Big Step for Media about Atheists 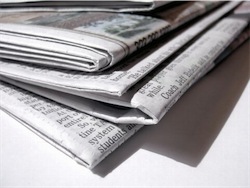 We nontheists are becoming part of the media’s collective consciousness. If you ever talk about, write about, or have any interest in atheism in America, you should seriously consider checking this out: the news service Religion Link just released an incredible and extensive resource about the movement: Freethinkers: A source guide to atheists, humanists and other nontheists. They put it together primarily to help journalists write stories about nontheism, but it can be valuable for anyone interested.

Why is this important? It’s a sign of the times – nontheism is gaining prominence. We’re expecting our public presence to grow and we were all delighted to help develop the resource. I’m in favor of anything that makes it easier for reporters to write accurate stories about us. ReligionLink puts it well right near the beginning:

As America grapples with competing notions about its identity — Christian nation, pluralistic melting pot, secular society — an understanding of the country’s nontheists is vital. The concerns and influence of this segment of society seem destined to touch all Americans’ lives.

If I were a reporter, I would be salivating. We’re a hot topic and this source guide gives movement history, story ideas, media contacts, survey data, past news articles about the movement, online communities, books published, and on and on… The Secular Student Alliance (my organization) and the Secular Coalition for America sent out a joint press release praising the guide and remarking on its significance:

“Secular Americans will play an increasingly prominent role in the national discourse, and so this new resource is both welcome and necessary. In the media and in Washington we will increasingly speak out for human rights when they are infringed upon by the commingling of church and state,” said Sean Faircloth, Executive Director of Secular Coalition for America. “There are at least 30 million nontheistic Americans. That number is growing and the media wants to know more about us.”

The project was initiated by the Stiefel Freethought Foundation, the same organization that just gave the SSA a big grant to help us support more atheist teens.

Said Foundation president Todd Stiefel, “The American public deserves the chance to get to know their nontheistic neighbors – their fellow Americans – and find that we are a community of loving, moral and joyful people. This resource can give journalists the tools they need to tell our story in full.”

RAmen and so say we all.

Hemant and Friendly Atheist itself are both included in the guide (as am I). Go check it out!

October 7, 2010
Ask Richard: New Dad Misses the Belief that God Will Protect his Daughter
Next Post