Actually, I’ve missed just about every episode of Glee… but I know enough about it to download the soundtracks and realize that last night’s episode was all about faith.

Reader Kate, who writes the very-well-written-and-why-wasn’t-I-reading-this-before Suburban Sweetheart blog, was nice enough to explain the episode to me. And now, to you.

There are a couple spoilers in case you plan to watch the episode later. You’ve been warned.

After seeing last Tuesday’s preview, I was excited for the new episode of Glee for two reasons.

But a mere three minutes into last night’s show, I was already uncomfortable. It wasn’t just that Finn claimed to see Jesus in his grilled cheese (“Grilled Cheesus”), which was funny, or that he asked Mr. Shue if the Glee Club could perform songs praising Christ, which was unfortunately a bit too reminiscent of my own high school choir experience. No, it wasn’t just those pieces of the plot: It was Kurt‘s story that made me squirm. 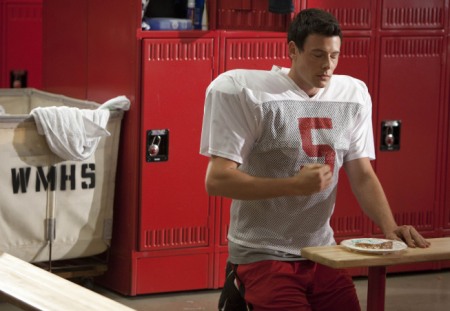 Kurt is the gay kid who angrily shuns religion because, he says, if there were a God, S/he wouldn’t have given him a life of being gay, a life of bullying and belittling. Within the first 10 minutes of the episode, Glee‘s portrayal of Kurt as an atheist sets up two unfortunate and all-too-prevalent stereotypes: that of the angsty homosexual & that of the militant atheist.

Across the board, the other Glee Club members, Christians & Jews alike, are shocked by Kurt’s admission that he doesn’t believe in God. Throughout the show, they try to talk him out of atheism and into religion, never once acknowledging that he’s entitled to his own beliefs — or lack thereof — or showing any respect for his views. In fact, the only character to defend Kurt’s atheism as a legitimate world view is Sue Sylvester, the show’s antagonist, who goes on to use his atheism as a tool of manipulation to help sink her arch nemesis, Mr. Shue, for permitting religious music in Glee Club. This is where I should note that, in writing this, I’m also ignoring the show’s inaccurate portrayals of church/state separation and what is and isn’t permitted in public schools; last night’s episode toed across the line there, too.

(Hemant adds: Sylvester said the following in the episode:

“Asking someone to believe in a fantasy, however comforting, is an immoral thing to do. It’s cruel. It’s as arrogant as telling someone how to believe in God, and if they don’t accept it, no matter how open-hearted or honest their dissent, they’re going to hell. That doesn’t sound very Christian, does it?”

Interesting… Now, back to Kate.)

The most unfortunate part of the episode is that the story line was valid: Kurt, terrified of losing his father to a heart problem, is genuinely struggling to deal with his pain; his friends want to help, but they’re not sure what they can do for an atheist who doesn’t want their prayers — because prayer is the most common way they know of for dealing with such situations. Yes, it was a believable plotline — but if Glee wanted to teach an important lesson, as it has so often done, there was ample opportunity to do so in a way that didn’t offend. The writers could’ve focused on Kurt pushing his friends away as a result of his dad’s condition, a natural but unhealthy reaction to dealing with fear. They could’ve lessened the strain, the anger, the push-&-pull between the religious members of Glee Club and the one atheist member. “I appreciate your thoughts,” Kurt tells them, “but I don’t want your prayers.” And not one of them will accept that: They show up at his father’s bedside to pray. They dedicate church services to him. They try to sing songs about God’s grace. And never once does anyone but Sue Sylvester stop to recognize how offensive it is to push your beliefs, no matter how well-intentioned, upon someone else — especially when that person is already enveloped in hurt and grief.

While I typically appreciate “Glee’s” depictions of diversity — in many cases, its sense of humor and refusal to be politically correct in order to make important observations about society — I was undoubtedly disappointed in the way the writers opted to depict Kurt’s atheism. But you know what? It didn’t do much for religion, either. Why do the other Glee Clubbers have to be so forceful in insisting that they pray for Kurt’s father, both in front of and to Kurt? Couldn’t they have kept it to themselves? And out of school? Their insistence that Kurt recognize the power of prayer is just as dangerous in its characterization of all people of faith as pushy, well-intentioned zealots as was the show’s portrayal of Kurt as a defensive, angry atheist. (Not to mention that I was frustrated that the episode described religion, in blanket terms, as being intolerant of homosexuality — NOT the case for all of us!)

At the end of the show, though, I suppose the atheist wins. After all, Kurt is the only character to recognize his friends’ good intentions and overlook their hurtful actions because of them. His friends and educators, for their part, never really recognize that they’ve hurt him or apologize for doing so. And though Mercedes concedes to understanding that he doesn’t believe in “the power of prayer,” she continues to passively urge him to find God, indicating that she cannot conceive of the wrongness of her actions toward her friend.

On this point, the only credit I give the writers of Glee for last night’s episode is that (spoiler alert!) the episode did NOT end with Kurt’s becoming a believer, which would’ve been an even bigger letdown, and it did address the things that he, as an atheist, turned to instead of religion to get him through a difficult time. The memory montage of his childhood — including his mother’s funeral — was set to his emotional performance of The Beatles’ “I Wanna Hold Your Hand,” the one song of the night that (purposefully) didn’t reference God or religion as a means of highlighting his faith in family and love as a source of personal strength. He did, however, allow Mercedes take him to her church, where she performed “Bridge Over Troubled Water” for him, and where he ultimately accepted his friends’ prayers for his father as an act of friendship, not of proselytization. Unfortunately, the grief it took to make these few progressive points wasn’t worth all the other reprehensible depictions both of atheism and of religion. I wish the writers had explored other creative ways to incorporate religious tunes (which is, really, a fun concept!) into an episode and to address faith (and the lack thereof) without turning the entire cast into an offensive — and largely incorrect — parade of stereotypes.

Your thoughts on last night’s episode?

October 6, 2010 Want to Win An Election? Turn to God
Browse Our Archives
What Are Your Thoughts?leave a comment