Druidry In An Uncommon Place…

Druidry is now an official religion in Britain:

Druidry, an ancient Celtic belief that worships deities who take their forms in nature, has been given the official status of a ‘religion’ in Britain. It is a form of neo-paganism, along with Wicca, Voodoo and Shamanism. Surprisingly enough the belief system is already provided with tax-exempt religious group status in the US.

… Neo-pagans seek to communicate with spirits, but witchcraft is not satanic because its believers don’t recognize the Satan of Christianity, Judaism or Islam.

Umm… right. I don’t understand how anyone could call Satan silly … and then turn right around to talk to “spirits.”

Still, it made me think of this picture I took during a recent visit to Lynchburg, Virginia. 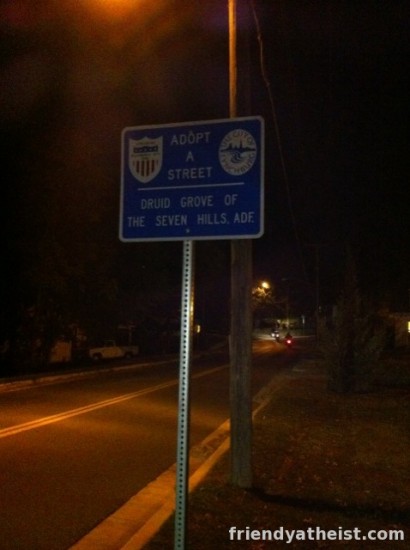 It appears that the local Druid Grove of the Seven Hills, ADF has adopted a street… right next to Thomas Road. Which is where Jerry Falwell’s original Thomas Road Baptist Church still remains. The church is about a one minute walk away from the sign.