Yesterday, I ran my first 5K. You all gave me excellent advice and I used absolutely none of it.

Dinner the night before the race? Indian food.

Breakfast the day of the race? Donuts.

Warmup? Who needs that.

Clearly, I was destined to win this race. 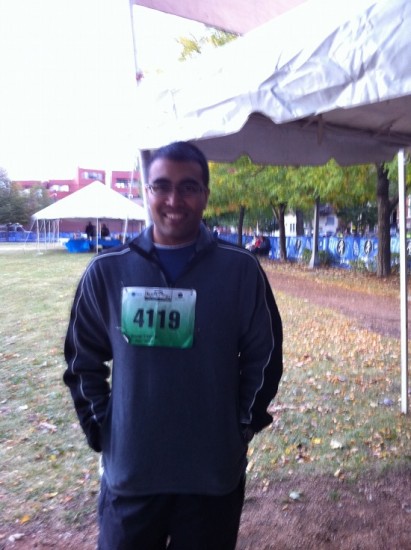 Here’s how things went down:

Me: We’ve only gone two blocks. Why are people running in the opposite direction?

Ladyfriend: Because they’re almost done with the race.

Me: This is the most I’ve ever run ever. I think I’m gonna die.

Ladyfriend: Stop dying! We’ll walk for a bit and then run to that stop sign up ahead.

Me: [Panting] Are we almost done?

Ladyfriend: We’re going to sprint the rest of the way!

[She splats on the ground]

Ladyfriend: My hands are bleeding 🙁

[She runs ahead and beats me by a couple seconds]

That’s how I remember it, anyway.

She got checked out by a local medic… other than the gaping holes in her hands, I think she’s ok. 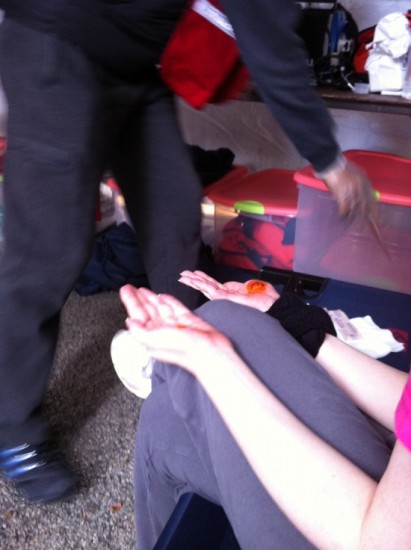 (Yep, I’m the good guy, taking a picture while she’s in pain. Got video, too!)

— I’m on p. 66 of the official results page. There are only 71 pages. You can never hold this against me.

— I suppose there’s something to be said for training…

I asked the ladyfriend if she wanted to add anything to this summary. She suggested the following:

He survived. But he got beat by a girl. Who was injured.

As for her parents, we all ended up driving to the 5K together, so I got to meet them after all. Nice people 🙂

Somehow, I’m doing another 5K in two weeks. I swear it all sounded like a brilliant plan before I actually had to do it…

October 3, 2010
A Question About T-Shirts and Manners…
Next Post