The Rock is a notable part of Northwestern University.

With the first painting of the rock in the 1940s, it became a canvas for student art, opinions, advertising, messages, proposals, and jokes. Tradition holds that if a student wishes to paint something on the Rock, he or she must guard it from sunup until the early morning hours (24 hours) before painting. Many student groups start guarding even earlier to ensure that they will be able to claim the Rock for whatever event or date is being advertised.

The Secular Humanists for Inquiry and FreeThought (SHIFT) secured The Rock on Blasphemy Day, painted it completely white, and encouraged students to write anything they wanted on it, blasphemous or not — over 100 students ended up participating. 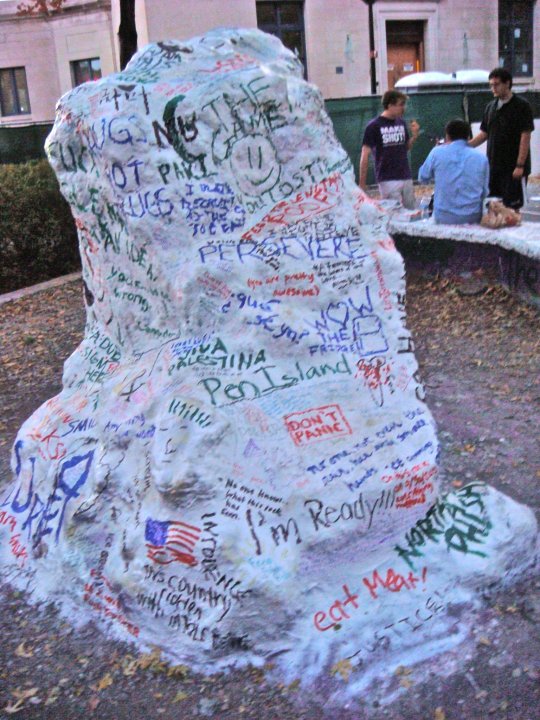 There was a little religious blashpemy… 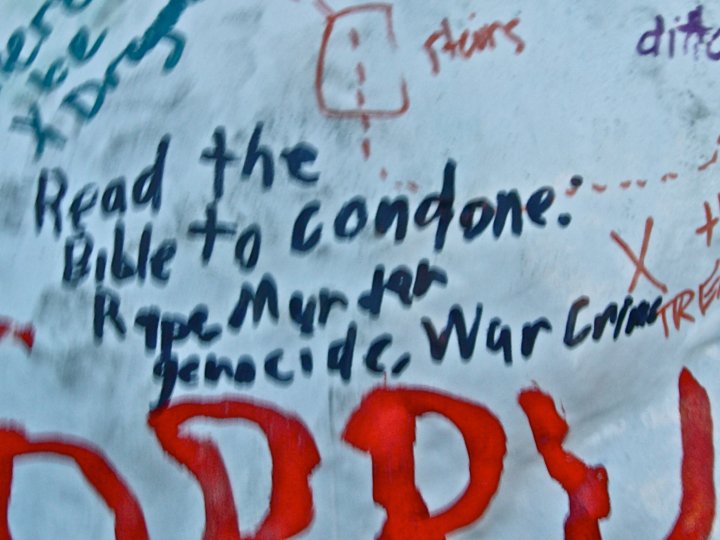 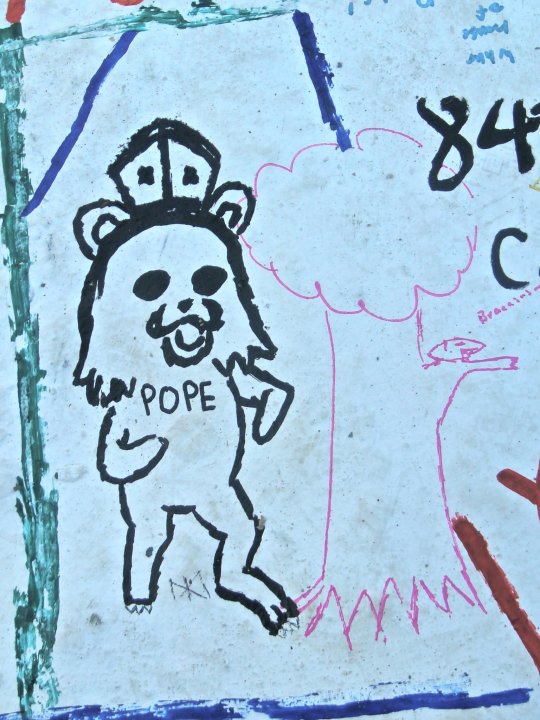 A little bit of blapshemy that wasn’t religious: 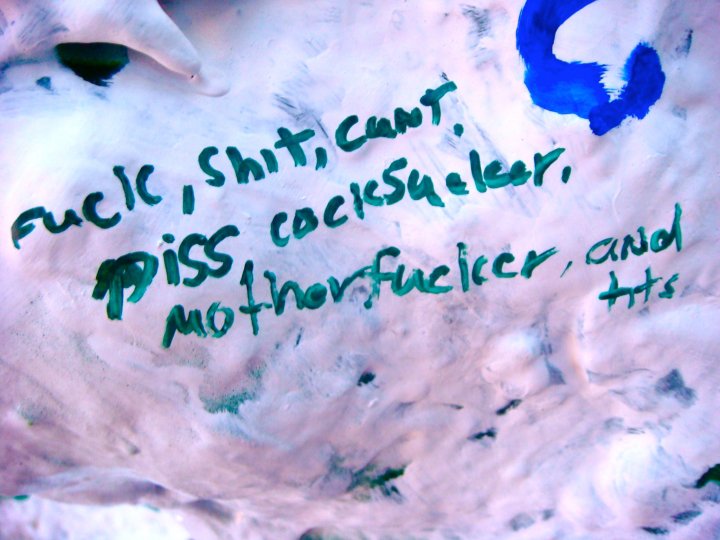 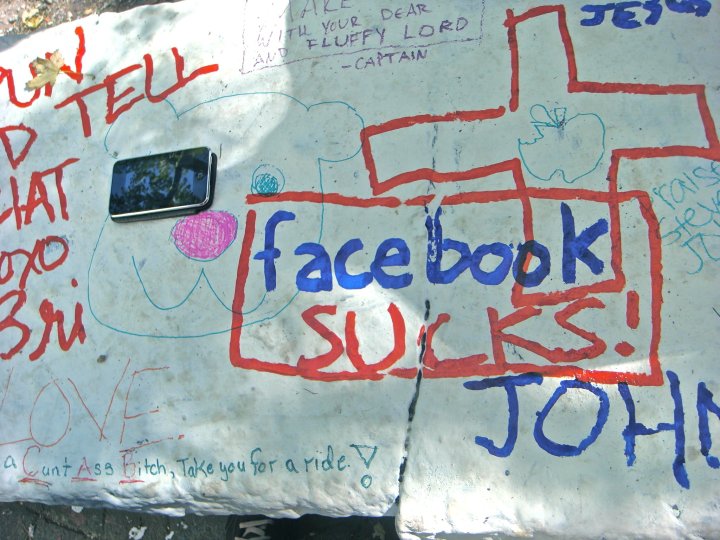 A little opposition to the blasphemy… 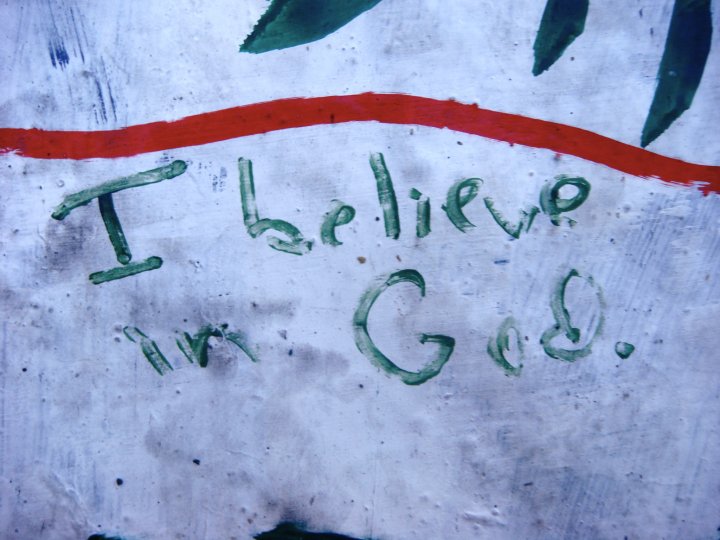 A little bit of PostSecret… 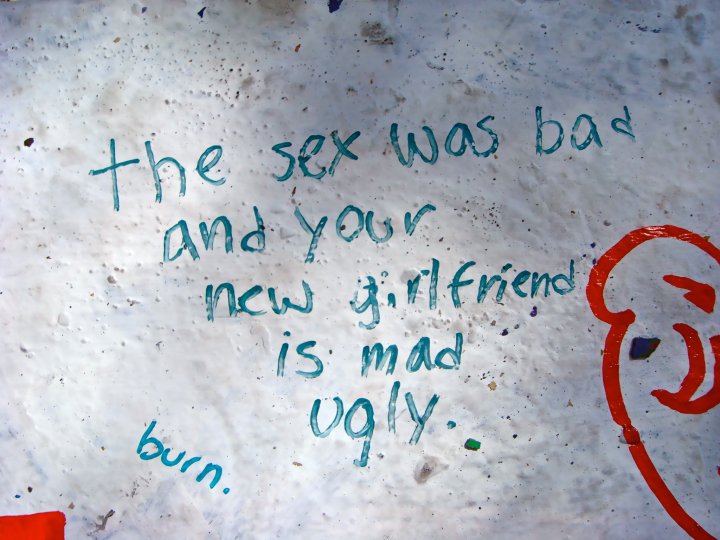 And a little lot of penises: 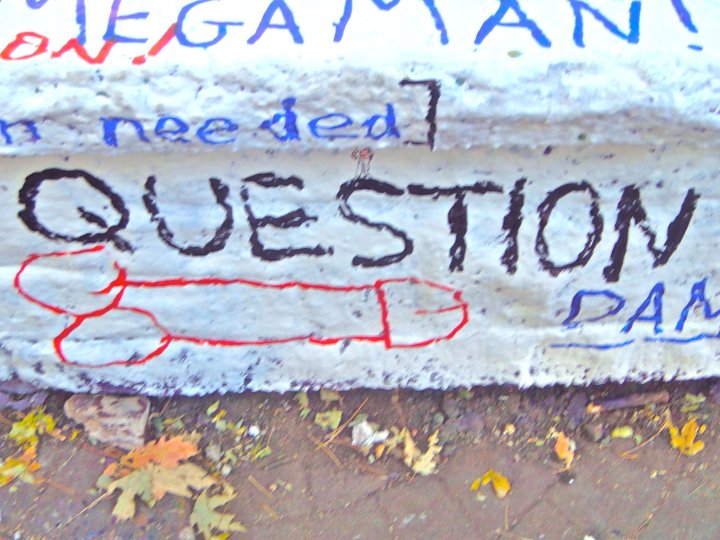 There’s a whole slew of additional pictures here. And, if you can access it, even more on Facebook.

The Daily Northwestern covered the event. The reactions reported in the piece are all the more reason to try this again next year:

“We’re all pretty good at blaspheming,” said Harry Noble, [SHIFT’s] events coordinator. “We figured we’d give the rest of the campus a try.”

While several writings attacked religion, no one appeared to attempt to draw the Prophet Muhammad — a controversial action that has been associated with SHIFT since last spring.

One student who stopped to write on the Rock, Emily Kaht, said she was surprised at some of the images and phrases students had chosen to write.

“I’m kind of disappointed that NU students, on the whole, are so profane and judgmental,” the Weinberg sophomore said.

Kaht wrote two phrases on the Rock, she said — one that said “Rachel isn’t good enough for Finn,” a reference to the show Glee and the phrase, “That is real,” to which someone added “-ly gay.” Kaht said she was offended by the addition and planned to cross it out.

Though some students were offended, SHIFT members said the day was a success. The group plans to repeat the event next year.

“It looked perfect,” [SHIFT president Cassy] Byrne said. “It was exactly as we envisioned it.”

I love these events that encourage people to write things they would normally fear saying. Let them blaspheme, whatever that word might mean to the artists. Yes, that means some admittedly offensive, mean-spirited, untrue things could be included in the list… but the whole point is to have one place on one day where you can say anything you want without any fear of repercussion.

While some of those statements may rightfully be cause for punishment in the “real world,” not all of them are. Like religious criticism. Let’s not be afraid of calling out religious beliefs as mythical, foolish, and harmful.