The Success of a ‘Stone-a-Heathen’ Fundraiser October 1, 2010 Guest Contributor

The Success of a ‘Stone-a-Heathen’ Fundraiser

(Hemant’s note: This is a guest post by Kelley Freeman. She’s a sophomore Art major/Russian minor at the University of South Carolina who can crochet like a fiend. She is currently the co-humanist outreach director for the Pastafarians at USC.)

On September 30th, the Pastafarians at USC hosted our first huge fundraiser: Stone-A-Heathen.

We partnered with Amnesty International and raised money to fight stoning in Iran and other countries where stoning still unfortunately exists. The idea was that to ‘stone’ a heathen, one could purchase a water balloon (for a mere dollar!) to throw at the Pastafarian of their choice. The UGAtheists proved last month that this could be successful and fun as a publicity stunt, but we were curious (and a bit scared) to see how well it would work as a fundraiser. 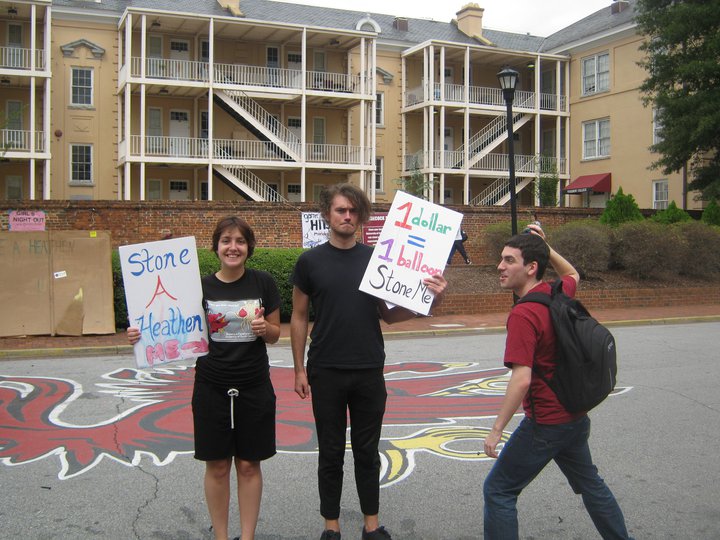 We had some interesting problems in our quest to hold our event.

For starters, we had to convince our campus organizers to let us host it in the first place. (“Stone-A-Heathen” is admittedly a very odd name for a fundraiser.)

Then we wanted to use Bible verses. We wanted to make a statement about how Abrahamic religions are the basis for stoning (it’s most prominently mentioned in Leviticus and Deuteronomy in the Old Testament/Torah). We were told we could not do this — not that we couldn’t make the statement, but that we couldn’t use the verses at all because they could be considered disrespectful, especially if water balloons were thrown at the verses on our backdrop.

We understood where organizers were coming from, so we asked if we could still have signs with Bible verses on them as long as there were no water balloons being thrown at them. This was acceptable. We could have been more irritated about the fact that we weren’t allowed to throw water balloons at the Bible verses — on Blasphemy Rights’ Day — but the fact that we were able to use them at all was appreciated. We love our university and the campus organizers are wonderful to work with; we didn’t want to piss them off. (After all, we do want to hold events with their support in the future.) 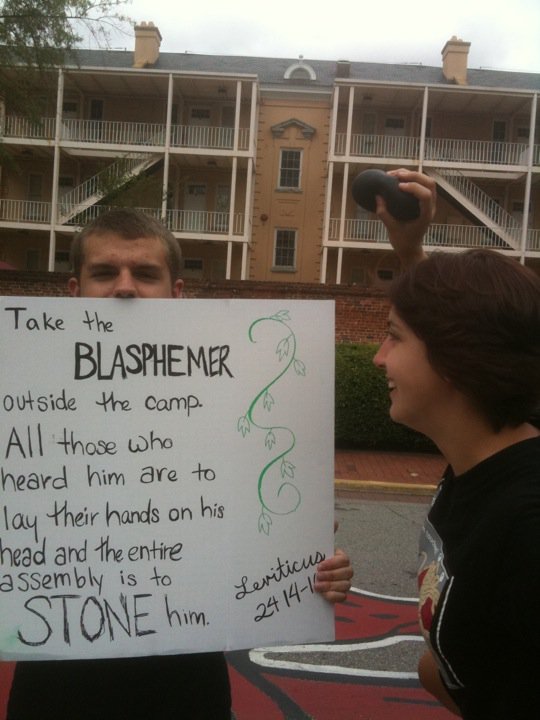 Then came the weather. We nearly cancelled the event! The weather has been terrible the last few days — cold, rainy, overcast — not good for throwing water balloons (or getting soaked with them). We were prepared to go through with it, though; we had wetsuits! We considered canceling early and rescheduling for next week if the weather became horrible, but thankfully, due to divine intervention (joke!), the weather was just as perfect as it could be. It was over eighty degrees and sunny for the three hours we were out there.

People were not as keen as we had hoped to stone us. 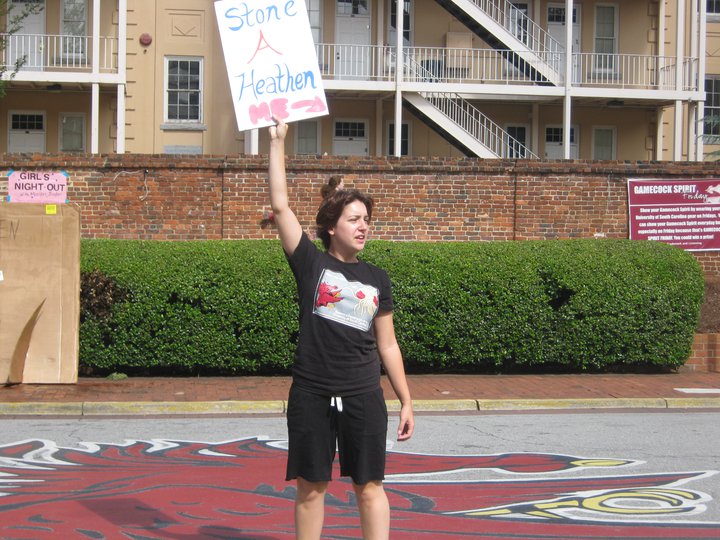 Many of them perhaps felt like we were mocking them (we are the Pastafarians, so I understand this), but we barely mentioned scripture. We asked them if they wanted to donate a dollar towards Amnesty and in doing so they could get a water balloon and “stone” us. The odd thing about this was how many people claimed to be Christian and that it was “against their religion” to stone people. I couldn’t help but listen to what they were saying while glancing at the Leviticus verse on my sign. I know that the Pew survey shows that people don’t know their own religion, but this was just dumbfounding.

There were a lot of people who looked curiously at our signs and laughed. A lot of people donated but didn’t like the idea of correlating a fun event like this to the seriousness of actual stoning. They felt like we were trivializing the pain and brutality of lapidation. I understand where these people are coming from, but we felt that raising awareness and funds was worth them being offended. There are people on my campus who don’t know stoning still takes place. To raise their awareness is worth the slight discomfort.

What really made this event worthwhile was the fun we had doing it. I don’t know that we’ve ever had as many people from the Pastafarians out on Greene Street tabling and raising awareness. We had at least twelve members come out to work the event, plus several others who came in support! We laughed, generated a lot of buzz, called people out, and just had a genuinely good time. Even our university mascot — Cocky the Gamecock (really) — came out and ‘stoned-a-heathen’! 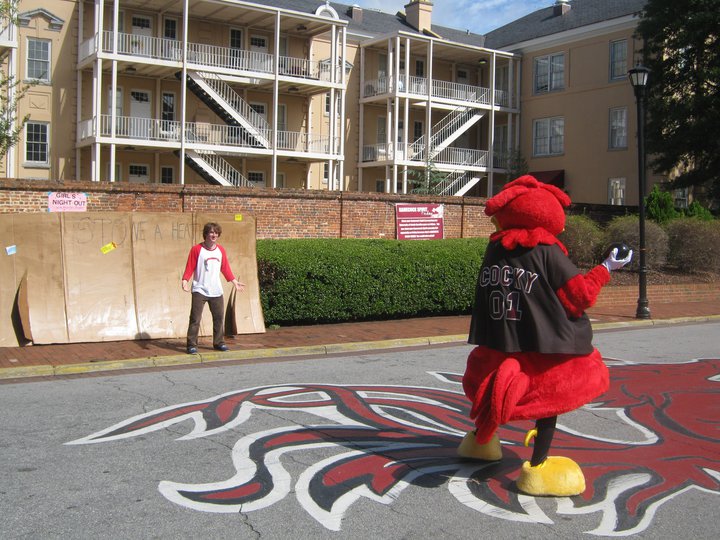 Amnesty International was also a great group of people. They were so nice and came out to table with us. It’s not always easy to find an organization willing to work with a non-theist organization, but they were great!

All of that fun and insanity cost us $8 for balloons. Meanwhile, we raised $140 for Amnesty International! We hope to see other campuses doing it next year.

(Just for future reference, it is really hard to find water balloons in September. Harder than we expected, anyway. Also, filling up water balloons in the mens’ bathroom is far too entertaining of an experience.)

October 1, 2010 The Effect of a Hug-An-Atheist Campaign
Browse Our Archives
What Are Your Thoughts?leave a comment