What Do Christians Really Think About Their Pastors? September 27, 2010 Guest Contributor

What Do Christians Really Think About Their Pastors?

Christian David Hayward has an idea of what people actually think about when they’re in church. 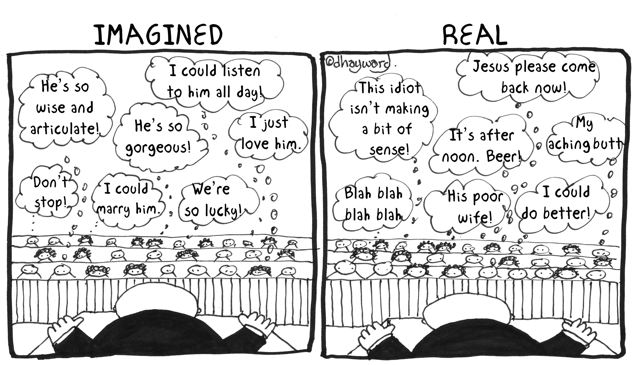 One of the biggest problems with the Christian church — that I’ve seen from the outside looking in — is that there are too many people who think their pastor speaks for them. When the pastor says something abominable or incorrect, they let it slide. They remain in the church, stay silent on those issues, and the cycle continues.

When a pastor says homosexuality is somehow “more” of a sin than anything else, or that evolution is bunk, or that religion in our public schools would alleviate some problems, how rare is it for a member of the congregation to say (in some form or another), “No, you’re wrong”?

While the pastor may be the face of the church and the most notable figure there, he doesn’t always have to speak for you.

It’s ok to disagree with him.

It’s ok to call him out when he says something that’s not true.

It’s ok to leave the church if you don’t support what’s being said in there.

If you’re not doing those things, you’re just adding to the problem. I get that you might be ruffling feathers and creating awkward social situations by speaking out… but what’s the alternative? Living a lie and pretending like you agree with the crowd when you really don’t? Maybe if Christians had the courage to speak out against some of the awful/untrue things their pastors said, we could take them a little more seriously.

It’s amazing how many Christian bloggers/authors I see making fun of the church (politely, of course), or speaking out against some of the church’s practices, or denouncing what some church members do in the name of faith… and then return to those same kinds of churches on Sunday and act like everything is ok. It’s those *other* churches with the problems, not my own.

I feel like atheists have no problem saying those things to other atheists. We criticize each other all the time. Read the comments on a random atheist blog and you’ll see that. No one in our movement is immune.

Reading the comments on Christian blogs, I see a lot of platitudes and only the occasional (often meek) rebuttals.

I’m sure there are some people who don’t hesitate to offer constructive criticism at church. But I’d be shocked if that number wasn’t in the minority.

Where are the pastors who want open, honest feedback and who are willing to apologize or change their minds when confronted with the evidence against whatever they said? (Have you ever heard a pastor say he was wrong about a previous sermon? I’d love to hear about it.)

What are Christians doing to make the conversation less of a one-way street?

Why do Christians stay in these churches where there are so many alternatives for them out there?

Am I being too naïve in thinking this ought to happen more often?

September 27, 2010
Ask Richard: Surrounded by a Trio of Reproachful Believers
Next Post

September 27, 2010 Francis Collins: I Have Not Seen Evidence for Medical Miracles
Browse Our Archives
What Are Your Thoughts?leave a comment