How Ignorant About Religion Are Religious Americans? September 27, 2010 Guest Contributor

How Ignorant About Religion Are Religious Americans?

The Pew Forum on Religion and Public Life has just released a new study on US Religious Knowledge.

The conclusion: Too many people know jack about faith.

More than four-in-ten Catholics in the United States (45%) do not know that their church teaches that the bread and wine used in Communion do not merely symbolize but actually become the body and blood of Christ. About half of Protestants (53%) cannot correctly identify Martin Luther as the person whose writings and actions inspired the Protestant Reformation, which made their religion a separate branch of Christianity. Roughly four-in-ten Jews (43%) do not recognize that Maimonides, one of the most venerated rabbis in history, was Jewish.

In addition, fewer than half of Americans (47%) know that the Dalai Lama is Buddhist. Fewer than four-in-ten (38%) correctly associate Vishnu and Shiva with Hinduism. And only about a quarter of all Americans (27%) correctly answer that most people in Indonesia –- the country with the world’s largest Muslim population –- are Muslims.

If you want to take a mini-version of the quiz yourself, click here. How’d you do?

The full version of the questionnaire can be found here (PDF).

At least there’s a familiar label atop the religious knowledge chart: 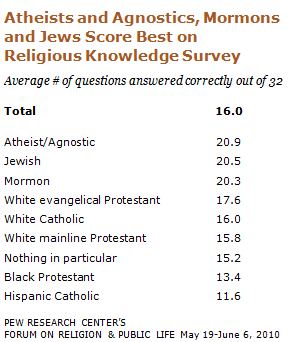 It’s not surprising that non-religious people know more about faith than people who are usually isolated within their own religious community.

Why is that? It’s easy to suggest it’s because we’re usually better educated than the rest of the population. But it’s probably more complicated than that. Hell, many of us left religion for a reason — we learned too much about it. That helped push us away from faith altogether.

Why else do you think we scored the best?

The LA Times is much more blunt about the results:

If you want to know about God, you might want to talk to an atheist.

Heresy? Perhaps. But a survey that measured Americans’ knowledge of religion found that atheists and agnostics knew more, on average, than followers of most major faiths. In fact, the gaps in knowledge among some of the faithful may give new meaning to the term “blind faith.”

Why did atheists fare so well?

American atheists and agnostics tend to be people who grew up in a religious tradition and consciously gave it up, often after a great deal of reflection and study, said Alan Cooperman, associate director for research at the Pew Forum.

“These are people who thought a lot about religion,” he said. “They’re not indifferent. They care about it.”

I should frame that…

According to Greg Smith, one of the authors of the survey:

Smith has a theory about why atheists did so well on the quiz — they have thought more about religion than most people.

“Very few people say that they were raised as atheists and agnostics,” he explains.

About three out of four were raised as Christians, he says.

“They were raised in a faith and have made a decision to identify themselves with groups that tend to be fairly unpopular,” atheists and agnostics, he says.

“That decision presupposes having given some thought to these things,” which is strongly linked with religious knowledge, he says.

“I have heard many times that atheists know more about religion than religious people,” Mr. Silverman said. “Atheism is an effect of that knowledge, not a lack of knowledge. I gave a Bible to my daughter. That’s how you make atheists.”

There’s a whole different discussion in those last couple sentences, but I love that line: “Atheism is an effect of that knowledge, not a lack of knowledge.”

The most interesting result from the survey deals with misinformation — it’s the kind that I see so often propagated within the evangelical Christian community:

… the single question that respondents most frequently get right is whether U.S. Supreme Court rulings allow teachers to lead public school classes in prayer. Nine-in-ten (89%) correctly say this is not allowed. But among the questions most often answered incorrectly is whether public school teachers are permitted to read from the Bible as an example of literature. Fully two-thirds of people surveyed (67%) also say “no” to this question, even though the Supreme Court has clearly stated that the Bible may be taught for its “literary and historic” qualities, as long as it is part of a secular curriculum. On a third question along these lines, just 36% of the public knows that comparative religion classes may be taught in public schools. Together, this block of questions suggests that many Americans think the constitutional restrictions on religion in public schools are tighter than they really are.

Or in graphical form: 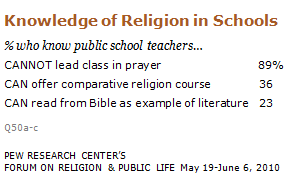 I’m not surprised here, either. They didn’t say this was only Evangelical Christians guilty of the ignorance, but it’s that group that tends to have unnecessary persecution complexes. They don’t seem to understand that there’s a difference between private practice of religion and public promotion of it.

It’s not that difficult to understand. But the truth would ruin the narrative that’s built up in so many megachurches. So many churchgoers remain ignorant.

Other quick nuggets from the survey:

Respondents who went to graduate school answered twice as many questions correctly as people who didn’t complete high school.

Overall, men scored better than women, whites score better than blacks and Hispanics, and Southerners did worse than the rest of the nation, Smith said.

In summary: The more steeped in religion you are, the less you know about religion as a whole.

We’re a nation of religious illiterates.

At least non-religious people are able to get a better sense of what foolish ideas everyone else has.

***Update***: This post has been added to since it originally went up.