Remember this billboard that the Freedom From Religion Foundation recently put up in Oklahoma?

The billboard reads “Atheism is OK in Oklahoma,” but members of the group Freedom From Religion say that’s not always the case and that’s why they chose to pay for the sign.

“We want to let people know they’re not alone. There are other people that are sane in the state too. Not everyone in Oklahoma is superstitious,” said Bill Dusenberry, Freedom From Religion Foundation.

Sounds all well and good — it’s a positive message. (Though I still say the “Gore” reference is lost on just about everyone.)

Still, it must be effective because a Christian running a competing billboard advertising company took out an ad of his own: 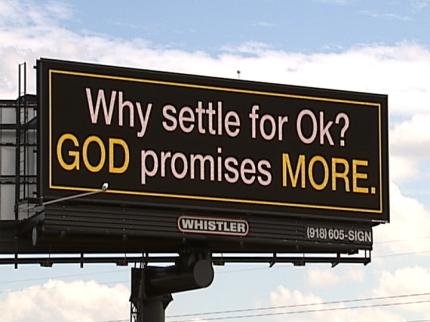 “When you have 80,000 to 100,000 people driving by that sign every day, it’s our name on that sign,” said Gabe Sherman [of Whistler Outdoor Advertising]. “We look at our core values. Does it match up with who we are, and can we put it up there and feel good about it?”

Whistler decided it couldn’t and this week even opted to display a direct response to the atheism ad. Among the ads displayed on its ten digital billboards are ones that read, “God is More Than OK in Oklahoma,” and “‘Why Settle for Ok? God Promises More.”

The Freedom from Religion Foundation says it has no problem with the dueling billboards.

“They want to impose their beliefs on me, while I don’t want impose anything I believe on them,” Dusenberry said.

It should be noted that God “promising more” doesn’t say much when it’s compared to “nothing.”

But as Dusenberry admits, all publicity is good publicity. The atheist billboard just got more column space and airtime. And if any of these billboards will have more of an impact on the local citizens, I have to think it’s the atheist billboard which is far more unique than the alternatives. A billboard in Oklahoma saying you like God stands out as much as a brand new weed in an already large garden.

September 26, 2010
Give the Holy Books a Resting Place
Next Post