A few months ago, I asked people for their secular wedding vows — what they said at their weddings that had nothing to do with anything godly — and they delivered.

Steven and Rea got married back in July. Since their wedding took place after my posting, Rea promised she’d update me with information about what they did throughout the ceremony.

And the wait was worth it. This wedding sounds (and looks) like it was amazing.

We released Painted Lady butterflies instead of having the bride given away. The parents released them symbolizing the release of children into the world. The chemical reaction of ammonium iron sulfate and potassium hexacyanoferrate to form Prussian Blue was our unity ceremony. 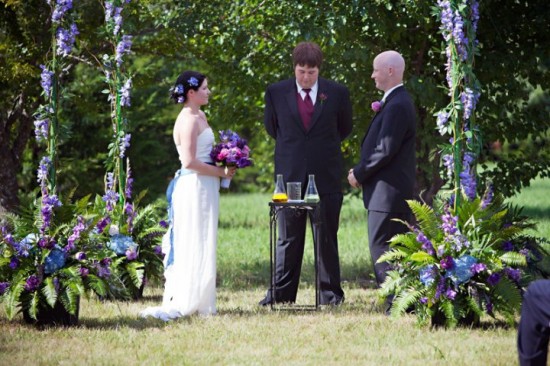 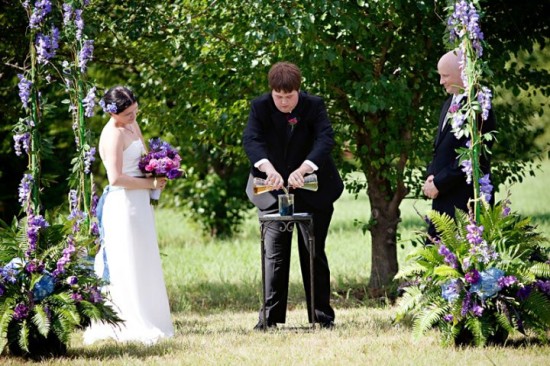 When we kissed, rockets launched. In lieu of favors, we donated over $500 to the Nature Conservancy, the ACLU, and the National Center for Science Education. 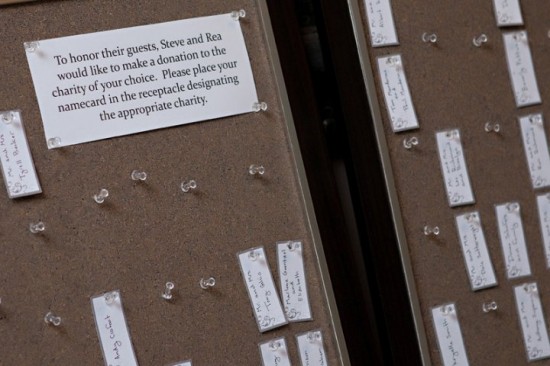 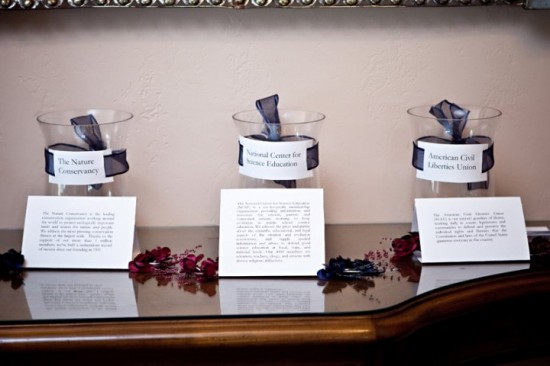 Our first dance was to “I’m Your Moon” by Jonathan Coulton. I’ll attach our Save The Date and the Program. 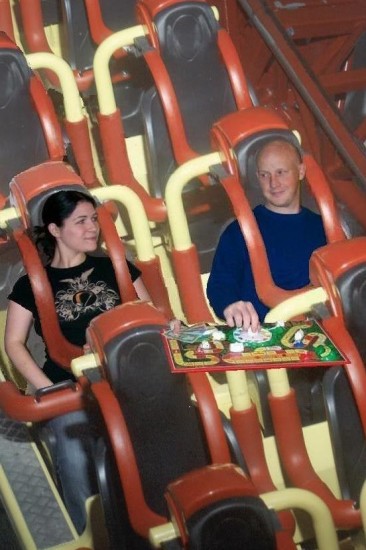 In case you missed the reference in the Save the Date card, that’s an homage to XKCD. 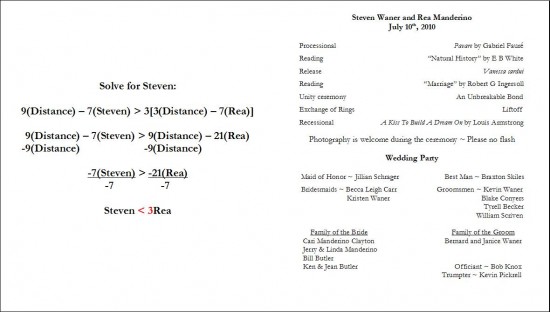 I approve of math humor in wedding programs.

And the script for the wedding was as follows:

Dearest friends and beloved family, we are gathered here to bear witness to the marriage of Rea Manderino and Steven Waner. It is our privilege to be present and to be able to share our love of them as they begin their one life together.

We begin with this poem by E B White: The Spider’s Web (A Natural History)

The spider, dropping down from twig,
Unfolds a plan of her devising,
A thin premeditated rig
To use in rising.

And all that journey down through space,
In cool descent and loyal hearted,
She spins a ladder to the place
From where she started.

Thus I, gone forth as spiders do
In spider’s web a truth discerning,
Attach one silken thread to you
For my returning.

Rea inscribed this poem to Steven on the back of a memorable picture before she left for college in Chicago, and so, their long-distance relationship began. The poem was her promise to him that her journey out into the world was not forever, and that she would never detach from him. Neither of them was forewarned of the efforts needed to keep this connection. But, just as spiders silk is stronger than steel, their commitment to each other was resilient enough to see them through to this day. To our great delight, we now celebrate their partnership as they begin their lives together.

Entering the world is no mean feat, and none know this better than those that raise children. Parents nurture and teach their children to the best of their ability, to prepare them for their adult lives. To symbolize this transition, the families of Steven and Rea will release butterflies. The metamorphosis of these insects from squishy caterpillars to intricate adults is a transition we all go through, and just as the adult butterfly must emerge from its cocoon, so must children fly out into the world. [Butterflies are released.]

As for my introduction, I was Rea’s Residential Assistant in the housing system for her last two years of college; we graduated on the same rain-soaked day. We both had similar ideas about the importance of the housing system; it was a structure that allowed students to building meaningful relationships. We connected over this and have been close friends since. I remember many a time talking with her in the house lounge or in the kitchen and Rea would always mention her long-distance boyfriend Steve. The more we talked, the more I began to appreciate the deep connection between the two of them and their passion for each other. The first time I saw Steve, I was never properly introduced. I simply saw a glimpse of Steve’s back as Rea dragged him towards her room. I was finally introduced to Steve over a game of Guitar Hero.

I got to know Steve better through his visits to Rea and from Rea’s stories about him. Steve is not a man of many words, but when he speaks he does so with confidence and conviction. His time in the military, as both an enlisted soldier and as an officer, has helped shape him as a leader. He is deeply versant in his field and able to complete the tasks given to him. At the same time, he understands the efforts undertaken by his subordinates who reciprocate with respect and deference.

Looking beyond today, Rea will soon be heading to the University of Virginia to pursue here Masters degree in Environmental Science. Her ambition is to preserve and protect all of Earth’s creatures. Steve is working at the Missile Defence Agency, working to destroy evil. With all this that they have to look forward to, more important is the fundamental change they make today by entering into marriage.

This change will be both emotional and intellectual. Emotionally, the love between these two will expand and deepen, so that no force could drive them apart. Intellectually, they will learn more and more about their partner’s psyche and grow to appreciate all aspects of each other’s minds. Their hearts and minds will become as one.

Allow me to continue with a second reading, by Robert G. Ingersoll:

Marriage is the most important, the most sacred, contract that human beings can make. No matter whether we call it a contract, or a sacrament, or both, it remains precisely the same. And no matter whether this contract is entered into in the presence of magistrate or priest, it is exactly the same. A true marriage is a natural concord and agreement of souls, a harmony in which discord is not even imagined; it is a mingling so perfect that only one seems to exist; all other considerations are lost; the present seems to be eternal. In this supreme moment there is no shadow — or the shadow is as luminous as light. And when two beings thus love, thus unite, this is the true marriage of soul and soul. That which is said before the altar, or minister, or magistrate, or in the presence of witnesses, is only the outward evidence of that which has already happened within; it simply testifies to a union that has already taken place — to the uniting of two mornings of hope to reach the night together. The idea of contract is lost. Duty and obligation are instantly changed into desire and joy, and two lives, like uniting streams, flow on as one. Nothing can add to the sacredness of this marriage, to the obligation and duty of each to each. There is nothing in the ceremony except the desire on the part of the man and woman that the whole world should know that they are really married and that their souls have been united.

The best way I can describe this imminent change is by analogy. As a student of chemistry, I imagine Rea and Steve to be two distinct compounds [hold up two flasks]. To the naked eye, they appear similar. However, the true beauty that they bring to this world is in their combination [mix]. It is this reaction, their bonding to one another, inseparable by any force, it is this reaction that gives the world more happiness to just marvel at their love. This is something special. This is something unique. The gift of love they give each other is amplified by all here, we revelers in their mirth. This is why we’ve gathered, and this is why we praise them!

I now ask you both to answer as one:

Do you take each other in lawful matrimony? (We do.)

Will you love each other as long as you remain on the Earth? (We do.)

Will you care for one another, no matter the circumstance? (We do.)

Do you pledge your commitment to each other before your friends, your family, and the world? (We do.)

You may now place your wedding band on your partner’s finger to symbolize in noble fashion your undying love.

By the power vested in me, I now pronounce you partners in life.

Someone marry me NOW. I must take advantage of all these great ideas!