I Still Support the People Who Drew Muhammad

The topic: Molly Norris, the cartoonist who initially suggested Everybody Draw Muhammad Day, who later publicly regretted that decision, and who is now in hiding.

A few college atheist groups chose to draw Muhammad as a stick figure with a smiling face, hardly the same thing as the infamous drawing of Muhammad with a bomb on his head. Their intention was not to piss off one religious group, but rather to make the point that no one has a right to tell you what you can and cannot draw.

How dare Comedy Central censor Muhammad’s image on South Park? Why should cartoonists have to live in fear for their lives because they drew an image of Muhammad? Where are the moderate Muslims who practice their beliefs without forcing others to act the same way? If they don’t want to draw his image, so be it. If they think they can stop anyone else from drawing his image, they’re in for a welcome shock.

I’m all for building bridges with religious people in certain cases, but the Muhammad controversy was not one of them.

For example, popular atheist writer P.Z. Myers addressed Islam as if it were a single entity, writing: “Come on, Islam. Targeting defenseless cartoonists is your latest adventure in bravery? That’s pathetic. It’s bad enough to be the religion of hate, but to be the religion of cowardice ought to leave you feeling ashamed.”

I’m disappointed at such assessments, and I have a feeling Norris would be too…

Obviously, not all Muslims think identically. PZ knows that, too. But those Muslims’ voices — in support of free speech, despite it being “offensive” to them — were rarely heard in the wake of the controversy. Meanwhile, atheists were accused my Eboo Patel, among others, for drawing the equivalent of swastikas on the ground.

Chris mentions me, too:

Around the time of EDMD, the Council of American-Islamic Relations issued a statement asking that, instead of reacting negatively, “American Muslims — and Muslims worldwide — should use that and every other day as an opportunity to reach out to people of other faiths and beliefs to build bridges of understanding and respect. The best and most productive response… is more communication, not less communication — including not restricting the free flow of ideas.”

I applaud them for taking the high road, and I am sorry that my fellow atheists did not do the same. Instead, prominent atheists like Hemant Mehta said: “If you get offended by [EDMD], no one should be taking you seriously.”

That’s not totally fair. I expect Muslims to be offended by unfriendly depictions of Muhammad.

But if you read the post, I was referring this picture specifically: 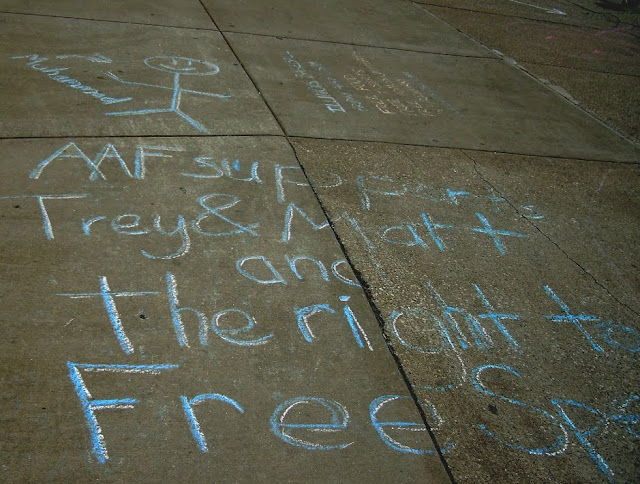 There’s Muhammad in the upper left.

Is that offensive? I say no. If you get offended by that, no one should be taking you seriously, anyway.

I stand by that.

If you’re getting into hysterics because you saw a happy stick figure with your prophet’s name on it, and you’re accusing others of committing evil, nasty, you-must-hate-Muslims “hate crimes,” then we should ignore you. Come back to us when you have a legitimate complaint.

Chris, though, takes the side of Eboo and blames the artists instead of only the people overreacting.

And though like me [Patel] disagreed with EDMD, he has also publicly condemned the extremists who reacted to it with threats of violence. The extremists who forced Norris to go into hiding do not represent his faith, and he and other Muslims do not deserve to have their identities maligned — by those extremists or by people calling Islam “the religion of hate.”

I don’t think for a second that the majority of Muslims side with the extremists.

But religious criticism — criticism of foolish and dangerous superstitions — isn’t the problem here. Neither are the students who chalked their campuses or the thousands of people who drew a Muhammad that day.

The only problem is with Muslims who couldn’t — and still can’t — deal with criticism (or mockery) of their beliefs. That includes moderates as well as the extremists.

I’m not impressed when moderate Muslims disavow the extremists and say they don’t agree with them. That should be a given. It doesn’t take a lot of courage to say, “I agree that violence is not the solution.”

I want to hear the moderates come out in support of free speech, including speech that goes after their religion. I want to hear them admit that the artists did absolutely nothing wrong in drawing the images. And then I want them to do everything they can to spread those ideas in their own community.

Chris says these Muslims are out there, and that’s good. Let’s help them share their message. If any Muslim wants to applaud those students brave enough to draw images that so many other people were scared to death of drawing, I’d be happy to let them say so on this site. Can you imagine a Muslim handing an atheist chalk so that he could draw an image of Muhammad? How’s that for PR to make the whole drawing campaign look silly.

Let’s not forget that no one would have drawn those images of Muhammad in the first place if the Islamic taboo against them wasn’t so damn ridiculous. The overreaction from Muslim extremists and moderates just showed that the rest of us were on the rational side of this issue.

***Update***: Here’s a fantastic list of Muslims who stand up for free speech instead of the religious nuttiness at play here. (Thanks to Corrie for the link!)

September 23, 2010
Go Hug an Atheist in Eastern Kentucky!
Next Post