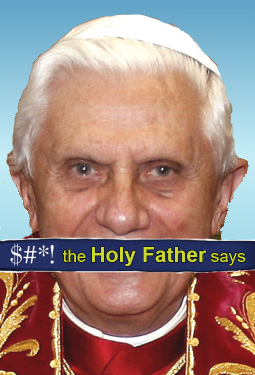 Pope Benedict sure was running his mouth upon arriving in the UK. Maybe he got a poor night’s sleep or maybe it was the way many Britons let him know he was not welcome. Whatever the cause, he lashed out at us with a strange Nazi accusation:

“Even in our own lifetimes we can recall how Britain and her leaders stood against a Nazi tyranny that wished to eradicate God from society and denied our common humanity to many, especially the Jews, who were thought unfit to live.

“As we reflect on the sobering lessons of atheist extremism of the 20th century, let us never forget how the exclusion of God, religion and virtue from public life leads ultimately to a truncated vision of man and of society and thus a reductive vision of a person and his destiny.”

Let us also never forget how a last alliance of Men and Elves stood against the Papal tyranny that wished to enslave everyone and rule the world in flame.  See?  I can make up my own version of history, too!

As PZ Myers says in what one commenter called the understatement of the year: “Oh, well, we knew he was going to spew lies. That’s nothing new. He’s the pope — he doesn’t care much about truth.” And then, on the other end of the spectrum reaction-wise, we have Richard Dawkins, who wasn’t taking it sitting down:

This statement by the pope, on his arrival in Edinburgh, is a despicable outrage. Even if Hitler had been an atheist, his political philosophy was not based upon atheism and had no connection with atheism. Hitler was arguably (and by his own account) a Roman Catholic. In any case he enjoyed the open support of many of the most senior catholic clergy in Germany and the less demonstrative support of Pope Pius XII. Even if Hitler had been an atheist (he certainly was not), the rank and file Germans who carried out the attempted extermination of the Jews were Christians, almost to a man: either Catholic or Lutheran, primed to their anti-Semitism by centuries of Catholic propaganda about ‘Christ-killers’ and by Martin Luther’s own seething hatred of the Jews. To mention Ratzinger’s membership of the Hitler Youth might be thought to be fighting dirty, but my feeling is that the gloves are off after this disgraceful paragraph by the pope.

I feel like bombarding every newspaper in Britain with letters of protest.

I am incandescent with rage at the sycophantic BBC coverage, and the sight of British toadies bowing and scraping to this odious man. I thought he was bad before. This puts the lid on it.

I wonder whether I would feel that incensed if it were my country the Pope were visiting. But then, I’m used to it and half expecting mudslinging at us atheists. But it was some of the things the Pope said about the child sex-abuse that got me angry:

He added, “It is also a great sadness that the authorities of the church were not sufficiently vigilant and insufficiently quick and decisive in taking the necessary measures.”

No. Just no. Sir, the institution of the church — and you personally — systematically helped to cover up the rapes and to intimidate the victims into silence. I would go on a rant here, but the article goes on to quote someone much more qualified:

“It’s disingenuous to say church officials have been slow and insufficiently vigilant in dealing with clergy sex crimes and cover ups. On the contrary, they’ve been prompt and vigilant, but in concealing, not preventing, these horrors,” said Joelle Casteix of SNAP, the Survivors Network of those Abused by Priests.

Another campaigner took aim at the pontiff personally.

“The pope affects the stance of a shocked bystander, when in fact he has been for decades the church’s central handler of sex abuse cases,” said Terence McKiernan of BishopAccountability, a group that tracks reports of abuse by priests.

September 17, 2010
Bill Maher on Koran Burning and the Mosque
Next Post