Just Say Nope to the Pope

The Pope is making a state visit to the UK this week. He has already made his presence known to atheists, when he compared us to Nazis. Jesse has more on that later today.

But before that, his visit itself prompted a number of Britons to write this open letter to him:

We, the undersigned, share the view that Pope Ratzinger should not be given the honour of a state visit to this country. We believe that the pope, as a citizen of Europe and the leader of a religion with many adherents in the UK, is of course free to enter and tour our country. However, as well as a religious leader, the pope is a head of state, and the state and organisation of which he is head has been responsible for:

Opposing the distribution of condoms and so increasing large families in poor countries and the spread of Aids.

Denying abortion to even the most vulnerable women.

Failing to address the many cases of abuse of children within its own organisation.

The state of which the pope is head has also resisted signing many major human rights treaties and has formed its own treaties (“concordats”) with many states which negatively affect the human rights of citizens of those states. In any case, we reject the masquerading of the Holy See as a state and the pope as a head of state as merely a convenient fiction to amplify the international influence of the Vatican.

That letter was signed by the likes of Richard Dawkins, Philip Pullman, Susan Blackmore, and AC Grayling,

The Skeptical Skull also points out the obvious: Not many people really want the Pope to make a visit to their country, anyway:

According to the National Centre for Social Research, in 2009 over 50% of those polled defined themselves as having “No Religion”. Next up was 20% considering themselves as Church of England, 17% as “Other Christian” and a mere 9% identified as “Roman Catholic”.

Of course this is just one study but if you look at it with another study carried out by the same research centre, in 2009 almost 60% of those polled who claimed to be religious, “never” go to church. The closest following statistic to this gaping hole of a contradiction was a mere 15% admitting to going to church “annually”.

You can see more of these statistics and some shiny graphs here.

Ok. So what do these statistics show? Well to me, they show that the UK tax payer is footing the bill for someone who represents a tiny fraction of the interests of the British public AND those people heralding the importance of such a visit don’t even go to church all that often. Talk about hypocritical!

Meanwhile, Dawkins, Christopher Hitchens, and Sam Harris have commissioned the writing of a book due out in a couple weeks: The Case of the Pope: Vatican Accountability for Human Rights Abuse: 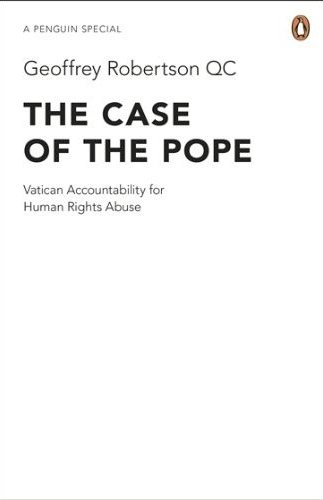 I know. That’s a cover designed to sell. Couldn’t they get a picture of Benny on it?

Is anyone excited about this guy visiting?

It doesn’t seem like it, at least compared to previous papal visits. As one headline said, “Even Susan Boyle Couldn’t Draw Crowd To Mass.” They were hoping for 100,000 people, but “ticket sales… have been sluggish.”

For those of you who live in that part of the world, what’s the reaction you’re hearing? Is this a major story or is everyone just shrugging it off (though pissed about the price tag)?

(Thanks to everyone for the links!)

September 16, 2010
American Atheists Has a New President-Elect
Next Post

September 17, 2010 Bill Maher on Koran Burning and the Mosque
Browse Our Archives
What Are Your Thoughts?leave a comment