The Tea Party Movement Is Not Secular 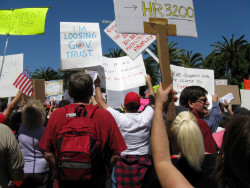 I used to think that the Tea Party movement was predominantly libertarian — that they were against taxes and spending and wanted the government to get out of… well, everything. Not my political leanings, but at least it was secular, I thought. It wasn’t about religion.

But I was wrong. Whoo boy, was I ever. If you’re a political junkie like I am, you might have heard that something strange happened in the GOP Delaware primary. The fringe candidate Christine O’Donnell, backed by the tea party and Sarah Palin, went on to win party’s nomination. And people are digging up things she’s said which have made a (bigger) cynic of me.

Not only does she believe that evolution is “just a theory” but she made the brazen claim that there’s “just as much, if not more, evidence supporting” six-day creationism. She advocated teaching creationism in schools alongside evolution because otherwise it violates the Constitution by favoring “secular humanism.” She argued that condom distribution helps spread AIDS.

And, of course, there’s the whole “anti-masturbation” organization she founded and she pushed which has gotten some attention from Rachel Maddow:

I’ll leave it to Jen McCreight to *ahem* handle that one.

*Whew.* In finding all the links and reading the stories for this post, I was overcome by the familiar blend of horror, amusement, fascination, and cynicism that comes from following politics in America.  A bit of time off (and a beer) helped me press onward.

I should point out that a lot of these positions come from years ago and it’s possible she retracted some or all of this dangerous, anti-scientific, overly-religious nonsense. But I can’t find any official statements on the issues, and her website is currently blank (apart from the option to donate).

O’Donnell isn’t the only one. I’m also struck by Sharron Angle, the Tea-Party-supported candidate who won the GOP nomination in Nevada. Angle accused her opponent of — get this — violating the First Commandment by setting up government as a God.

“And these programs that you mentioned — that Obama has going with Reid and Pelosi pushing them forward — are all entitlement programs built to make government our God. And that’s really what’s happening in this country is a violation of the First Commandment. We have become a country entrenched in idolatry, and that idolatry is the dependency upon our government. We’re supposed to depend upon God for our protection and our provision and for our daily bread, not for our government.”

No, it doesn’t make any sense to me either. But then, neither did her campaign against a local school’s choice of black jerseys because black is an evil color and invokes the devil.  Yes, really.  By the way, she won that fight – the school buckled and didn’t let the team wear the “satanic” jerseys.

Or there’s the line in an interview when, talking about the campaign, she said: “I need warriors to stand beside me. You know, this is a war of ideology, a war of thoughts and of faith,” leading the Washington Post’s Greg Sargent to ask: “Is it a stretch to conclude that Angle genuinely views the Nevada Senate race as a Holy War?”

Adele Stan of AlterNet adds another piece of the puzzle:

[Covering him in 1995], Ralph Reed was the Christian Coalition’s executive director. Today, he heads the Tea Party movement’s get-out-the-vote operation through his new Faith and Freedom Coalition, which he said that God, speaking through Sean Hannity, urged him to create.

Stan finishes by asking: “So, do we still think the Tea Party movement is a secular uprising?”

(Big hat tip to two of my favorite writers: Sarah Posner, whose article on Religion Dispatches inspired this post, and Steve Benen, whose post at the Washington Monthly was the source of many links.)

September 16, 2010
Announcing the Secular Coalition for Arizona
Next Post

September 16, 2010 Ask Richard: Atheist in the Philippines Lonely for Freethinking Friends
Browse Our Archives
What Are Your Thoughts?leave a comment