The Artist Formerly Known as Molly Norris drew this cartoon after the South Park/Muhammad debacle: 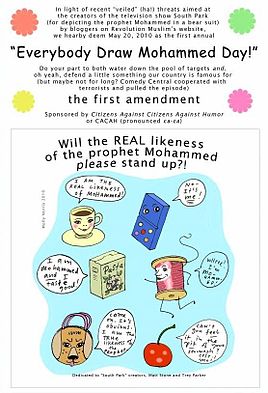 It led to an actual event where people drew images of Muhammad — offensive and not — on their Facebook profiles, on college campuses, on blogs, and everywhere else.

Norris regretted her cartoon not long after:

Norris, a Seattle cartoonist, says she’s been thoroughly stressed out ever since her April proclamation.

“It’s been horrible,” says Norris, who says she’s lost seven pounds because of stress, to Guzman. “I’m just trying to breathe and get through it.”

Norris was publicly ordered to be executed:

The Yemeni-American cleric Anwar al-Awlaki — the radical who’s also been cited as inspiring the Fort Hood, Tex., massacre and the plot by two New Jersey men to kill U.S. soldiers — singled out artist Molly Norris as a “prime target,” saying her “proper abode is Hellfire.”

And now, months after the event occurred?

Norris is in hiding so she won’t get killed.

The gifted artist is alive and well, thankfully. But on the insistence of top security specialists at the FBI, she is, as they put it, “going ghost”: moving, changing her name, and essentially wiping away her identity. She will no longer be publishing cartoons in our paper or in City Arts magazine, where she has been a regular contributor. She is, in effect, being put into a witness-protection program—except, as she notes, without the government picking up the tab.

What Norris did was courageous. It made a point that needed to be made: No one should infringe upon your right to free speech, especially your right to criticize religious beliefs. And after seeing the ridiculous response DMD invoked, I’m prouder than ever that so many atheists took part in the event. There’s a difference between disrespecting Muslims and disrespecting their beliefs. Muslims deserve respect. Their beliefs don’t.

Xeni Jardin at Boing Boing has a fairly lax stance on all of this, putting some of the blame on Norris’ cartoon.

You gotta put this in context. There’s also this little thing called a war going on. Iraq. Afghanistan. Koran burning or Mohammed-mocking are seen by some as a symbol for the occupation and military offense taking place within their countries’ boundaries, against their will. In context, while no one among us condones this sort of thing, or wishes to excuse it away — one can begin to understand why the fringe reactions are so extreme.

I’m of the opinion that pissing on a symbol for what someone else holds as sacred generally proves you to be a douche, or a provocateur who’s in it for attention.

But you have to know what you’re getting into, when you take a provocative stance on what is a really, really inflammatory topic right now, in the middle of two wars that are characterized — by the guy who started ’em! — as a sort of holy crusade.

“Pissing on a symbol” isn’t always a bad thing. And the people who do it aren’t always douches. When people start taking symbols as seriously as the actual thing it represents, irrationality blossoms.

Norris deserves absolutely none of the blame for what she did.

How much blame does Islam itself deserve? That’s debatable. Sure, it’s the radicals who are responsible for fatwas, terrorist attacks, and other threats. But their faith gives them all the cover they need to make their actions “justifiable” in their own eyes.

Some people might relate this to the recent Koran-Burning controversy. Let’s say Terry Jones went through with it. Should he have been subject to attacks/violence? Absolutely not. Again, you don’t have to like what he did. But he was going after an idea and not the people holding the idea. The only reason the story blew up is because he had the title of “pastor.” That only amplified his own nuttiness and made him more newsworthy.

Jen McCreight has a good response to all of this:

Now, I don’t go out looking to start confrontations, so I’m polite to an extent. If my Jewish friend is coming over for dinner, I’ll take their dietary needs into consideration. But the second Jews start threatening and murdering human beings for eating pork, I will not blink an eye before organizing a national Bacon Week.

I’ve never eaten bacon in my life, but if that happened and Jen organized National Bacon Week, I’d be first in line to take a bite.

September 16, 2010
Burka and Niqab Banned in France
Next Post