American Atheists Has a New President-Elect

David Silverman has been tapped to become the next president of American Atheists. 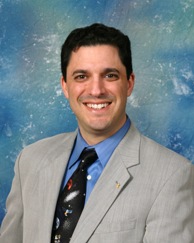 It couldn’t have happened to a nicer guy or a better spokesperson for atheism. Having worked with him in the past (and working with him now on a project I’m very excited about), I’m thrilled about the news.

Silverman has been with the organization since 1996, holding positions of NJ State Director, Communications Director and Vice President. He hosts the Atheist Viewpoint TV program, blogs on the NoGodBlog, has appeared on numerous public affairs and news programs, and debated religious apologists across the country.

Silverman noted that he is the first president of the organization who never met Madalyn O’Hair, founder of American Atheists and a plaintiff in the historic Supreme Court case to remove prayer and bible recitation from public schools. “I’m committed to remembering and honoring the important principals Madalyn represented. We’re re-committing American Atheists to a more visible role for nonbelievers in the fight for state-church separation and public policy.”

Dave begins the job next week, taking over for the previous president, Ed Buckner.

September 17, 2010 Just Say Nope to the Pope
Browse Our Archives
What Are Your Thoughts?leave a comment