An Atheist Protects a Chaplain in the Navy September 11, 2010 Guest Contributor

An Atheist Protects a Chaplain in the Navy

***Update***: I posted this earlier with incorrect information. Now that I’ve had a chance to fix it, I’m reposting it with the old comments still intact. Sorry for any confusion!

“He trusts God to keep him safe,” says RP2 Chute. “And I’m here just in case that doesn’t work out.”

[Chute] rose to the rank of RP2, the equivalent of an Army sergeant, and worked with three other chaplains before he was paired with Lt. Moran late last year.

Soon after they were assigned to work together, they had the inevitable discussion about RP2 Chute’s beliefs.

At first the chaplain got the sense RP2 Chute was agnostic. “I can work with that,” Lt. Moran recalls thinking.

But a few days later RP2 Chute dropped the A bomb: He was an atheist.

They work together but it doesn’t mean they have to agree:

Lt. Moran told Bible stories about angels, but met with silence when he asked the Marines to relate their favorite angel stories. “Even now, where we are, I believe there are angels present,” he said.

RP2 Chute looked on, his impassiveness masking his disdain for talk of angels. “It’s frustrating to listen to him tell people things I know not to be true, but I know it’s not my place to get involved when people come to him for help,” he said later.

There are times, however, when RP2 Chute feels he has to intervene and looses his own ample arsenal of biblical references, dredged up from his Baptist boyhood and doubting teenage years.

I’m glad the article portrays Chute in a positive light — then again, why wouldn’t it? He’s providing an important service.

As I read the article, I was disappointed that the issue of chaplain demographics never came up.

When the Military Association of Atheists and Freethinkers did their own research last year, the demographics for military chaplains didn’t show much diversity… 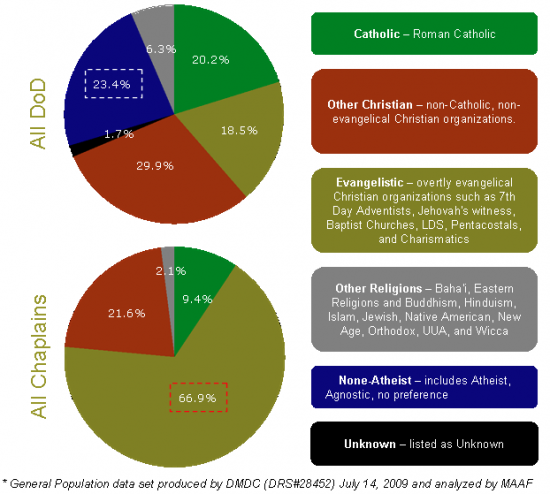 Considering all the atheists who serve in foxholes, there’s really no one to cater to them specifically.

(Thanks to everyone for the link!)

September 11, 2010
This is Why You Can’t Trust Blog-Analyzing Websites
Next Post