My Weekend at Dragon*Con

(Hemant’s note: This is a guest post by JulietEcho. She has been the fantastic admin for the Friendly Atheist forums for over two and a half years!)

Over the past weekend, I attended Dragon*Con in Atlanta, along with over 30,000 other sci-fi and fantasy fans. Some came for the costumes, some came for the parties, some came for the gaming — but I was there to see some of my favorite skeptics and sci-fi actors! Unlike TAM, the “Skeptrack” at Dragon*Con was only one of thirty-five different tracks available to attendees, so it had to compete with some formidable events. Still, plenty of skeptics showed up for panels and talks given by guests such as James Randi, Margaret Downey, D.J. Grothe, Heidi Anderson, and Adam Savage. 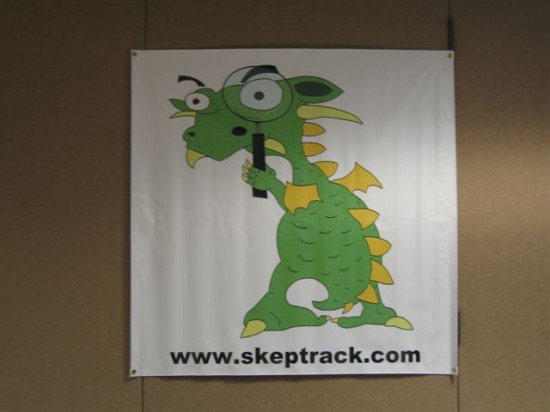 I was reminded during the “Skepticism and Sexuality” panel that we shouldn’t be hesitant to apply skepticism to a topic because it’s taboo or sensitive. Many skeptics have learned this lesson regarding religion — something that can be a very sensitive subject, indeed — but that’s not the only area where skepticism can be controversial or unwelcome. Benjamin Radford addressed myths and studies about sex offenders, and some of the facts he cited really surprised me. For instance, “Megan’s Laws” have never been shown to be effective, and the offenders listed in such registries are (contrary to common knowledge) very unlikely to reoffend.

Heidi Anderson talked about how it’s necessary for those who work with sexual assault victims to be aware of basic information about what it means to be transgendered, transsexual, etc. Barbara Drescher cited some interesting new studies about teenagers and sex and also talked about some about correlations between religiosity, affiliation, and sex. She talked about how while differences in education don’t usually change the behavior of teenagers (they’ll basically have sex anyway), it changed how they felt about it. Instead of resulting in actual abstinence, abstinence-only education “grows guilty teenagers.” Myths about pornography, bisexuality, and other sex-related topics were also discussed.

I was motivated enough to get up for an 8:30 “Skeptical Coffee Talk” session (which notably provided no coffee for the speakers or the attendees!) where I was rewarded by some really great commentary on the connections between being a magician and being a skeptic. James Randi, D.J. Grothe, and Joe Nickell shared their experiences as magicians who became skeptics. One point that was made repeatedly was that scientists often live in “an honest world” where no one is trying to trick them, which leaves them occasionally vulnerable and unprepared when it comes to testing people with tricks up their sleeves. Magicians, on the other hand, know about preparing to detect cheating. If you know a trick, you can detect it.

Everyone on the panel (and the audience too, judging by the wild applause) said that they would love for someone to win the Million Dollar Challenge. An audience member asked each panelist what supernatural claim they’d most like to be true. Joe chose ghosts, as he said he would be comforted by the implications they give of consciousness surviving death. After joking that “spontaneous human combustion has always had a certain charm for me,” Randi said he’d most like to see intelligent alien life from beyond Earth. D.J. chose telepathy, agreeing with Joe that some indicator of mind/body dualism would be comforting, “even though there’s no evidence for it.” Randi’s response: “There’s lots and lots of evidence for it! It’s just all very bad evidence!”

I was surprised and amused to hear that some people have claimed that James Randi is a powerful psychic who puts out “negative vibrations” in order to trip up other psychics taking his test. He explained the extraordinary lengths he goes to in order to stay completely uninvolved in the testing process, which includes insisting on not being told when or where the tests would take place. Despite knowing how to perform tricks that fool people, many magicians, according to Randi, don’t understand the psychology behind why such tricks work. Magicians aren’t necessarily skeptics — they might really believe they have a gift. I was reminded of a video that both amused and depressed me, featuring a UK psychic who took the Million Dollar Challenge and seemed genuinely upset and disturbed that he kept failing tests.

I was fortunate enough to have my picture taken with James Randi afterwards, and he was extremely gracious and pleasant. He also gave me his autograph, addressing it to “[JulietEcho], the ‘Friendly Atheist’s’ friend.” We had our picture taken together too, and no, I don’t usually wear sackcloth and dirt on my face! I was dressed as Fred Burkle from the TV show Angel. 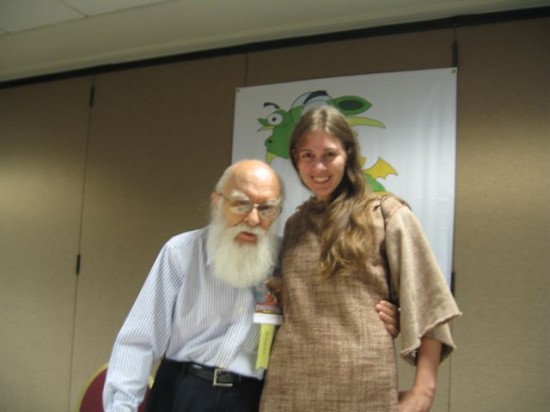 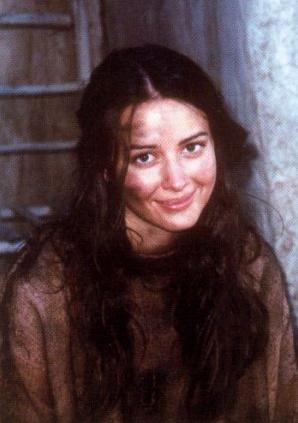 D.J. mentioned that he’d heard Richard Dawkins say that perhaps too much interest in fantasy (one of the two genres heavily represented at Dragon*Con) among kids could lead to credulity. He said that Dawkins should really come to Dragon*Con to understand the unique connection between many fantasy fans and the skeptical community. You can find many a skeptical geek if you look among fantasy fans. I got the impression throughout the weekend that most of the people around me were not religious, although there was certainly plenty of woo represented.

One of the highlights of my weekend was attending an event called “Spotlight on Adam Savage,” where he answered questions from the audience about Mythbusters, his personal hobbies, and miscellaneous topics. He started by whipping playing cards at the poor guy who was trying to introduce him. He explained that it’s a bad habit he picked up on the show, and he’s not allowed to do it around Jamie (heh). Whipping one out into the audience, he quipped, “I think I just hit a baby!” He talked about improving science education for kids by showing them the process of figuring something out, not just presenting findings. He also clarified that because they have to cut a lot of footage from Mythbusters episodes, many tests and experiments are performed but not aired on the show, due to mind-numbing repetition being a bit of a ratings killer. 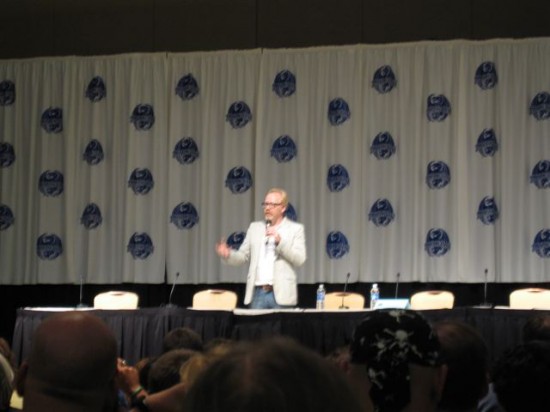 When asked about “Buster,” the dummy used to test hundreds of dangerous situations on the show, he said, “There’s actually a Church of Buster — he’s been resurrected so many times for your education!” When talking about the future of the show, Adam said another thing that I liked so much I transcribed it word-for-word:

“People still believe a lot of stupid crap. There’s still a ghost hunters show on Discovery! Wouldn’t you love it if you turned on the History Channel and they said, ‘Sorry about all those Nostradamus shows?’ I would love that world.”

In his spare time before Dragon*Con, Adam worked on a costume to wear on Sunday. I found out later that he’s done this sort of thing before, and sometimes the first person to figure out who he is wins a prize. We didn’t spot him, although I was suspicious of every masked and helmeted person I saw! If you want to see Adam in the costume he made, here’s the link to a photo a fellow attendee took.

For the Mythbusters fans out there: according to Adam, one of the upcoming episodes will feature a test of the circumstances involved in the famous Valkyrie operation that almost killed Hitler. Specifically, they’ll be testing whether it would have been successful if the same steps had been taken in the room where the targeted meeting was originally scheduled to take place.

The last official Skeptrack event I attended was a panel called “Women, Myths, Feminism and Skepticism” that included Melissa Kaercher, Desiree Schell, Brian Gregory, K.O. Myers, Donna Mugavero, and Barbara Drescher. Health care was a popular topic for discussion, as was the information (that keeps showing up in studies) that there are higher levels of belief in woo among women than men. Paganism was mentioned in particular as a set of supernatural beliefs that attracts many women because it’s female-centric and avoids many of the patriarchal stereotypes embodied by other religions.

An interesting discussion also cropped up concerning the big issue of “tone” from atheists. Assertive women are often painted as “bitches” and “harpies” if they take controversial or unpopular stances, and atheism is certainly a controversial stance among the general population. Yet I’ve seen female atheists pointed to as examples of “gentler” atheists, especially when contrasted with white men. See Greta Christina and Amanda Marcotte for excellent responses to that claim, in case you missed them the first time around.

Skeptrack also held a free vaccination clinic on-site, which was advertised all over the four sponsor hotels and provided pertussis (whooping cough) booster shots, which most people don’t realize they need.

All of this was really the tip of the Skeptrack iceberg, and I was sorry I couldn’t attend more of their events. But a girl has to make time to see the Deep Space Nine cast and the Futurama voice actors, right? Maybe next year we can arrange a meeting of Friendly Atheist readers who attend, or Hemant could even go as a guest (c’mon Hemant, you know you’d love it!) and rub elbows with Scott Bakula and Jewel Staite in the process. I heartily recommend it!

September 10, 2010 A Children’s Book for Atheists?
Browse Our Archives
What Are Your Thoughts?leave a comment