At the University of Georgia yesterday, the UGAtheists celebrated “Stone a Heathen Day,” using some Bible verses to generate some buzz about their group on campus.

The idea came from the Pastafarians at the University of South Carolina. As UGAtheists president Randall Bourquin said to me, “They dreamed it up, shared it with me, and will be executing their own day on Sept. 30th.”

Here are some pics from the awesome UGA event: 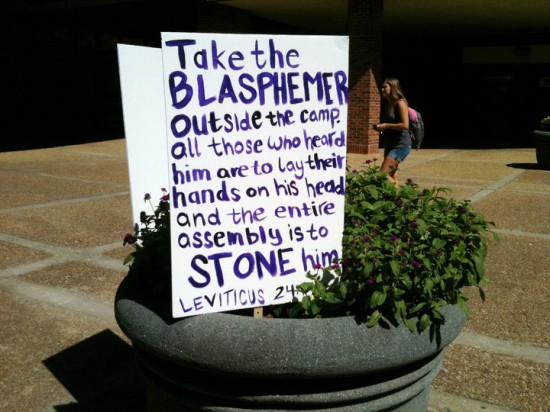 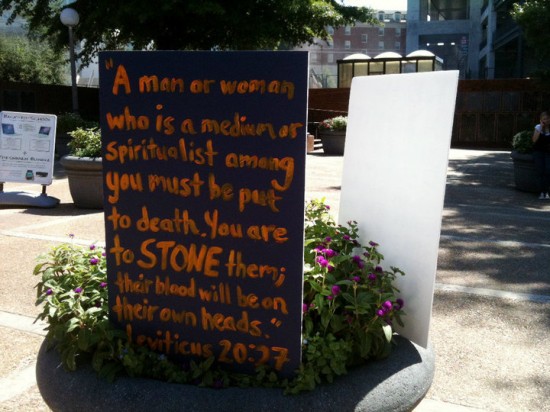 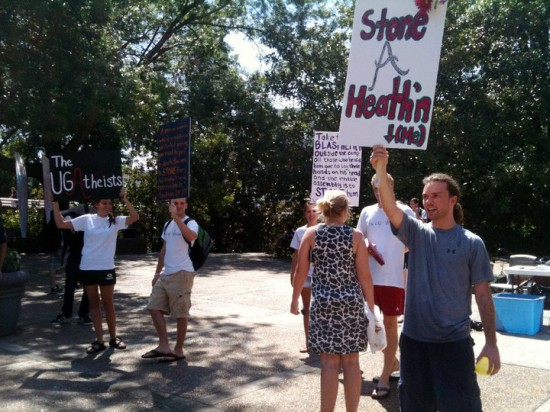 So, how exactly does one “stone” a heathen?

Bourquin and other atheist students encouraged people walking in Tate Plaza to stone them according to the Bible’s commands.

Leviticus 24:14, a command from God to Moses, reads: “Take the blasphemer outside the camp. All those who heard him are to lay their hands on his head, and the entire assembly is to stone him.”

The UGAtheists laughed at their own self-condemnation.

“Jesus said, ‘Let he who is without sin cast the first stone,’ but he said nothing about water balloons,” Bourquin said.

… Bourquin said one reason his group organized “Stone a Heathen Day” is because it is not easy to be an atheist in a community such as the one at the University.

“It’s pretty tough to extract sympathy from almost anyone,” he said. “It’s more or less socially unacceptable to come into a room and say, ‘I’m an atheist’ and get a pat on the back.”

What a great way to show some of the crazier stuff in the Bible. You shouldn’t take it seriously (or literally) here, so why should you take it any more seriously when it is used to justify bigotry and promote Creationism?

It clearly hit some nerves, too:

“They’re definitely poking fun at religion,” he said. “It doesn’t personally offend me, but they’re giving Christianity a bad name.”

Yes, it’s poking fun at religion. There’s nothing wrong with that. And if Christianity has a bad reputation, I’m pretty sure we can blame most of that on Christians themselves.

After one atheist student asked if Christian student James Wood would throw a water balloon at him, Wood declined.

“Behind that action I think is a sinful desire to get back at them,” said Wood, a senior from Marietta. “I don’t think Jesus would throw a balloon at them.”

Right. But Jesus would *totally* have banned gay marriage and voted for Sarah Palin.

One professor called out the atheists for using Old Testament cruelty:

“It’s not for amateurs to interpret the Bible,” he said.

Like that’s ever stopped anyone before. When Christians heed that lesson, I’m sure the atheists will follow suit 🙂

By the way, there’s a great picture of group member Daniel Brettschneider getting “stoned” in the UGA student newspaper. Check that out.

And look at the featured video on the paper’s website!

I love the beginning of the school year. All these creative atheists groups are out in full force, getting their message out, shaking up theistic sensibilities, and making me smile in the process.

September 2, 2010 Why Does Skepticism Matter?
Browse Our Archives
What Are Your Thoughts?leave a comment