The Penn State Atheist Agnostic Association decided to set up shop next to some campus preachers on Monday.

So while the Christians stood here… 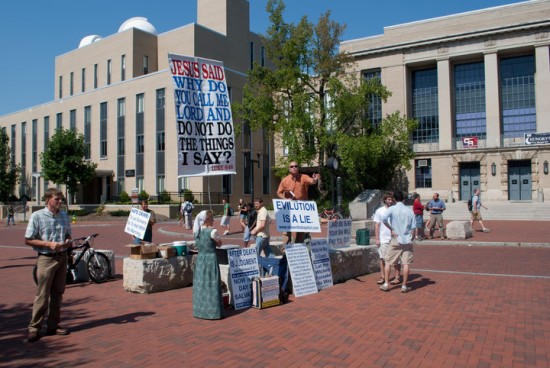 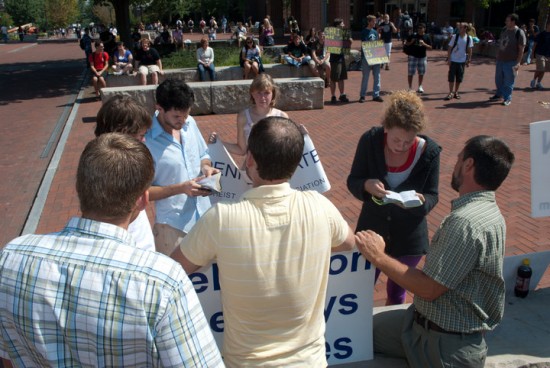 … with Biblical references of their own… 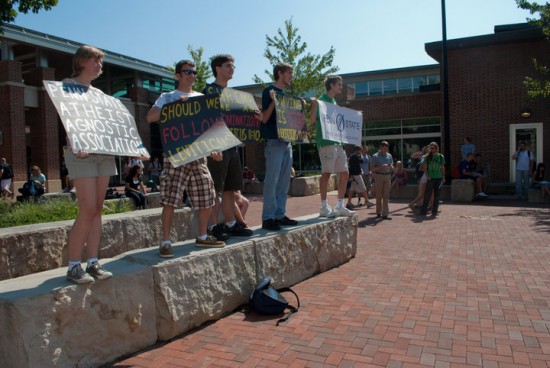 … and other entertaining signs… 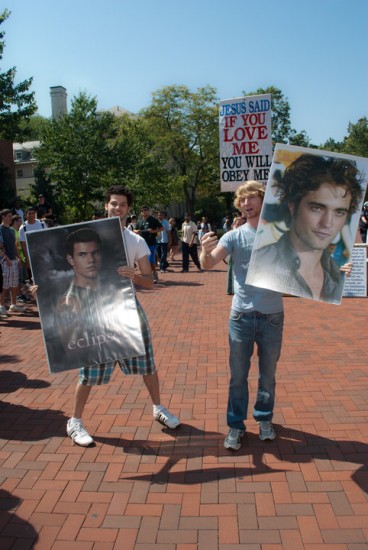 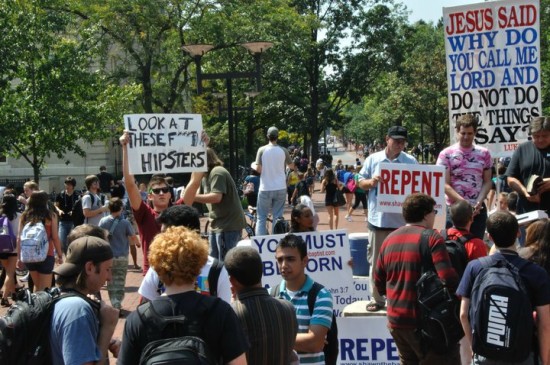 Looks like they blunted any damage the Christians would have done.

Clinton Leinbach, who traveled to campus from Selinsgrove, Pa., said he came to warn people about the dangers of not accepting Jesus.

Leinbach said he thought it was possible to convince the atheists — who were standing across from him in protest — to accept Jesus.

But Dan Farbowitz, a member of the Penn State Atheist Agnostic Association, didn’t seem to budge from his convictions.

He was cloaked in a brown, hooded robe — garb familiar to Jedi masters like Luke Skywalker and Yoda — and held a sign that read “Consider Jediism.”

It’s not like the campus preachers had much of a strategy, anyway. They just came to preach the hate and then acted shocked when they realized it wasn’t working:

After preacher Shawn Holes told the crowd that being gay is a sin, counter-protesters held up rainbow flags — a symbol for gay rights.

But Holes said they had taken his message the wrong way.

Too many jokes forming with that last line…

An article in the school paper says that the barrage of signs just caused more confusion than anything — I’m fine with that. Whatever gets the focus off the preachers. It also helped that the atheists weren’t the only ones with amusing signs:

Causing even more confusion was a group of students holding up signs with nonsensical phrases like “Words on a sign” and “My arms are tired from holding this sign.”

Nate Johnson (sophomore-aerospace engineering) said the signs were created to poke fun at both sides of the protest and weren’t really targeting anyone at all.

I’m loving these recent stands against campus preachers. There’s no need to get angry. We just need to be clever. Ridicule them with their own Bibles. Say something equally as absurd as whatever they’re saying. Play Bingo. Worship a boot. Use them to raise money for charity. It’s all better than letting them speak unchallenged.

(Pictures via Matt Becker (on Facebook) and reader Emily)