CFI Wants Ground Zero to be Free of All Religion August 29, 2010 Guest Contributor

CFI Wants Ground Zero to be Free of All Religion

The Center for Inquiry is opposing the building of Park51 — the (close to) Ground Zero Mosque (and Community Center). Their reasoning is rather interesting:

… it would be inappropriate to build any new house of worship in the area immediately around Ground Zero, not just mosques. “The 9/11 attacks were an example of faith-based terrorism, and any institution that privileges faith above reason is an affront to those who were killed and injured in those attacks,” observes Ronald A. Lindsay, president and CEO of CFI.

CFI fully supports the free exercise of religion; protecting the rights of believers and nonbelievers is central to CFI’s mission. Accordingly, CFI endorses President Obama’s recent statement reminding the country that Muslim Americans enjoy the same rights as other Americans and should not be treated as second-class citizens.

Faith will continue to harm and kill, whether it is in Oklahoma City or New York City, until people stop basing their conduct on imaginary divine commands and accept their responsibility to reason together. To honor those killed by faith fanatics, Ground Zero and its immediate vicinity should be kept free of any newly constructed house of worship — of any religion.

There’s a lot wrong with those paragraphs. To say that any religion whatsoever is an “affront” to the victims of 9/11 is grossly exaggerated. And it seems like a very fine line between supporting the free exercise of religion while opposing any house of worship being built in that region.

CFI says it’s inappropriate to build houses of worship “in the area immediately around Ground Zero.” So at what point is it appropriate? After a three block radius? A mile? Is there a difference between placing a church or mosque a few feet before or after that magical boundary line?

What about all the churches and synagogues already in the region? 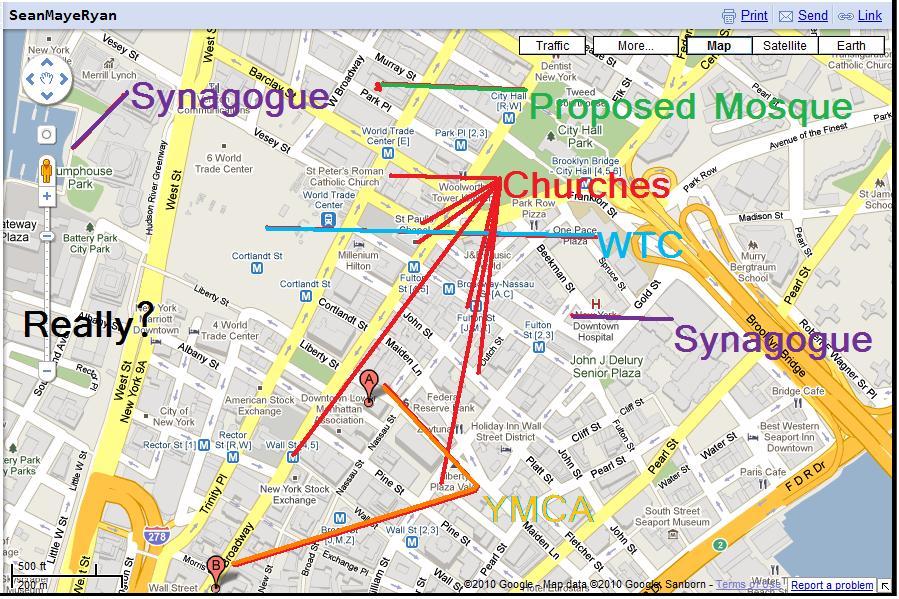 (Would a CFI office in that vicinity be ok? I wonder…)

What about areas in which Christian terrorists did something horrible? Would CFI support the right for a synagogue to be built anywhere near the area where Dr. George Tiller was killed by a Christian extremist?

CFI could’ve easily said they oppose religious thinking that places faith above reason without opposing Park51 in particular and leave it at that. They could’ve also could have done more to say they support the right of people to build religious houses, while still wishing none were built anywhere in the country.

But what was offered in the press release is confusing and makes it sound like CFI is going against its own values.

… This press release is bad enough to make me seriously reconsider whether I still wish to continue my membership in CFI or be affiliated with the national organization in any way. (I like the local organization and am sorry to see it tarred with this nonsense from the mothership.) I will wait until my anger resolves before making a decision. It may take some time, though, because this press release really did infuriate me, all the more so because it is a betrayal of the commitment to reason and critical thinking that CFI stands for. I joined CFI because I respected its commitment to critical thinking and promoting reason and secular values, admired its work, and wanted to be a part of it, even if only with financial support.

***Update***: It seems that CFI will soon be issuing a revised press release.

Further, CFI laments the effort by some to turn the proposed Islamic center into a political issue. Government officials and candidates for office should not intervene in disputes over the alleged offensiveness of a place of worship. Such conduct violates the spirit, if not the letter, of the Establishment Clause. Government officials should not be deciding who is a “moderate” Muslim any more than they should be deciding who is a “moderate” Christian or Jew.

A number of private individuals have protested the proposed Islamic center. The tone and substance of these protests covers a wide range. Some protesting the Islamic center have raised legitimate questions, but to the extent the objections to the Islamic center mistakenly equate all Muslims with Muslim extremists, CFI condemns them.

CFI maintains that an Islamic center, including a mosque, near Ground Zero, in and of itself, is no different than a church, temple, or synagogue. It is undeniable that the 9/11 terrorists were inspired by their understanding of Islam, and that currently there are far more Islamic terrorists in the world than terrorists of other faiths, but those facts are not relevant to the location of the Islamic center, absent evidence that terrorists are involved in this endeavor, and there is no such evidence.

CFI’s unequivocal support for the legal right of Muslims to place a community center near Ground Zero does not imply that CFI views the new center as an event to be celebrated. To the contrary, CFI is committed to the position that reason and science, not faith, are needed to address and resolve humanity’s problems. All religions share a fundamental flaw: they reflect a mistaken understanding of reality. On balance, CFI does not consider houses of worship to be beneficial to humanity, whether they are built at Ground Zero or elsewhere. [Hemant says: emphasis here is mine.]

This statement supersedes any prior statement issued by CFI regarding the Ground Zero controversy.

I think this is a far better statement than before. That said, I have no idea what the purpose of it is, other than to make amends for the confusing/harmful-to-itself release that was put out a couple days ago. That aside, what’s the point of it?

The same press release could just as easily been written like this:

We at CFI will not be celebrating the building of Park51.

Meanwhile, Pat Condell still seems over the top on the whole issue:

August 29, 2010 Strawbaby!
Browse Our Archives
What Are Your Thoughts?leave a comment