It’s so easy to make someone’s day better. I’m a big fan of Improv Everywhere, who stage elaborate public displays of randomness (their most famous event is probably the annual No-Pants Subway Ride). Apart from public spectacle, they have a knack to make onlookers smile and appreciate the brief detour from the mundane, expected, daily life. But I’ve never seen them do it in a more simple fashion than in The High Five Escalator.

One of their agents stood at the top of a long escalator at a subway transfer in the morning rush-hour and gave high-fives. There were other agents with signs alerting people to the impending possibility of high-fives, but that really is all it took to make people’s day. Check out the video they took:

Everyone is generally in a pretty crappy mood when they’re making this transfer with a herd of other people at the crack of dawn. It was definitely a location in need of a bit of fun.
…
It was awesome watching the reactions of people before, during, and after the high fives. I’d say around 75% of the riders gave Rob a high five. There were some people who were both listening to music and reading a book who didn’t look up to notice what was going on. A small percentage seemed suspicious of us and elected to keep their hands to themselves. Most people smiled and high fived. Some people kept a straight face during the high five, but then privately smiled to themselves a few moments later. Watching people after they gave a high five was almost more fun. Almost everyone was left with a smile. 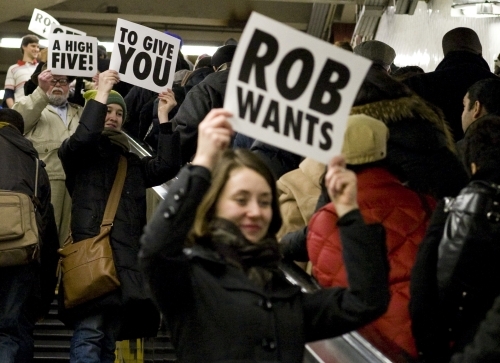 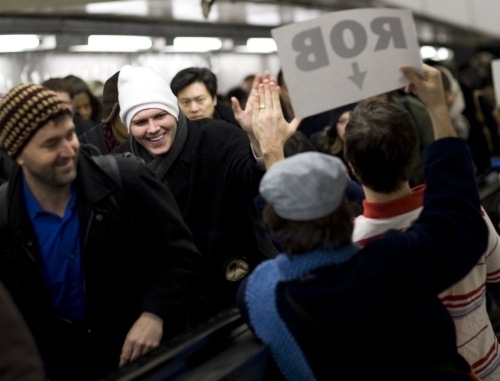 Heck, that made me feel good just watching.

I think what makes it so powerful is how unexpected it is. The shock of friendliness and enthusiasm went a long way. We need more Spontaneous Acts of Good Will!