A Response to the Kentucky Atheist Billboard August 26, 2010 Guest Contributor

A Response to the Kentucky Atheist Billboard

A few weeks ago, the Louisville Coalition of Reason put up an atheist billboard in Kentucky.

Why is it a useful, needed ad? Because in the South, people don’t always know that atheists exist. A sign like this can function as a welcoming message for other non-theists, directing them to a website listing various local freethought groups.

Louisville Bible College is now responding with an ad of their own — less than a mile away from the atheists’ billboard. 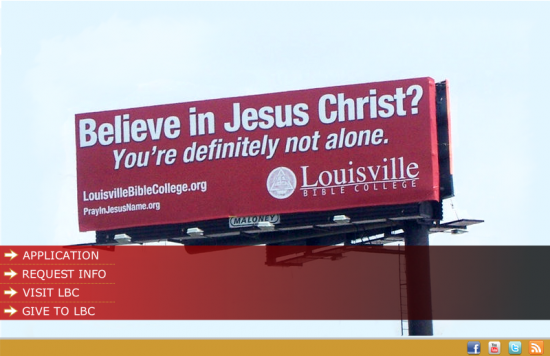 Talk about missing the point… as if anyone needed that reminder?

No Christian driving past that billboard is looking up and saying, “There are CHRISTIANS around me?! I never knew!”

It’s a waste of money, but at least it’s their money.

I can’t wait to see the next billboard in Kentucky: “Are you white? So are we!”

While we’re talking about the state, the Kentucky Secular Society got some nice press just for manning a booth at the State Fair!

The booth, located in the South Wing of the Kentucky Exposition Center, was adorned with busts of famous atheists, deists and other “freethinkers” who rejected belief in a God that reveals guidance to humans or is involved in human events. It also included posters and a video slideshow of such people, along with some of their quotations against religion. They included evolution pioneer Charles Darwin, author Mark Twain, founding fathers Thomas Jefferson and Thomas Paine and women’s rights pioneers Elizabeth Cady Stanton and Susan B. Anthony.

Observers of the booth said they found it intriguing.

“It certainly has got a lot of people talking about their faith,” Linda Scherer said after greeting those at the booth. “That’s a good thing. Know why you believe what you believe.”

I love when the media covers atheists for just “being there.” But a positive presence is always helpful to get our message out.

(Thanks to Laura for the link!)

August 26, 2010 Ask Richard: Atheist Sister Wants to Help Her Younger Brother in India
Browse Our Archives
What Are Your Thoughts?leave a comment