Ask Richard: Atheist Haunted by the Fear of Death

I have been an Atheist for most if not all of my life. My little sister is one, my mother is probably one, and my father, if religious, has never said a word to me about religion. I grew up in a secular humanist Jewish community, too. The idea of a ‘god’ just never made sense to me and I don’t think I could believe even if I wanted to.

But here is my problem. I am afraid of dying. I am so afraid of dying that if I think about what it would mean, even for a second, I become fixated on the thought and have a panic attack where I reach the point of almost passing out. It only happens every once in a while, and I am a fully functioning person, but if I do think about it I can’t function.

Religion, I understand, is a fix for people with a similar fear. They do not have to fear death because death for them is not the end all be all. I try and calm myself by telling myself that if I make a difference in the world my contribution will outlast me, but then I think of the nothingness and my heart starts to beat a mile a minute. It is at those times that I wish I was not a realistic person, that I had grown up with a love for a god and a belief that I would live on in eternal happiness. Deep down I wish I could believe in a god, just to make the fear go away.

My question is this. My fear has never gotten in the way of living normally, but I hate it. I thought about therapy, but therapy would mean confronting it and I don’t think I could, because what’s the end result? Either I fool myself into thinking that there is paradise or another life waiting for me or I keep this knowledge hidden from myself, always waiting to reemerge as Ive been trying to do all of my life.

Am I alone in this fear? Should I seek help? What is a godless person who afraid of death and is incapable of believing in a god supposed to do? I know it’s a big question, and you certainly don’t have all the answers, but I just want the pain to go away. Not suicide of course. Don’t worry about that. That would be like having a crippling fear of dogs so you go out to buy a viscous dog. I’m afraid, not irrational.

Firstly, your letter is very courageous. Courage is not the absence of fear. It is doing what must be done in spite of your fear.

You’re right, I don’t have all the answers, and I don’t think there are any standard “atheist” ways of dealing with this, so please forgive me for drawing heavily upon my own personal experience.

The first time I deeply realized my own annihilation I was about 17 years old. The thought of the ending of my consciousness just popped up and really got my visceral attention. I felt like ice water was creeping up the back of my neck, my stomach felt upside down, and my heart was pounding. I sat back and took some deep, slow breaths, and I talked to myself. I reminded myself that I was young, healthy and not in danger. I also thought about how this is a natural instinct that helps all animals to survive. They run faster or fight harder. It’s just that humans know hypothetically ahead of time rather than just when predators are approaching. After a short time the sensations went away, but I remembered the experience.

The vague, maybe-I-guess-so beliefs in an afterlife I had at the time were not of any comfort, and I doubt that even a strong faith would have softened it much, because this was a very primal, very organic experience. It was a reflex, a built-in instinct, as automatic as blinking when someone pokes their fingers toward my eyes, and as independent of intellect as pulling my hand off the stove before the sensation of heat reaches my brain.

Time passed, and on rare occasions that triple sensation would bubble up, but I quickly distracted myself with some of the things you have probably done, such as thinking about something else or getting really busy. It was a strategy of evasion, but the feeling was becoming more familiar, and it was finding me more often.

Then when I was about 23, it came on me again in the middle of the night while I was lying in bed. I felt the same three sensations: Ice water up the back of my neck, my stomach upside down, and my heart pounding. There was nothing likely that would cause my death that night, but the conviction of imminent mortal threat was still very powerful. In a completely irrational way, I was convinced that if I did not somehow escape, I would die then and there.

But this time something in me changed. I was sick of running. I was sick of hiding. I thought okay, come on. Bring it on. Whatever this is, I’d rather get it over. I turned and faced it. 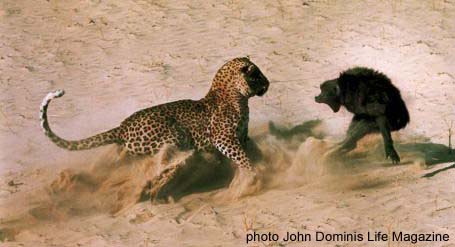 For the next few minutes those three sensations built and built, stronger than I had ever felt before, but I just lay there and felt them vividly. Then they crested and broke like a wave, and quickly faded away. I was still there, looking up at the dark ceiling.

I realized that it had been nothing more than those three sensations. Any more “meaning” to it was merely my own commentary, my labeling it with a scary significance. It no longer intimidated me, and it eventually stopped coming around.

Since then I have had four close calls where I actually would have died. A faulty wire nearly electrocuted me, a machine part flew just past my ear like a bullet, a speeding car missed me by six inches as I walked across the street, and if the 1994 Northridge earthquake had occurred just a few hours later, I would have been crushed in this building: 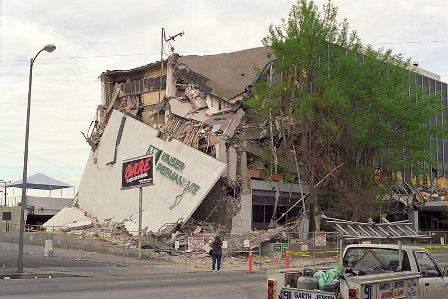 Each of those has left me with a stronger sensation of windfall, of having an extra chance, and a stronger interest in staying positive. Life is just too short and too subject to randomness for me to waste even a moment on a crappy mood, or an attitude of resentment, or focusing on what I don’t have. Screw that. There are so many opportunities for me to enjoy giving, encouraging, celebrating, and loving, and I’m not going to pass up a single one. Each of those close calls has added to my attitude that my life now is all gravy, it’s all extra. I get to go around on the ride again for free.

And now I’ve been riding for 60 years. My body is beginning to show a little wear and tear, and statistically my time is shortening.

My legacy is already complete. My life is already filled with meaning. I’ve made a positive difference by being here, and I’m looking forward to making even more. In one of my careers I’ve had the amazing privilege of actually saving lives. If it’s over today, that’s fine, or another 60 years from now, as long as I can keep making some kind of positive difference, even little ones.

I’m not trying to portray myself as heroic. My healthy, natural fear of death keeps me interested in simple safety. I make sure that wires are unplugged when I handle them, and I look both ways when I cross the street. But that’s about as far as it goes. I concentrate on life.

Anne, you have described what would probably be called anxiety attacks or panic attacks. Any number of things can trigger them in people. Your trigger happens to be the thought of your mortality. Trying to always avoid the thought means you’re actually always thinking about it in the periphery of your mind.

I think your predicament can be readily helped by working with a competent secular counselor who will neither offer you religious hocus pocus, nor other futile ways to distract yourself. A good counselor will stay by your side as you walk all the way through your Valley of Shadow. He or she will teach you to breathe deeply and slowly, and help you to turn and face your fear, completely experience it, realize that you have survived it, and no longer be intimidated by it. You will have seen that it is nothing but a couple of thoughts and a few bodily sensations. Meh.

As you get older, I think that the positive differences that you make in the world by your contribution will become a much stronger compensation, comfort and satisfaction for you. Rather than hiding from death, you will be spending your days embracing life.

You may send your questions for Richard to

August 23, 2010
My Talk at the 2010 Secular Student Alliance Conference
Next Post