My Day at a Casey Luskin Lecture August 19, 2010 Guest Contributor

My Day at a Casey Luskin Lecture

This is a guest post by Jamie Bernstein. Jamie is a graduate student in public policy at the University of Chicago. She previously posted about her day at an anti-vaccination rally.

Matt Lowry is referenced in the posting and you can read his take on the event here.

When I found out Casey Luskin was going to be giving a talk in Chicago, I knew I had to go. He works for the Discovery Institute and is a well-known proponent of Intelligent Design. Luckily a friend of mine, Matt Lowry, was going as well so I didn’t have to be there all awkwardly by myself.

The event was held in a small room at the University Club in Chicago. Matt and I grabbed some food from the buffet table and picked out a spot near the back. We began eating immediately, wanting to make sure we finished our food before Luskin’s talk started so it wouldn’t interfere with our laptops and notetaking. When we were half-finished with our meal, a woman took the mic and announced that it was time for the prayer. That’s when I looked around and realized that no one else had touched his/her food. Oops…

The other people at our table all seemed to already know each other, so Matt and I ate and talked amongst ourselves until the lecture began. We both set up our laptops and realized that they were each covered in stickers from Skeptical-type organizations, but kind of just hoped no one would notice. From what I counted, there were 29 people in the room, including Luskin, Matt, and myself. It was a small, intimate setting for what I hoped would be an interesting talk. 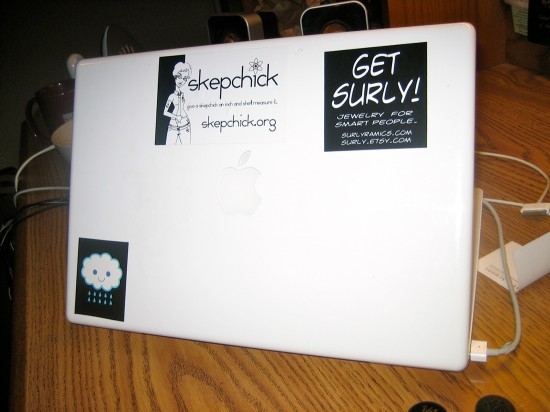 The title of Luskin’s lecture was “Intelligent Design: Dead Science or the Future of Biology?” My first thoughts were “Are those the only options?” and “Why the assumption that it’s science in the first place?” and “Wow, he’s kind of good looking.” [Editor’s note: Hemant shakes his head at Jamie.]

One of the first slides contained the following definition of ID:

“Many features of nature are best explained by an intelligent cause because in our experience, intelligence is the cause of their informational properties.”

He then put up a slide showing the scientific method and talked about the importance of positive arguments. In other words, he warned that disproving evolution does not prove ID. He added that although many people may have opinions on who the designer may be, it is beyond the realm of science. Science can only tell us if there is a designer, not whether it’s the Christian God, intelligent alien beings, or any other form of intelligence.

At this point I was still eager to hear what he had to say. I’ve heard many of the arguments for ID already, but I hoped this focus on science might bring in some new ideas.

At this point, I was just thinking “Get to the science part already!” He had promised to show us that ID can pass the scientific method, but so far there hadn’t been much. He proceeded with more analogies: mountain vs Mt. Rushmore, random poker game vs. a stacked deck, etc. The list seemed endless.

I found this “natural vs. designed” argument interesting because assuming a Christian Creationism, everything was designed by God, so there is nothing to discriminate between what’s designed and what’s natural. Luskin seemed to be implying that some things in our world are “natural” while others are “designed.” This is a duality I haven’t heard before in ID arguments.

Luskin was now ready to get to the science. He first introduced the concept of Complex and Specified Information (CSI), saying that this is what we are testing for when we are testing for ID. High CSI means design was likely involved, and low CSI implies a natural origin.

He started with Michael Behe and the concept of irreducible complexity by studying flagellum. My heart sank a little when I saw that this was going to be the first bout of evidence. This is an old ID argument that has been countered time and time again.

I left briefly to go to the bathroom, and when I came back he was talking about how amino acid sequences are extremely rare, and therefore must have high CSI. He also said that computer simulations show that not much CSI can be produced by Darwinian processes on evolutionary timescales.

At this point I was seriously confused. What exactly was CSI? How is it measured? What constitutes high CSI and what constitutes low? It seemed to me that it was just a general term used when something appeared designed. In other words, if something seemed designed it was declared to have high CSI and if it seemed natural it was declared to have low CSI.

The rest of the “science” portion of his talk never answered these questions. It seemed to just be a recitation of all the old ID arguments, like junk DNA having a purpose and DNA acting like computer code. If I was hoping for something new, I was sorely disappointed.

The end of his talk focused on academic freedom, and he briefly went through some cases of professors or researchers being discriminated against for studying ID. Most cases contained no names, just general references like “a professor at Ohio State” or “a person on a blog in Toronto.” He quoted random things that unnamed people said on their unnamed blogs that were against ID proponents. (Actually, he didn’t quote so much as paraphrase, so it’s not even exactly clear what was said.) This whole portion of the talk seemed like it had just been thrown onto the end. Luskin had not spent much time putting this section together, and it showed.

Finally it was time for the question & answer period.

The first question came from a man asking Luskin to refute the arguments from biologists like Dawkins and Gould against flagellum being an example of irreducible complexity. (Good question, random audience member!) It was exactly what I would have asked had I gotten my hand up quickly enough.

Luskin responded by turning back to analogies (Is a laptop cable not intelligently designed if you can use it to power a toaster?)… He did mention that a portion of the flagellum could be used to inject poisons, but for some reason I didn’t quite catch, he said that this was also an example of ID.

This is when Matt chimed in with a question. He pointed out that Luskin had claimed that irreducible complexity was evidence of ID, but then admitted that the flagellum could be reduced and that this was also evidence of ID. What gives?

This caught Luskin off guard and he claimed that he never said that, but Matt stuck to it and kept urging him to answer. Luskin then talked about step-wise evolution, and that some things, like the concavity of the eye, could be useful to the organism every “step” through the evolutionary process. Therefore, he said, this was not evidence of irreducible complexity or ID. This didn’t really answer the question, but Matt dropped it and Luskin moved on.

When it was my turn to ask a question, I asked: “In order to have a good hypothesis, it has to be possible in theory for it to be disproven. What then would be evidence that, if found, would disprove the theory of Intelligent Design?”

Luskin responded that if we find a structure that has no purpose, then it could not have been intelligently designed. This seemed to be a reference to the section of his talk regarding junk DNA. He had said that for years scientists believed that junk DNA served no purpose, but recently we have found that much of it is important, though we are just beginning to understand its function. He believed this vindicated ID because a structure would not be designed without a purpose. Regarding an earlier time when we believed that junk DNA was useless, he had said that just because we don’t know somethings purpose doesn’t mean it doesn’t have one.

In other words, he basically admitted that ID is unfalsifiable! This was exactly the point I was trying to get at with my question.

Matt was then called on for a second question. He asked Luskin about the Wedge Document and quoted lines from it that seemed to contradict what Luskin had been saying earlier about ID having nothing to do with religion. Luskin answered by trying to distance himself (mentioning he was just an undergrad at the time) and generally evading the question by saying that scientists with an atheist agenda pushing evolution don’t mean that the theory of evolution is an atheist theory. This led to an exchange between Luskin and Matt over the Wedge Document and the Dover trial, in which the entire audience was perked up and interested and gasping at various points. This was the only point during the lecture where Luskin seemed out of his element. He went on the defensive, his voice rising, and the bitterness clearly evident when he would mention names like Eugenie Scott or Judge Jones.

The talk ended soon after and Luskin quickly came over to Matt and me to thank us for our questions and shake our hands. He said he really appreciated us being there and asking him difficult questions that challenged his conclusions. He agreed to a picture with Matt and was generally quite nice about the whole thing.

As Matt and I were leaving, a couple other people came up to thank us for coming as well. It was obvious that we were not ID proponents and Matt had clearly shaken things up a bit, but everyone seemed genuinely glad that we had come. Some people even said that they had agreed with some of our points where they felt Luskin’s argument was weak and were glad that we had challenged him on it.

Overall, I don’t feel like I got any good evidence for ID, and mostly heard rehashings of the same, old ID arguments. Much of the information in the talk was inconsistent or contradictory. When these issues were pointed out in the Q&A, I didn’t feel his responses were satisfactory. Even so, it was presented well. Casey Luskin was an engaging, articulate speaker, and I found myself interested in everything he was saying, even if I found the content lacking. Nothing in his talk changed my mind regarding Intelligent Design.

But you can’t say I didn’t give it a fair hearing.

August 18, 2010
How You Can Help the Secular Student Alliance
Next Post