Too Soon To Learn About Santa Claus? August 3, 2010 Guest Contributor

Too Soon To Learn About Santa Claus?

Two days in a row dealing with one-year-old babies. Hmm….

Reader Jay and his friend are both atheists. The friend’s daughter is turning 1 and he plans to eventually teach his daughter to be skeptical of the world around her and to “not have religion blinders on” as she grows up.

Sounds like a plan, right? Jay approves and he has decided to give her a head start: 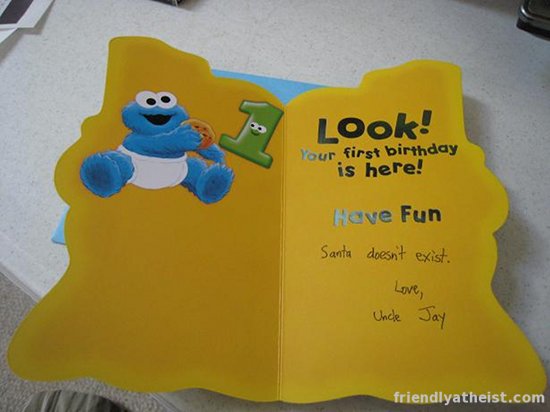 It raises a good question, though: Are you taking away a child’s joy if you tell them the truth about Santa Claus at an early age?

No doubt kids will eventually either figure it out for themselves or find out the truth from a friend, but that’s assuming they’d heard and believed the myth at some point.

For what it’s worth, variants of this question have been asked here a couple different times in the past.

(Thanks to Jay for the image!)