Note to Wichita: There’s No Prayer at City Council Meetings

Vickie Sandell Stangl, the president of the Great Plains (Kansas) Chapter of Americans United for Separation of Church and State, gave a godless invocation before a meeting of the Wichita City Council recently.

Believe it or not, some council members weren’t happy about it…

Council member Sue Schlapp later blessed the meeting since the invocation didn’t. And people who oppose prayers during city business meetings and council members debated the issue during the public comment period a few minutes later.

“We do open the invocation up to all,” Council member Lavonta Williams said. “I don’t think it’s just for us that we’re asking for in the prayers. I think that we’re asking that this day be blessed as well. I for one would like to continue to be blessed before our meeting.”

Council member Paul Gray said all societies have religion and that it has a place in public life. As he spoke, Sandell Stangl approached the podium to respond. Gray preempted that, saying: “And, ma’am, this is not an open debate.”

Gray’s right: It’s not an open debate. It’s settled law. There can be no government endorsement of religion.

It’s a tough order to vote them all out of office, but in the meantime, The Wichita Eagle has a poll for you to crash. And since PZ is on strike, we should take charge: 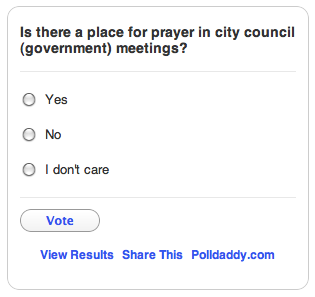 As I write this, the Yes and No votes are virtually the same.