A number of city councils are heading for disaster.

I swear, all these problems would stop if local mayors just did away with pre-meeting prayers… but they won’t. They get off on pushing their personal faith.

It’s one thing when only atheists oppose them. But when you have a minister against them, shouldn’t that be a sign you’re doing something wrong?

Their prayers have gotten out of control:

Prayer in the public square has been under increased scrutiny since March, when Councilman O’Neal Mintz — filling in for Chaplain Jerry Clevenger — opened a council meeting with a prayer condemning abortion and same-sex marriage. Clevenger, a Sheriff’s Office employee, typically gives the opening prayer and uses less controversial language. But he does close his prayers “in Jesus’s name.”

See? Inclusive of everyone. Except Hindus, Muslims, atheists, Jews… but, really, who cares about them in Spartanburg.

Don Rollins is a minister at the Unitarian Universalist Church of Spartanburg and he wants to put a stop to all this.

In May, he formally asked council to reconsider its policy on prayer — “to signal to persons outside the dominant religious paradigm that they are welcome at the council’s theological table.”

Rollins acknowledged the sensitivity of the issue and said he had seen clashes in other areas between established cultural traditions and an influx of people with different world views. But, he said, Spartanburg has “thousands of spiritual seekers who look at their elected county officials and see no acknowledgment of their equally cherished traditions.”

Rollins stated his intention is not to attack Christianity; rather, to promote “fair prayer.” He said he’s contacted 15 area clergy and asked them to join him in silent protest at council meetings.

So far, two have responded, he said.

I don’t know how successful he will be. But it’s good to see him raising the issue. If the council doesn’t stop with the blatant Jesus-ing, lawsuits may be forthcoming.

A lot of people who advocate pre-meeting prayers say that it’s not about proselytizing. It’s not about advocating Christianity. It’s about setting the right tone for the meeting — it’s an interdenominational prayer, after all, and what’s so bad about that?

With that in mind, you have to admire this Freudian slip from the council chairman Jeff Horton:

“Clevenger does not condemn anyone,” said Horton, who identifies himself as a Christian. “He prays for all council members and everyone in Spartanburg, and always includes our fire personnel and police officers and our military personnel. He doesn’t try to convert anybody to Christianity in our service, I mean our, um, meeting. He doesn’t disparage anyone. He prays for County Council to do the right thing. And I’ll tell you, we need all the prayers we can get, because we are in some very difficult times in Spartanburg.”

I have an idea. Instead of praying, focus on solving the problems.

In the city of Woodruff (Hey, look! Same state!), Mayor Brad Burnett says the pre-council meeting prayers will go on.

Mayor Burnett then very passionately stated that “as long as I am here and I think as long as these people who are elected sitting in front of you”, referring to city council members, “we’re going to open every meeting with prayer”. As amens were heard from citizens around the room and council members James Smith, Tony Kennedy and Toni Sloan, Mayor Burnett continued… “It doesn’t make any difference if you appreciate that or you don’t appreciate that we’re going to open our meetings with prayer”

In the absence of the preacher who was scheduled to give the opening prayer, Pastor Clarence Thomas of the Cedar Grove Baptist Church, Mayor Burnett filled in with a 70-second prayer that remembered our soldiers as we approach Independence Day. Before he prayed, the Mayor stated, “I’m going to pray and when I end praying I’m going to end my prayer in the name of Jesus. So, if you are offended by that, I just want to make sure you know, where I stand”.

The Freedom From Religion Foundation has already sent them a warning letter (PDF).

The warning letter isn’t only about the prayers.

Take a look at the city’s seal: 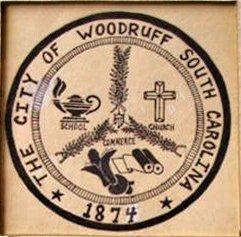 It has the word “church” right in it.

They’re just asking for a lawsuit.

Why do these people get elected when they’re dragging their cities into losing lawsuits and wasting taxpayer money in the process?

Incidentally, the American Center for Law and Justice (unofficial motto: “Justice for all… but only if you’re Christian”) sent a response letter to the FFRF’s… note that they make no point of spelling out legal precedents in their favor. Because they’d be grasping at straws.

Their only case is that the FFRF people are meanies:

Sadly, this organization mocks religious people. A quick review of their online store tells the story: CD’s with songs titled “Nothing Fails Like Prayer.” They also sell “Bible Warning” labels, and bumper stickers that read: “The Bible: A Grim Fairly Tale.” The fact is that the FFRF is focused on attacking and demeaning religion — specifically the Christian religion.

Mockery is always allowed in America.

A local government promoting a particular faith is not.

The Atheists of Florida are filing a lawsuit against the city of Lakeland. The atheists want the invocations to end.

The organization, which filed the suit Monday, suggests in the lawsuit that the city could hold a moment of silence, in which those attending could remain seated. This would allow attendees to pray, while also providing relief to those not wanting to participate in the formal invocation.

“That way no one is uncomfortable,” said EllenBeth Wachs, director of the Lakeland chapter for the Atheists of Florida. “It’s not government’s business to tell me what to do in my religious life.”

In the lawsuit, Atheists of Florida contends that the people who are chosen have a bent toward Christianity and regularly invoke the name of Jesus Christ, which the organization believes is insensitive to other beliefs and inappropriate in government.

The American Humanist Association sent a letter to Harrisburg (Pennsylvania) Mayor Linda Thompson requesting that she stop prayers during city council meetings. Their letter is far more, well, humanistic, than one which is a threat of a lawsuit:

While other organizations speaking out on this issue have raised Establishment Clause and church-state separation arguments (which indeed are valid), the AHA would like to call your attention to another aspect of this matter that apparently has gone unnoticed by you. In conducting a group prayer in the course of your employment in a workplace setting, no matter how voluntary you may feel the prayer is, you are inevitably creating an environment that marginalizes secular humanists and anyone else whose religious views would prohibit them from participating in the prayer.

Obviously, as mayor of the city and chief executive officer of city government, you are the person all other employees must respect and, ultimately, please. By suggesting that you feel it is important to start meetings with a group prayer, you are sending a message of exclusion to any employees who do not participate in that endeavor with you. Such employees no doubt would be concerned about being seen as outsiders, thereby causing them to worry about their status with you.

If these city council leaders care more about prayer than running a city, they can go run a church.

If the people in their cities were smarter, they’d vote them out of office.

In the meantime, they should keep in mind their tax dollars are being wasted over these unnecessary lawsuits.