One of the personal highlights for me at The Amazing Meeting was the chance to interview David Javerbaum, the former head writer and executive producer of The Daily Show with Jon Stewart. 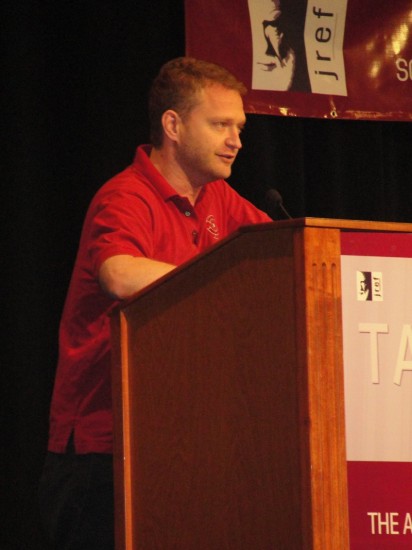 He was one of the lead authors of America (The Book): A Citizen’s Guide to Democracy Inaction and the sole author of What to Expect When You’re Expected: A Fetus’s Guide to the First Three Trimesters.

Thursday was his last day on the job. He’s now pursuing other opportunities in Hollywood.

We spoke about working on The Daily Show, the response to the Jezebel hitpiece, and the state of the media in general.

On the Jezebel situation (in which The Daily Show was accused of being a sexist workplace — the female staffers at the show responded with a message of their own):

I, in some ways, wish we hadn’t even responded to them… the women of the show were so offended by the article, personally — I, obviously, was not — that I think they felt obliged to respond on a personal level.

On the research that goes on behind the scenes at The Daily Show:

It is research that any news organization could be doing more efficiently and better than us. They just don’t want to. They just don’t do it. It’s a matter of their failure and not our success.

What are the researchers doing at The Daily Show that makes it work so well?

They’re good and they’re passionate. And they know the techniques of how to research. But, again, there’s nothing inherently comic about the idea of going back and finding hypocritical soundbytes. That’s not a comic template. That’s a journalistic template that we’ve co-opted and they have abandoned. I don’t know why that is.

Will that change anytime soon?

Does anyone in the mainstream media do a good job?

Probably a handful. But less and less… I think they’re part of the establishment at this point.

What can we do to fix that?

The acclaim we’ve gotten has been due to our happening to fill that void in a way that’s almost accidental because it’s not really what we are out to do. We’re… out to do a comedy show that’s funny and that gives us some satisfaction when we go home at night.

Jon Stewart is often criticized for not being a more hard-lined journalist or for not asking tougher questions. His response is usually that it’s a comedy show, not a news show. Is there any obligation for The Daily Show to act as a news program?

We get that a lot. I don’t know if we have an obligation journalistically. I do know there are times when Jon has felt disappointed in himself in the way an interview has gone. But I wouldn’t use the adverb ‘journalistically.’ I just think kind of personally, he feels disappointed that he wasn’t tougher in a certain way…

We [have] all been approached by outsiders with a lot of moral questions about the nature of what we do, and whether it’s journalism or moral or whatever. When you’re in the middle of a bubble, you don’t really think of it that way. You just think of it as doing your job and trying to do stuff with as much comedic integrity… as you can muster on any given day.

What do you think about polls in which Jon Stewart is named “America’s Most Trusted Newscaster“?

I think he and I would both agree that that’s a pathetic commentary… on the news media. He would happily accept anything to the effect of how funny he is. I think that’s what he thinks of himself as — that’s what we all do…

It’s like when an alcoholic has no alcohol in the house and he has to drink the shampoo. We’re like shampoo. There oughta be some 12-year-old scotch somewhere. But there ain’t, so apparently, we’re the shampoo.

What’s the future of the The Daily Show? Will it continue to be successful?

It doesn’t matter that I’m leaving. We’ve been around for 11 years. I think we have a pretty good track record. I think everybody’s collective equilibrium is very set, pretty settled… As long as Jon and the staff bring the level of passion and craft and comedy and camaraderie every day, as they have for the last 11 years, I think the show will be fine. It’s certainly settled into what it is. It’s no longer in its wild adolescence. It’s now in its middle age. We’ll probably retire before we get old.

Can the show succeed without Jon Stewart?

No. Not in the form that it is now. Some other form of it could exist, but the show is him and he is the show at this point. The network might try something — I wouldn’t blame them — but he and the show are inseparable.

What’s the relationship like between The Daily Show and The Colbert Report?

Oh, it’s like brothers. We’re the older brother and we helped create the younger brother. It’s been a hell of an hour. I think now people think of us as a team. Jon and Stephen are great friends and they’re both wonderful people and it’s been a good relationship. I’ve done some work with Stephen as well… and it’s great. It’s very rare that you get to have a spinoff that is so harmonious with the original.

What’s you favorite memory now that you have left the show?

I couldn’t pick just one. I have so many memories — they’re so formative in my creative life. It set the template… I hope, for the rest of my life, in terms of not only how to approach comedy, but just how to approach other human beings in a workplace environment, how to collaborate with people, how to analyze facts critically, which obviously is [relevant] to this convention… it’s not just one memory. At this point, It’s a whole foundational experience for me.

Are the current projects you’re working on related to politics/journalism?

Not necessarily, no. Everybody at the show, with almost no exceptions, is a comedy person, not a political person. Political people would not have gotten to the show…

Hopefully, there’s a sensibility [with my current work] that’s different. I’m leaving the show to do things that have more my voice on them, because I spent 11 years very happily contributing to a larger voice; I’m now ready to do my own stuff. I think there’s a similarity of sensibility, I hope.

I’m looking forward to not having to spend the first half hour of my work morning every morning watching Fox & Friends. Just that. That’s the thing I’ll miss the least. I don’t need to watch that anymore. I don’t need to wallow in that filth. I mean, the guys who do that all day for us, they’re like the sewer workers in Mexico who don full body costumes to go into the sewers to clean the shit out of the pipes. I don’t know how they do it. They’re heroes… It’s really hard. I mean, it really is. It’s really hard. It never got easier for me to watch. It got harder for me. I never got acclimated to it.

Is it any easier watching news shows when they’re more similar to you, ideologically?

Once in a while, when you see something that’s not bad, you think there’s a glimmer of hope. But then you’re quickly corrected.

What’s your forthcoming book Earth all about?

This book is subtitled “A Visitor’s Guide to the Human Race” and it’s the book we’re leaving behind for the aliens when they come upon our planet so we can explain what happened and what we think went wrong.

The Daily Show with Jon Stewart Presents Earth (The Book): A Visitor’s Guide to the Human Race will be published in September. You can (and should!) pre-order your copy now.

After our conversation, Javerbaum spoke to the 1300+ attendees at The Amazing Meeting. You can read about his talk here.)

July 14, 2010
University of Illinois Professor Fired for Being Anti-Gay
Next Post

July 14, 2010 Humanist Association of Ottawa Educates Psychic-Visiting Crowd
Browse Our Archives
What Are Your Thoughts?leave a comment