One of the most discussed issues from The Amazing Meeting this past weekend was Phil Plait‘s talk about how we treat people who disagree with us. In essence, “Don’t Be a Dick.”

Here’s the gist of it:

[Insert your own cliché about “catching more flies with honey than vinegar” here.]

But there’s another side that says you can and should mock religious/pseudoscientific beliefs (and in some cases, people) or be extremely blunt when regarding them because, well, they’re pretty damn silly.

There was a time when I was strictly in the “friendly” camp. There’s a reason I picked “Friendly Atheist” as this site’s name a few years ago. But — as so many of you have told me since then — I’m moving away from that.

Not a lot. But enough that the site’s name admittedly doesn’t always describe me accurately. As I’ve told some people, when you get links and stories, day after day, about the horrible effects that religion has in society, you begin to wonder what redeeming qualities faith still has. You wonder whether it’s possible to build a bridge with religious believers. And if it is possible, do you really even want to?

I think it’s possible to reach out to certain segments of the religious population. I’m still trying to do that in a number of ways. There are some issues where I have no problem being blunt about how I feel and others where I don’t mind if the other person sticks to their faith.

For example, with the recent post about Christian apologies to the GLBT community, I like those Christians. I don’t care if they’re Christian. I don’t even care if they think homosexuality is immoral if they agree with me that homosexuals deserve equal rights, including the right to marry.

This weekend, I’ll be doing a Christian/atheist dialogue at a church in Bloomington, Illinois where we’ll discuss our beliefs in front of the congregation. I love these events. Every time I’ve done one of these dialogues, Christians have told me how much they appreciated hearing a different perspective. I’m not there to mock them and I have to desire to do that. I’m there to tell them what it’s like to be an atheist, how we feel about Christians, and which stereotypes about atheists are completely untrue. Will it change their minds? Probably not. Will it offer them a perspective they may not have heard before? I hope so.

But when it comes to issues like religion in politics or people doing awful things in the name of their faith, I’m not sympathetic at all. I don’t care if I mock them or call them jerks or if I offend anyone in the process.

So where does that put me on the Atheist Spectrum?

Not every atheist is a dick or an accommodationist — or as Phil put it in his talk, a warrior or a diplomat. Most of us are somewhere closer to the middle.

For what it’s worth, I think PZ Myers is closer to Phil’s side than a lot of people give him credit for. For that matter, so is Richard Dawkins.

It can get easily muddled, though. I don’t think we should give credit to religion where none is due. Like atheists who insist that religion and science are compatible. They’re not. I don’t care that some scientists are religious — they’re lying to themselves or compartmentalizing to the point that even they don’t see the problem.

I don’t care where you lie on the spectrum. I think there’s room for all types. I’ve gotten enough emails from once-religious readers to know that being civil and willing to engage with believers has its benefits. But a lot of atheist bloggers get those emails, even if they’re more critical of religious believers. Different believers will respond positively to different kinds of atheists.

It would be great if logical thinking was enough to convince people their absurd beliefs were wrong, but that just doesn’t happen in real life. PZ writes that slow and steady reasoning with believers-in-the-supernatural isn’t the only option:

… shock also works. Ultimately, people hold their religious beliefs for emotional reasons; deep down, fear and comfort, disgust and empathy are the tools religion uses to manipulate natural human desires. We would be idiots to shun emotional appeals, and it would also play into the ridiculous Spock stereotype of atheists as cold dead soulless people who substitute math for passion.

Sometimes you can reason people out of deeply held beliefs. But it helps if first you stir their discontent with those beliefs, if you wake them up to the fact that they look ridiculous…and that yes, there is a whole group of people who are laughing at them.

On a side note, I love that we’re having this discussion. It’s good to hear atheists willing to criticize other atheists. It’s healthy to have this debate.

David Hayward is referring to something very different, but I think his cartoon could apply here: 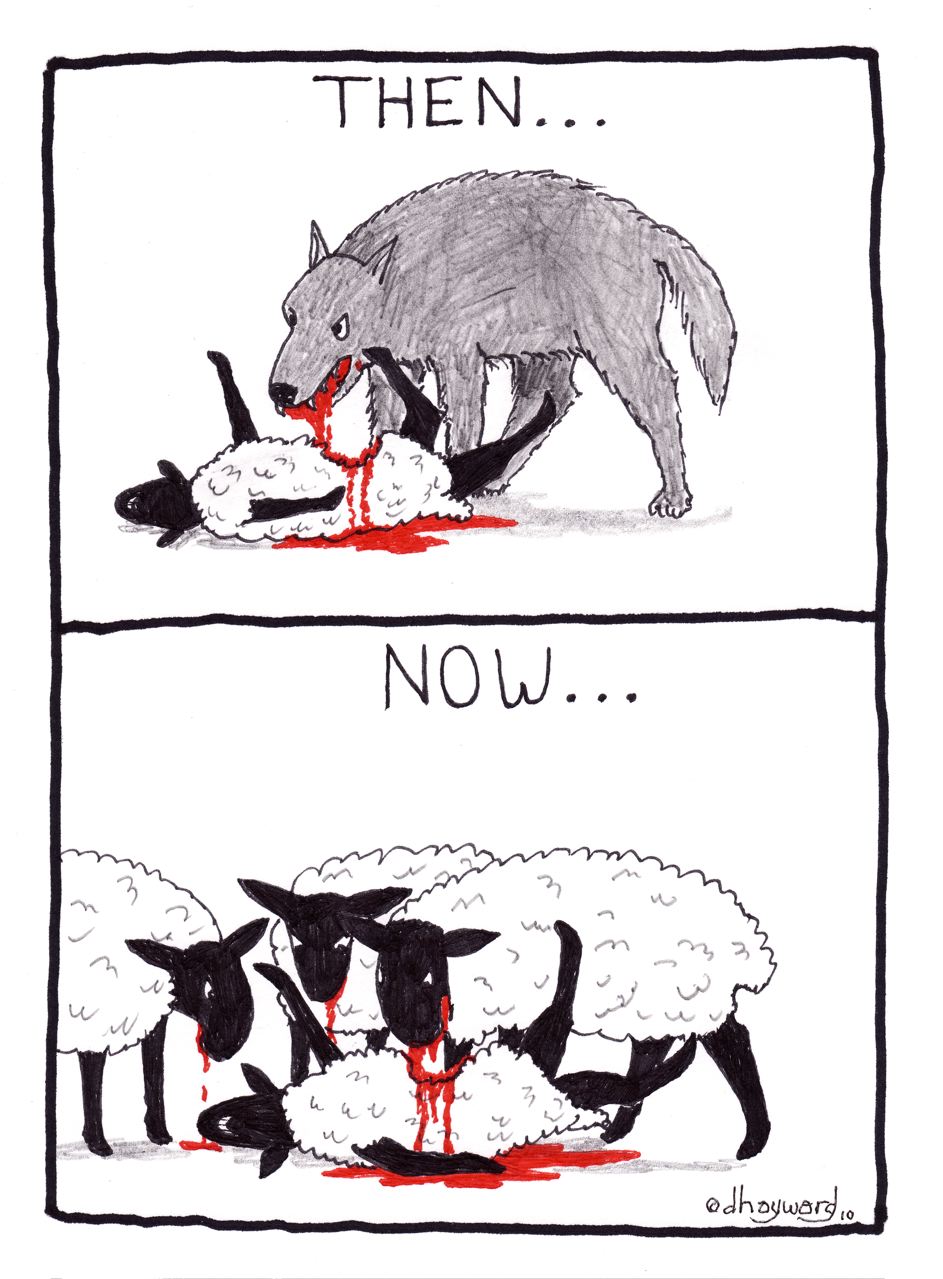 It’s not always a bad thing to go after each other. It makes all of us stronger when we can get through it, and better able to tackle the other side.

Do you consider yourself a “warrior” or “diplomat” or something else entirely?