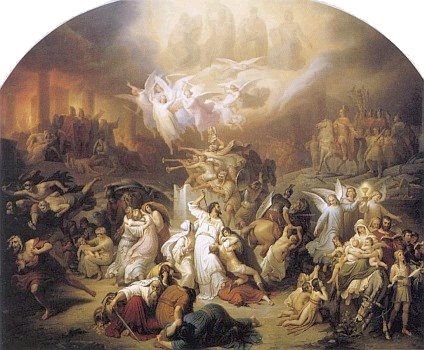 Someone is suing the church. No, it’s not the Catholic Church and it’s not about the whole “raping children” thing. In Australia, the Agape Ministries used claims about a doomsday to trick the congregation into donating. The predicted doomsday didn’t happen (as you might have noticed). Now, two particular members who donated a combined $1.4 million want their money back.

That plaintiff and another former church member, Martin Penney, are suing pastor Rocco Leo and two of his associates, Joe Venziano and Mari-Antionette Veneziano.

They want their money back, claiming they handed over more than $400,000 and $1 million respectively to the church based on lies about a doomsday scenario.

A lawyer representing both plaintiffs, David Riggall, told the hearing it was possible the suppressed case may be resolved without going to trial.

I know there’s an impulse to blame the victims. Let’s get it out of our system: yes, it was foolish to believe the claims in the first place.

But I feel bad for them. They were taken in by a dangerous meme and exploited by a devious pastor. They truly believed that giving the pastor their money was the right thing to do. We need to spread critical thinking and skepticism to help make this sort of thing less likely.

Ok, I’ll admit that I chuckled a bit at the situation. But the end of the article sobered me up in a hurry:

Ms Baligod said she believed many other people wanted to come forward with civil claims, but were scared. “A lot of them have been threatened by insiders, with death threats as I understand it,” she said.

Ugh. It’s bad enough to con people out of their money. But if the allegations of death threats are true, it’s a whole new level.

July 12, 2010
Nothing Happens When You Lose Your Faith
Next Post