You can read previous sessions here, here, and here.

Massimo Pigliucci is the first speaker this morning. He’s introduced as a man who has three PhDs… (Take *that*, all of you working on your first.) 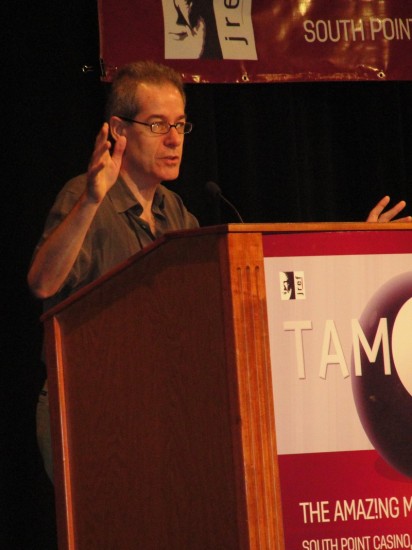 He’s talking about the limits of skepticism.

What happens when people who know a lot about science are not only wrong, but spectacularly wrong?

Then, unlike some of the previous speakers, he starts naming names… this should be good 🙂

Massimo takes on Penn & Teller’s Bullshit!. In one episode on the environment, they interviewed one “expert” — and the person was an expert in economics, not climate change. What gives?

Bill Maher is no better. He’s quoted as saying, “People who get flu shots are idiots” and “I would never get a swine flu vaccine or any vaccine. I don’t trust the government, especially with my health.”

Michael Shermer is brought up as an example of someone who was once openly a climate change denier, but after weighing the evidence, he changed his mind.

Massimo brings up the problem of hubris in our community:

We all know people who engage in anti-intellectualism. We don’t want to stoop to their level. The root problem, Massimo says, is ideology.

No one rejects evolution for scientific reasons — it’s religious ideology.

Why deny climate change? It’s tough to say because of science. It’s because of political ideology.

There’s something about a man with an accent that makes it all the more humorous when he says (quoting XKCD):

“But you know what? Science works, bitches!”

Here’s a trend occurring at TAM: Speakers criticizing our own community for the mistakes we make. Phil Plait and Carol Tavris both did this yesterday. Massimo’s doing it now. It’s always a good sign when you’re able to take a reflective look at yourself, and these talks are no exception. 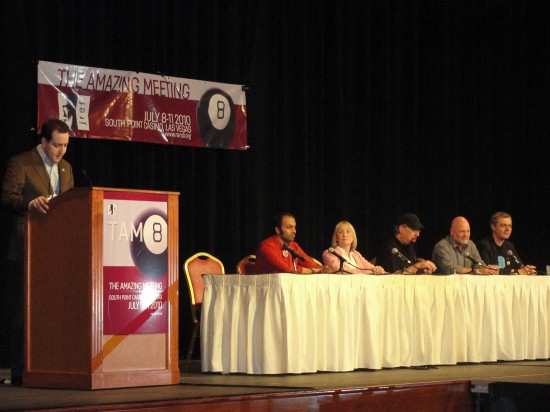 Question: Is the distinction between local groups and national groups still relevant?

Dr. Jen points out that a lot of local groups have no national group to “latch on to,” which makes them all the more necessary.

Sid agrees — the local groups also tend to have fresh ideas, such as the 10:23 campaign against homeopathy. 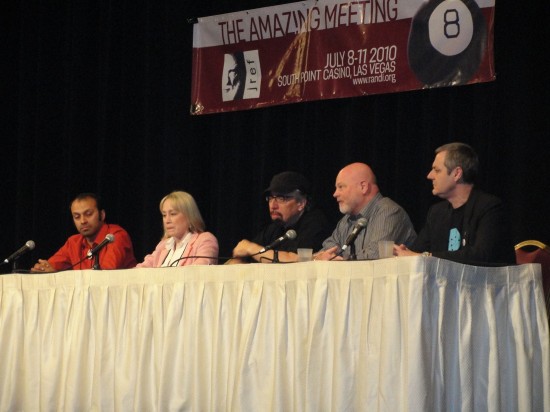 Hemant just ran off, so now you’re stuck with me again (Jen from Blag Hag, or how I’m better known at the conference, “that boobquake girl”).

Here’s a really great suggestion — media training. As someone who has run a non-theist organization for three years, this can be essential. You don’t want to stick your foot in your mouth and look the whole organization look bad.

Now Feldman asks about the virtual side — what about individual bloggers or tweeters (or as Jamy suggests, “twats”)? Dr. Jen points out that blogs are often the opinions of individuals, so you have to take them with a grain of salt because you don’t know how thoroughly investigated they are. They can be used for both good and evil (speaking of evil bloggers, it is so tempting to post silly things while I have access to Hemant’s blog. Being good).

Will virtual communities replace local or national groups? Probably not. “People will be people, and people will still want to drink and get in hot tubs.” I think this pretty accurately sums up TAM so far.

Jamy: “The most important purpose of local groups is the social side.” So true. It doesn’t have to be about activism — sometimes keeping each other sane is reason enough to meet.

But Chip makes a good point — it’s rewarding to feel like you’ve accomplished something, so don’t just do social activities. Even small opportunities are worthwhile.

Woot, and now a shout out for campus groups! As someone who started a college group, I definitely agree that it’s important to organize students. We’re some of the most passionate people out there.

An audience member asked about how hard it is to start their own local group. While it can take a lot of time, it’s not too bad if you can get others to volunteer. And getting a group running is such a rewarding experience that it’s usually not too hard to find someone else to help — it’s worth it in the long run.

It’s Hemant again. Back from the most exciting interview *ever*… really, I got nervous. Richard Dawkins no longer makes me nervous. I saw Adam Savage the other night and I felt nothing — nothing. But this interview? I was all stuttering and trying to impress the person. More on that soon…

Next up: Bruce Hood, the author of Supersense. (I reviewed the book last year.)

His talk is on the origins of secular supernatural beliefs — me or memes? (Or he suggested the alternate title: “Why People Believe in Weird Shit.”) 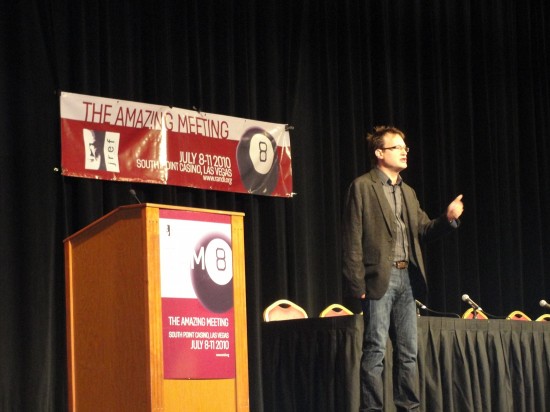 He asks us a few questions — I love these, by the way — to see what the reaction of skeptics would be:

Why do skeptics hesitate on these questions?

In fact, why do we still cling to our childhood toys/blankets when we don’t really need them anymore? The answer may have to do with “Essentialism” (Google it).

(Side note: Tweeter @SatansParakeet makes an amusing point: Hood “seems determined to undermine the bidding on” Adam Savage’s hat, which is up for bid in a silent auction.)

After showing us an auditory illusion, Hood makes his point:

“You don’t have any direct privileged access to reality.”

We’re not that much better than everyone else, but hopefully, we’re smart enough to question even our own thinking.

(Side note: Hood is an excellent speaker. How do I know this? He stepped away from the podium. Simple thing to do, but very effective.)

Hood notes that when we’re primed, we can *think* we’re hearing (or seeing) anything — it’s how pareidolia works.

For example, this video:

We’re not all as clear cut as believers versus non-believers, says Hood. He then makes three main points about how/why skeptics can still hold silly beliefs:

— Individuals operate with two reasoning systems — intuitive and analytical. People switch between then.

— Supernatural beliefs may decline but may never truly disappear.

We need to focus on why some people believe what they do. Perhaps we’re wired to believe in woo.

Finally, this session, we have a panel on Homeopathy, Acupuncture, Chiropractic, and other dubious health care systems. Steve Novella is moderating, and he’s joined by Rachael Dunlop, Harriet Hall, Ginger Campbell, David Gorski, and Simon Singh. (Left to right in pic below.) 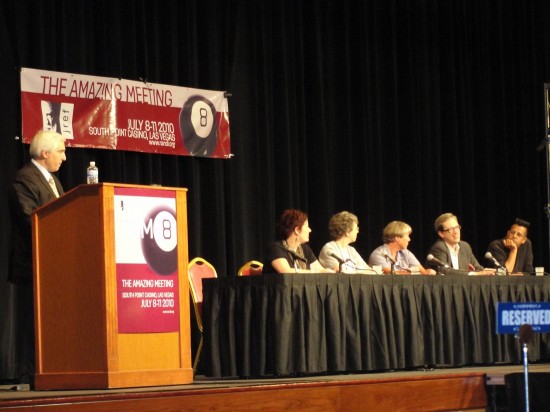 The topics of this session as referred to as the “unsinkable rubber ducks” (in the words of Randi).

Hall points out that “licensing” is a problem in getting rid of this woo — anybody can be licensed. Including psychics. What good does that do?

Campbell takes exception to criticism of massage therapy. It’s not woo; it’s “in the grey zone.”

Singh says regulation could help, because it might protect patients, but it could also lead to a slippery slope. (Would we ever have to teach this woo in a classroom?) 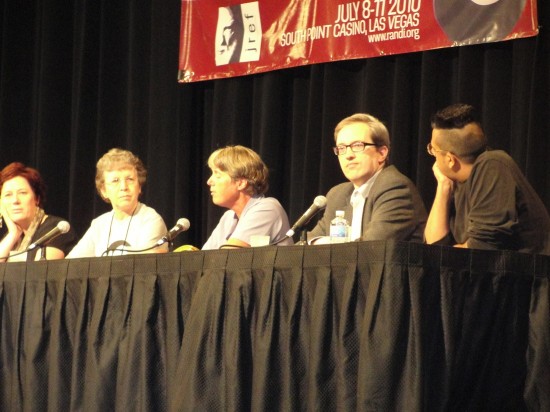 Singh points out that if he wanted to set up shop as a homeopath, he could do so immediately and start seeing patients. But in order to treat animals, you need real qualifications. Crazy, no?

The panel mentions “homeopathic hospitals” — those things exist? I had no idea. One Tweeter writes:

So what is a homeopathic hospital? An Olympic swimming pool someone’s dropped a brick in?

Gorski says that he’s spoken to medical students about homeopathy. If they don’t know the term, he explains it. And they’re amazed that anyone could believe in that bullshit.

That’s homeopathy for you. The companies who create homeopathic drugs care nothing about patients. They care about money. It’s not like “regular” drug companies care about you, either, but at least they pay scientists to create drugs that work (or face the risk of lawsuits).

Campbell adds: If you want to actually do something useful, “get the homeopathic stuff out of Wal-Mart!”

Hall tells a story about how she wrote an article speaking out against acupuncture. Someone wrote to her to complain about it and she urged him to do his own research. He later told her he couldn’t find any and stopped believing in it.

(Interesting to note that she didn’t demonize him for believing in it, but politely suggested he do his own research. She could have also pointed him in the right direction. It’s all part of a theme at #TAM8 to be civil and courteous when dealing with someone who disagrees with you, instead of calling them names.)

There are rotten people out there who seek to take advantage of gullible people who may be sick and looking for any “medicine” to get better. Singh has a term for people like that who are nasty no matter which way you look at them: “Spherical bastards.”

Your goal for today is to use that term in a sentence.

Lunch time. The afternoon session has The Daily Show‘s David Javerbaum, Paul Provenza, and Jennifer Michael Hecht! Be back in a couple hours.