James Randi isn’t on stage right now because he’s doing an interview for Playboy. (I assume this will go along with his centerfold.)

With over 1300 registrants, this is the largest TAM of all time. Many hands across the conference room shot up to say this was their first time at a TAM conference. Though between blogs, podcasts, forums, and Twitter, it’d be tough to say there are a lot of strangers here.

Michael Shermer is essentially rehashing his most recent TED talk. It’s funny and interesting material, but I wonder how many in the audience haven’t heard it before.

I wonder whether it’s too much to ask for a highly-respected skeptic to give his *biggest* supporters a talk they haven’t heard before — to challenge them or test out new material.

Sean Faircloth, the Executive Director of the Secular Coalition for America, is next. It’s a very pleasant sight to see him on the roster of speakers. There’s a lot of talk over whether skeptic groups and atheists groups should be one and the same — in my experience, the skeptics movement has shied away from tackling god in the same way atheists do.

But this is the sort of “reaching out” to the atheist side I appreciate. Sean definitely speaks on behalf of most of us in the audience, but I don’t think you would’ve seen him giving a talk at TAM a few years ago.

This audience is virtually silent as Sean tells stories of the incredible horrors that religious groups have gotten away with because of “pressure on politicians” for faith-healing exemptions.

Sean’s now talking about faith-based discrimination that is legal in our system.

“Politicians are understandably afraid to speak out.”

As former Majority Whip in the Maine legislature, Sean’s explaining how politicians recruit candidates. What happens when a candidate previously made statements against religion? For example:

“They (preachers) dread the advance of science as witches do the approach of daylight.”

We know that candidate would stand no chance in hell of getting elected in our society today.

But that quote came from Thomas Jefferson.

Sean’s a very effective speaker. I feel like I’ve seen him talk so many times, I’ve grown immune to that. But it’s amazing watching the audience listen to him.

They appreciate that he’s using his time not to promote the SCA, but to talk about how everyone can take action to achieve our shared goals.

(Hey, you can always donate here!)

He closes with what we need to be doing to reach out to potential theistic allies:

“Before the decade is over, we will have a Secular Coalition in every state.” 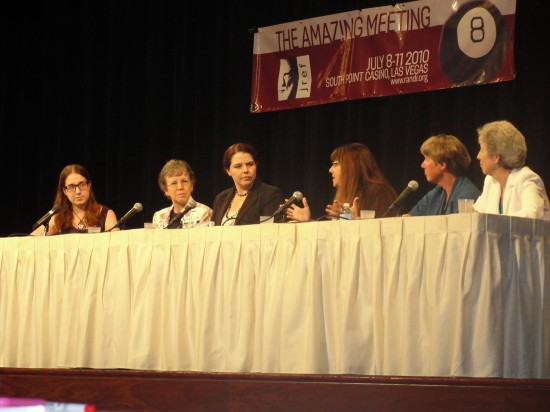 A few tweeters point out that the speakers with their own timeslots are almost all men (just glancing at the schedule, it’s about a 3:1, male:female speaker ratio). And I think all the “solo speakers” who are female are already on this panel. Is it fair to just “throw” women up on a panel and claim gender diversity in the skeptic community?

Jeff Wagg of JREF points out that they’ve actively reached out to women. Last year, 8 women were invited to speak at TAM. 2 said yes. 1 of those women had to cancel. It’s not like they’re not trying.

They asked for a show of hands for the women in the audience, and a *huge* number of arms shot up. This bodes well.

“It’s much easier for me to point to the Women of Woo than the Women of Skepticism” — Pamela Gay, referring to people like (psychic) Sylvia Browne and (anti-vaxer) Jenny McCarthy

“I was given a C by my high school physics teacher to make sure I wouldn’t get into a good university.” — Pamela Gay, referring to how her teacher tried to “protect” her from certain male-dominated fields 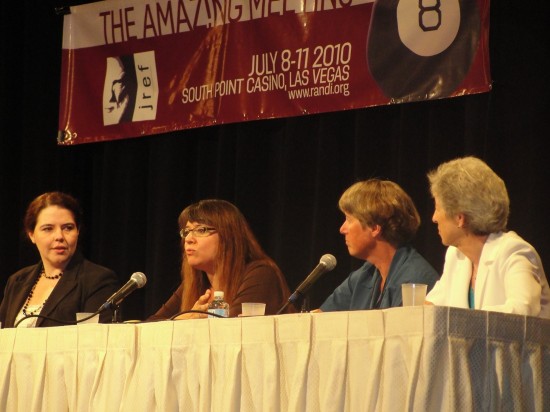 The last session for the morning is James Randi, interviewed by Jamy Ian Swiss. 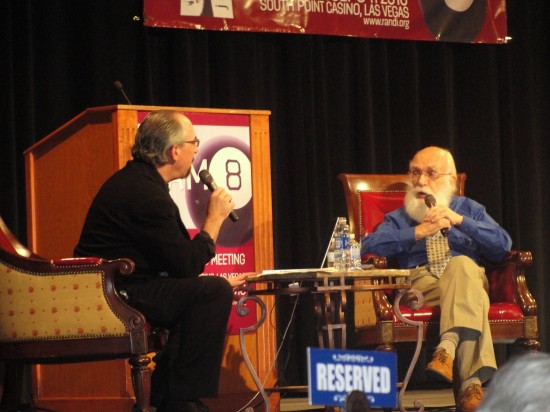 They’re showing clips from Randi’s appearances on the Tonight Show Starring Johnny Carson and discussing what happened during those clips. The recollections are nostalgic and hilarious.

I came to TAM three years ago, and I remember some of these stories. They never seem to get old… and I don’t think anyone minds if he retells something he’s told many times before.

This year, they’re not mentioning con artist Uri Geller as much as in the past. 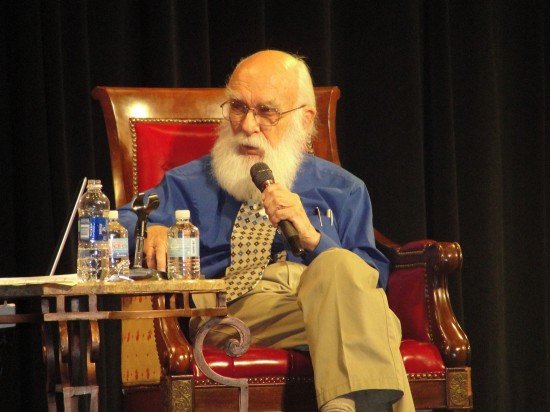 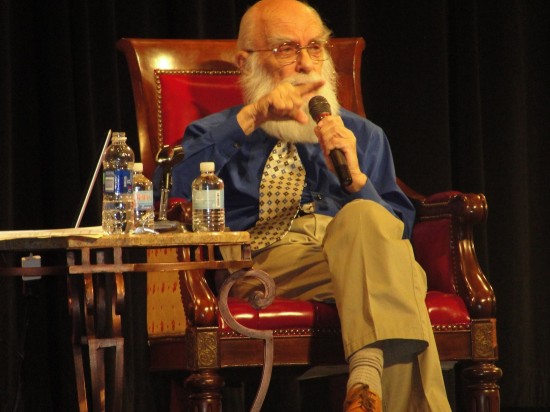 Swiss brings up the Peter Popoff scandal — it’s a great clip if you haven’t seen it. When Carson found out that Popoff’s wife was feeding him information about audience members’ ailments — and it wasn’t God telling him anything at all — he told two actresses that they needed to reschedule their appearances so that Randi could come on air to discuss Popoff 🙂

“PEOPLE DON’T LEARN!” — Randi, talking about how people still gave money to Popoff after he had been publicly debunked.

Randi had Carson’s personal phone number and they would have long discussions even after Carson’s retirement.

I need more famous friends. Please send me their names and numbers.

As they show these clips, I have to wonder why we don’t have more public debunkings on late night TV shows. It’d be perfect for The Colbert Report. They’d bring in ratings, there are excellent debunkers out there who would look good on camera, and it would provide a useful service. Do we really need to hear another low-grade actor instead of the next Randi?

Time for lunch. Be back in a couple hours.

July 9, 2010 Liveblogging The Amazing Meeting 8: Friday Afternoon Sessions
Browse Our Archives
What Are Your Thoughts?leave a comment