You can read previous sessions here and here.

This is Jen from Blag Hag again – Hemant is off doing interview-y things, so I’m still liveblogging away!

The next speaker is Pamela Gay, skeptic and astronomer. 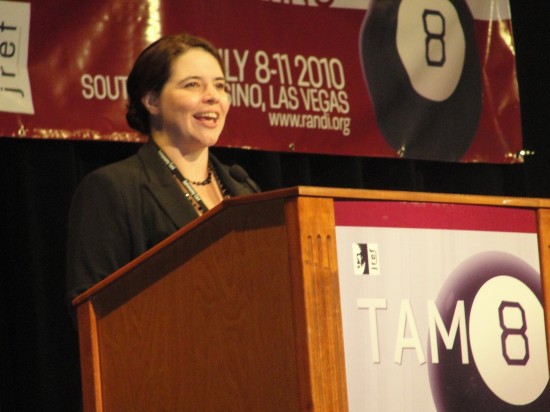 There are more clergy in the United States than Scientists — 1 in 3,280 for clergy, 1 in 3,750 for scientists. But even though we’re similar in numbers, people don’t always get to interact with scientists, so a lot learn from stereotypes like Big Bang Theory (which, ok, is still kind of awesome).

To help spread interest in science, she is part of the Citizen Science Alliance, which works to increase the interactions between scientists and the general public.

“You can imagine how many galaxies you can make a graduate student look at before they tell you where you can put your galaxies.”

Good to know astronomy grad students have it the same as biologists, haha.

One of their current projects is Galaxy Zoo, which asks anyone interested on the internet to help classify galaxies. Random people have classified thousands of galaxies, and even discovered new types. I know what I’m going to be doing when I get home!

Projects like this help scientists immensely. Computers can’t always search as well as humans, and there just aren’t enough scientists to be mining data. I wonder if biologists will eventually turn to this tactic with all the mountains of genomic data we’re starting to produce. Just imagine a website that asks you to search for genes, retroviruses, microsatellites… Okay, maybe it’s just me that find that really cool.

Phil Plait is up. While my camera is charging, here’s him switching glasses with Adam Savage! 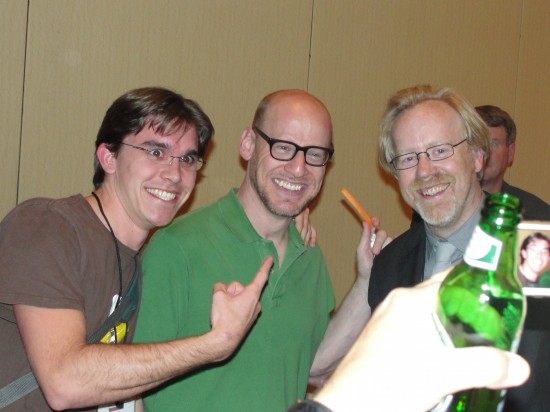 Phil asks the audience how many of us believed in something we now disavow — flying saucers, horoscopes, religion, etc.

Many hands go up.

He asks the audience how many of us changed our minds because someone called us stupid, ignorant, retarded, etc.

The hands went down.

“The message we’re trying to convey is hard all by its lonesome… in many cases, people will prefer magic over science and fantasy over reality…

Wy would you want to make it harder to deliver that message?”

As someone who’s spoken with several Christians, in public forums, over the past few years, I have to agree. The name-calling may make us feel superior, but it doesn’t help achieve the end goal.

Why are so many atheists/skeptics jerks? Phil explains part of it has to do with frustration, having to debunk the same stuff over and over and over… and we’re shocked that anyone could still believe it. There’s also anger, which can be a loaded weapon.

Phil references chess: You can sacrifice a piece for the greatest goal. What is your goal when you speak to a believer? Calling them morons — or baby-rapers in certain cases — may make you feel smug and superior, but are you trying to win a point “or win the damn game”?

By the way, at no point here is Phil mentioning any names of atheists who do any of these things. Hmm… (Somewhere in the audience is PZ’s wife. Wonder what she thinks about all this…)

Phil adds: “We don’t need warriors. What we need are diplomats.”

(This is a constant source of debate in our community. Many people would argue that we need both.)

I think it’s possible to have conversations with believers (in anything foolish) without resorting to name-calling. But I’m not sure we have to give anything up in the process. And I think it can be dangerous to be an accommodationist, seceding certain truths in order to “win” the bigger game.

Phil leaves us with a couple things to consider:

1) What is your goal? Before you blog or comment or send a email, ask the question Is this going to help? Or Will this impede me reaching that goal?

2) Don’t be a dick. All it does is score cheap points, and “it doesn’t win over hearts and minds.”

A couple other choice soundbytes:

Referring to the Simon Singh case:

“Homeopathy may be diluting itself out of existence in the UK.”

“Teach a man to reason and he’ll think for a lifetime.”

Incidentally, I sat down with Phil for a ~30 minute interview. He talked about a *ton* of subjects, including the Christian mindset, the PepsiCo/ScienceBlogs controversy, and his Super Secret Project. I’ll post that when I get back home.

Next up: Dr. Carol Tavris, a social psychologist.

Her talk is on “Science, Skepticism, and Self-Deception.” 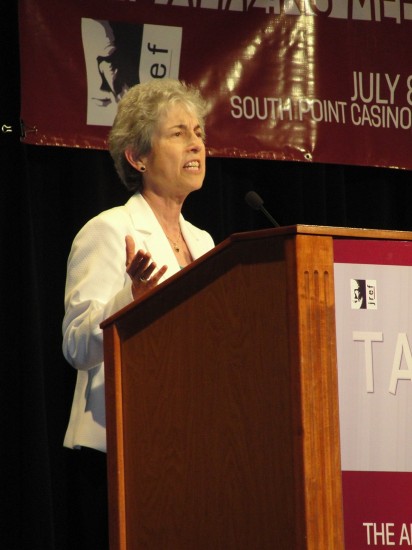 Tavris asks: What would it take for someone to thank you for helping them understand a particular issue? Whether that’s a life-saving procedure they should consider or the notion that god doesn’t exist, the answer may be the same thing.

Now, we get into talking about cognitive dissonance and why it’s so difficult to get people to change their minds.

The brain is wired for three particular biases:

(About #2, Tavris mentions that a study at a fundamentalist Christian school found that most students there thought of themselves as “humbler” than average.)

Tavris adds: Each act of self justification makes that that much more harder to tell ourselves we’re wrong.

So what should we do? We need to know where the other person is coming from. If they’re never made a commitment, it’s easier to persuade them. If they’ve spent their lives dedicated to whatever you disagree with, diplomacy helps, as Phil said earlier. Otherwise, you “force them to cling even more tenaciously” to whatever belief they have. I completely agree with her.

As we get read for the final panel, Eugenie Scott from the National Center for Science Education makes a surprise appearance on stage… says a few words… and gets a huge ovation herself. That’s impressive. 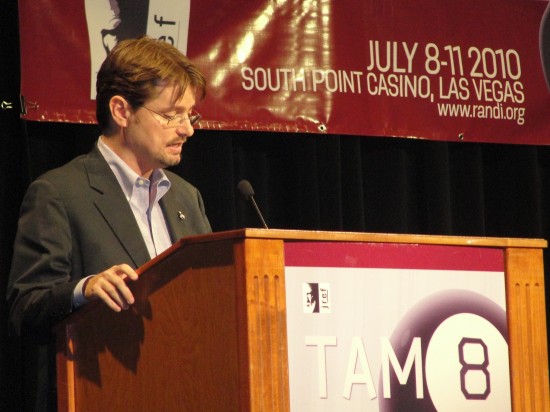 They open with a tape of the recently-deceased Martin Gardner.

Randi is speaking at the podium about Gardner. I can only see his face. It’s kinda scary/awesome. 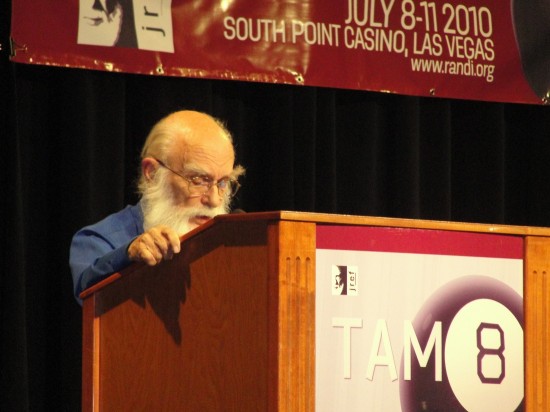 It’s a strange thing, seeing these “legends” of the movement onstage. They have such respect from within the community. But the tweeters are relatively quiet (they were using their thumbs nonstop earlier). The audience seems antsy (though it’s also late in the day).

I wonder if people care about the origins of these organizations as much as what’s going on now and what they can do to help.

Hyman brings up the “Skeptic’s Curse” — it’s hard for us to tell people “you’re wrong” without alienating them.

I think a lot of people see that as anything but a curse. We thrive on telling people they’re wrong 🙂

When asked about the skeptics/atheists overlap, Randi mentions that JREF is NOT an atheist organization, but they will go after testable religious claims. He also says that many religious claims are not testable.

Kurtz adds that we don’t need to be a skeptic about everything (what do we let slide? I’m not sure) and that Martin Gardner believed in a god and he (Kurtz) found that “charming.”

After Randi gives Kurtz a lifetime achievement award, Kurtz and Randi hugged onstage, to the approval of the audience.

Done for the day. Thanks to Jen for helping me liveblog and Jamie for taking great pictures! We’ll be back tomorrow morning for talks from The Daily Show‘s David Javerbaum, Jennifer Michael Hecht, Paul Provenza, and Richard Dawkins!

July 10, 2010 If Everyone Vandalized the Billboard...
Browse Our Archives
What Are Your Thoughts?leave a comment