What’s one major difference between Skeptic conferences and Atheist conferences?

Atheists’ lunch = a vegan would be proud.

First up this afternoon is Simon Singh, who recently won his appeal against the British Chiropractic Association.

Yesterday, when I arrived in Vegas, I boarded the shuttle to the hotel. Right behind me was Singh. The fanboy in me got all excited, because my bag contained two of my favorite books: Fermat’s Enigma and Big Bang. He graciously signed them for me, and we had a nice conversation in line waiting to get our hotel keys. 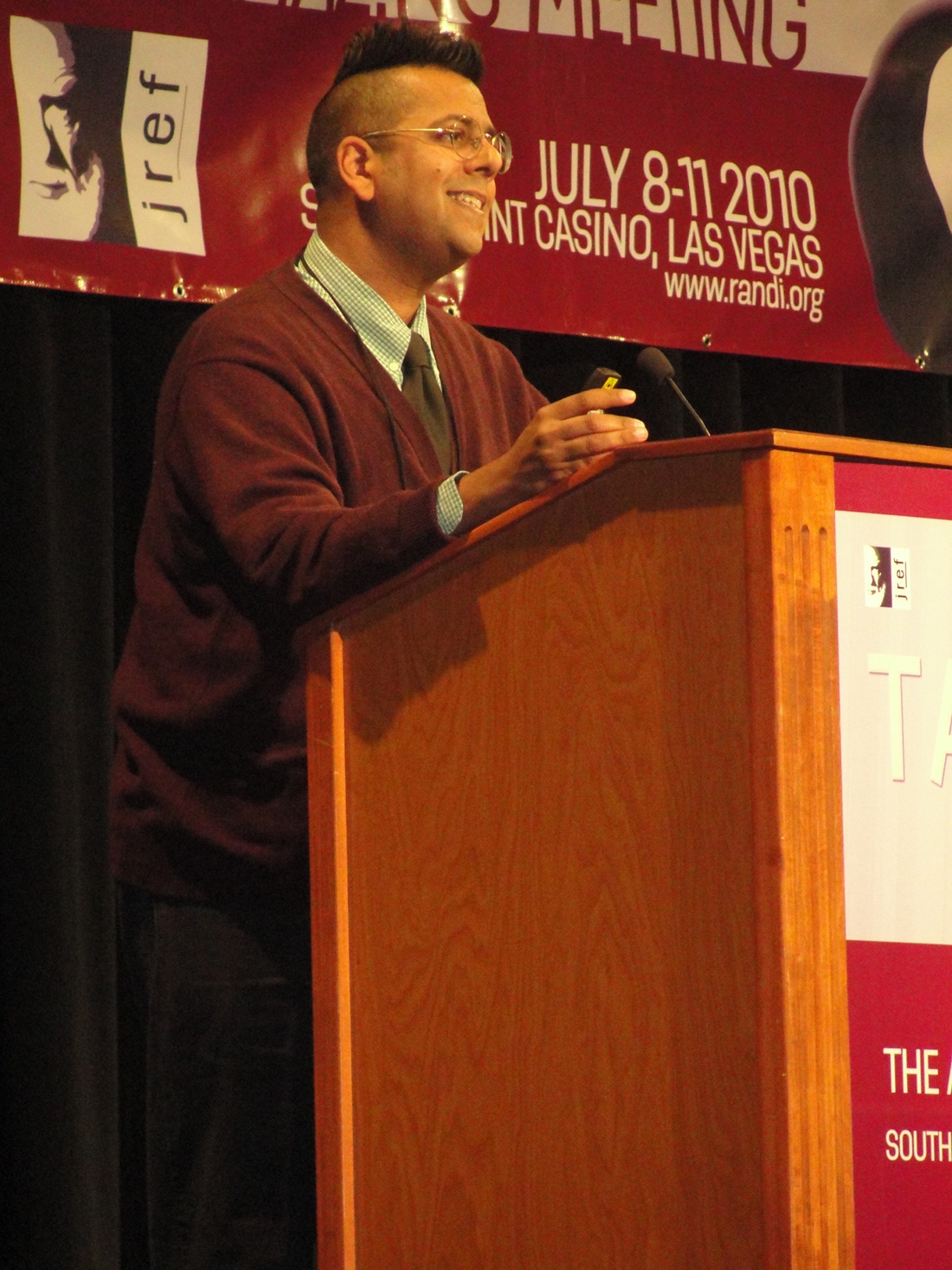 We are twelve billion light years from the edge,
That’s a guess,
No-one can ever say it’s true
But I know that I will always be with you.

Singh rewrote the lyrics to be more accurate and — to her credit — Melua rerecorded that verse for the BBC. You can hear her version at the end of Michael Shermer’s TED talk from a couple years ago (go to around the 12:00 mark):

Singh explains his case with the BCA — you can read more background here:

I went to the Guardian and said they’re threatening to sue me. What are we going to do? And the Guardian said, “Not so fast with the ‘we’…” — Singh, referring to when he was initially sued by the BCA 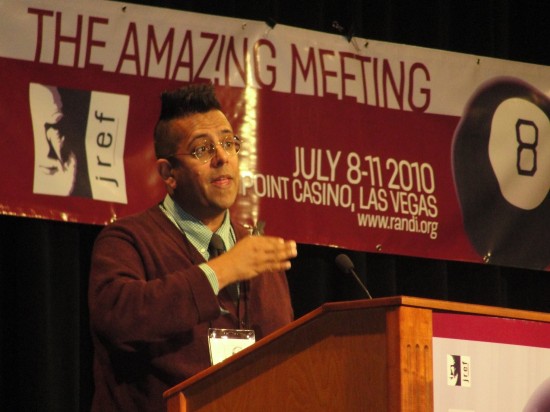 I’m going to run and conduct an interview, so Blaghag is going to take over liveblogging for a little while! Be kind 🙂

Hey, this is Jen! I promise I’ll keep liveblogging instead of posting embarrassing things all over Hemant’s blog (as much as the evil part of me wants to, mwahahaha).

Singh is now noting how the recent campaign to reform libel laws in the UK was spearheaded by grassroots efforts and bloggers bringing attention to the issue. See, us bloggers aren’t totally worthless! And it’s a good thing too – the average cost of a libel case in England is almost 100 times that than other places in the world.

Lord Lester has written a Defamation Bill to modernize the system of libel in the UK. Today was the second reading of the bill, where it was debated for four hours. The majority of people were favorable towards the bill, and the government is going to embrace libel reform.

A deserved standing ovation after all the drama Singh went through the last two years! 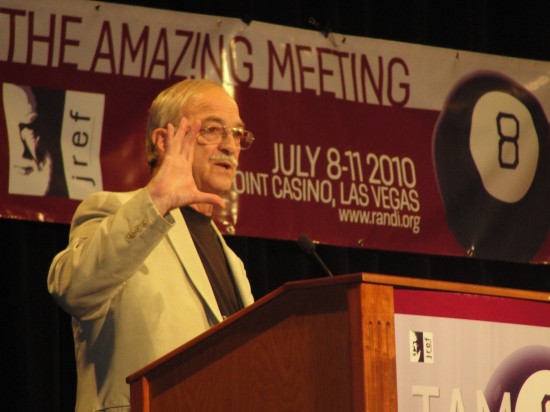 Dr. Nickell is basically spying on certain paranormal activities. For example, he went undercover to Chesterfield, which is known for how much it embraces the paranormal. At a church service, he was asked to fill out a slip where he included a question to a departed relative. He asked if his mother would always be there for him. Later after “consulting spirits,” he was told that his mother would always be there for him. Too bad his mother was still alive. Unfortunately, people fall for these things because they can be comforting.

Apparently we all have spirit guides, and there is a woman who specialized in drawing them. Nickell says how one night in a dream he saw his spirit guide, a Native American with two yellow feathers sticking out of his head. So she contacted him, and sure enough her drawing was of a Native American with two yellow feathers on his head! Amazing. How do some people get duped by stuff like this?

Some updates: They just finished filming the 191st hour of the show. They just signed a deal to stay on the air for five more years. They just got nominated for an Emmy for Outstanding Reality Program. They are now the longest running show on the Discovery Channel and it’s highest rated show for several of those years.

A couple months ago, Adam and his cohost Jamie Hyneman accepted the Harvard Secular Society’s “Outstanding Lifetime Achievement Award in Cultural Humanism.” He’s now reading the speech that he gave there.

… I understand the desire for someone to be in charge. (As a side note, I believe that the need for conspiracy theories is similar to the need for God.) We’d all like our good and evil to be like it is in the movies: specific and horrible, easy to defeat. But it’s not. It’s banal.

No one is in charge. And honestly, that’s even cooler.

The idea of an ordered and elegant universe is a lovely one. One worth clinging to. But you don’t need religion to appreciate the ordered existence. It’s not just an idea, it’s reality. We’re discovering the hidden orders of the universe every day. The inverse square law of gravitation is amazing. Fractals, the theory of relativity, the genome: these are magnificently beautiful constructs.

The nearly infinite set of dominoes that have fallen into each other in order for us to be here tonight is unfathomable. Truly unfathomable. But it is logical. We don’t know all the steps in that logic, but we’re learning more about it every day. Learning, expanding our consciousness, singly and universally.

As far as I can see, the three main intolerant religions in the world aren’t helping in that mission. 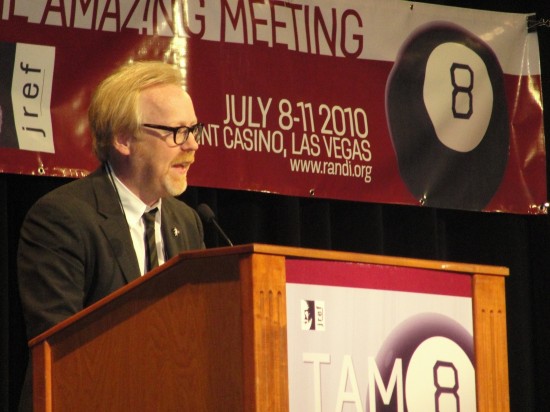 Note to people asking Adam questions: Don’t ask him to come to your group’s event in front of everyone. It’s tacky.

Also, in a room full of skeptics, telling Adam what you think the *real* story is behind the moon landing = Not smart.

There’s a short break in a bit, I’m running out, Jen’s coming back, and Pamela Gay is next on the agenda.

Someone asked if they would do a kids friendly version of Mythbusters…isn’t Mythbusters kid friendly already? And Adam mentioned when nerdy kids meet him, they kind of squeal and go “You’re REAL!” I had this identical reaction last night.

Another person asked if there would be new skeptical programming on Discovery like Mythbusters. I think Mythbusters: After Dark where they debunk sexual myths would be a real winner. You know you’d watch it.

And now they’re auctioning off part of their duct tape bridge! Neat. The auction is apparently taking place with Adam running through the aisles with his duct tape. I approve.

It just sold for $650. Does this set a record for most expensive piece of duct tape?

July 9, 2010 Liveblogging The Amazing Meeting 8: Friday Late Afternoon Sessions
Browse Our Archives
What Are Your Thoughts?leave a comment