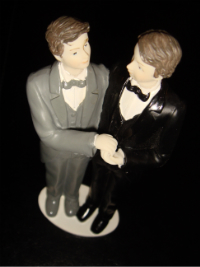 Big news occurred last night. No, sports fans, I’m talking about major step toward marriage equality, not LeBron James going to the Miami Heat. In two cases yesterday, a U.S. judge in Boston ruled that the Defense of Marriage Act – the federal law against same-sex marriage – is unconstitutional.

In the case brought by Attorney General Martha Coakley, Judge Tauro found that the 1996 law, known as the Defense of Marriage Act, or DOMA, compels Massachusetts to discriminate against its own citizens in order to receive federal funds for certain programs.

“This court has determined that it is clearly within the authority of the Commonwealth to recognize same-sex marriages among its residents, and to afford those individuals in same-sex marriages any benefits, rights, and privileges to which they are entitled by virtue of their marital status,” Judge Tauro wrote. “The federal government, by enacting and enforcing DOMA, plainly encroaches upon the firmly entrenched province of the state.”

Wow, it’s not every day you see a states’ rights argument being used for a culturally liberal cause!

But it’s his opinion (pdf) for the second case, brought by the gay-rights group GLAD, that really caught my attention. Judge Tauro had some blunt words, going so far as to call DOMA the result of “irrational prejudice”:

And where, as here, “there is no reason to believe that the disadvantaged class is different, in relevant respects” from a similarly situated class, this court may conclude that it is only irrational prejudice that motivates the challenged classification. As irrational prejudice plainly never constitutes a legitimate government interest, this court must hold that Section 3 of DOMA as applied to Plaintiffs violates the equal protection principles embodied in the Fifth Amendment to the United States Constitution.

Damn straight. If there were some legitimate government interest involved, the courts would have had to weigh the government’s right to pursue that interest at the expense of citizens’ rights. But Judge Tauro was having none of it. He called congress out, saying that they “undertook this classification for the one purpose that lies entirely outside of legislative bounds, to disadvantage a group of which it disapproves. And such a classification, the Constitution clearly will not permit.”

There is absolutely no good secular reason to deny gays and lesbians the right to marry. Obama has been making some progress in granting equality to federal workers, but DOMA has stood in his way. Both cases will obviously be appealed up to the higher courts, and I’m curious to see what happens. I don’t know whether these lawsuits will hold up, but if they do, the door is open for more sweeping reform.

July 9, 2010 Overcome Our Fear of Being Tiny
Browse Our Archives
What Are Your Thoughts?leave a comment