The North Carolina Secular Association put up a billboard along the Billy Graham Parkway recently and it was vandalized within a week: 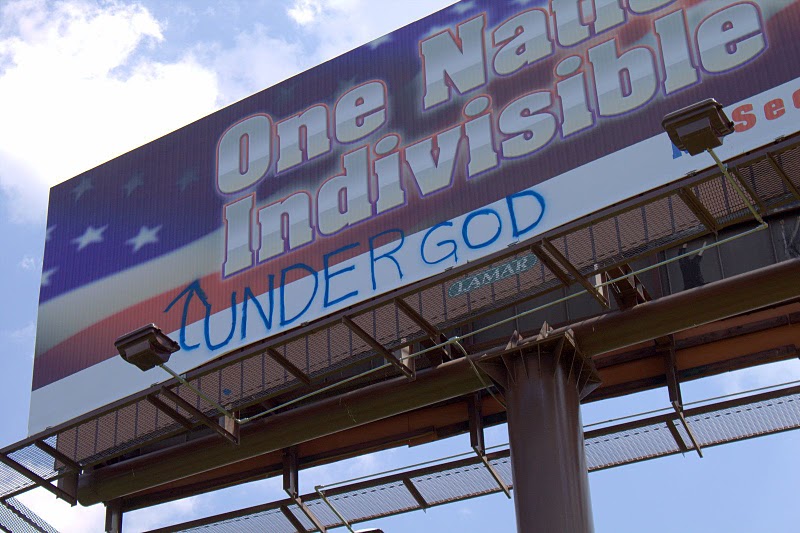 The Institute for Creation Research had put out a message that essentially said vandalism is wrong, but they can understand why someone would do it:

While vandalism should not be condoned, these recent events shed light on what some Americans will do when they feel that their freedom of speech is threatened.

I thought that was bad.

Now, WorldNetDaily isn’t even trying to hide their joy about what happened. Here’s what Chrissy Satterfield has to say in an article titled “My Kind of Vandals“: 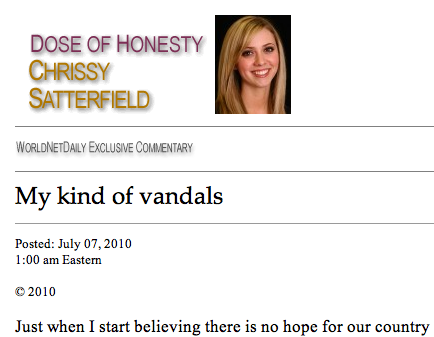 Just when I start believing there is no hope for our country I get a little reminder from my God that all is not lost… It’s nice to know that I am not alone in my beliefs and that some people are still willing to stand on the right side of truth.

Never would I encourage vandalism, but in this case I think I’ll let it slide. Atheists have been vandalizing my beliefs for years, so it’s about time the shoe was on the other foot.

We point out the faults of religion — on blogs, in books, during debates — and you think that gives someone the right to destroy our property?

She’s thrilled that the billboard was ruined:

The best part of this whole situation, though, is that these secular billboards were part of a Fourth of July project that placed similar ads in Greensboro, Raleigh and a handful of other cities –- and it totally backfired. They underestimated their demographic, and because the vandalism occurred days before the Fourth, no one could service the billboard until after the holiday. It’s the small victories in life that make it all worthwhile.

What else does Satterfield consider a “small victory”? Stealing candy from a baby?

She must be getting all this from that one parable in the Bible. It’s the one where Jesus sees a paralytic man and then points and laughs at him.

***Update***: The billboard in question was actually fixed/replaced on the Friday before the Fourth of July holiday…. so much for a “victory.”

Incidentally, when was the last you heard about a Christian billboard that was vandalized? It happens all the time, yet it’s never “newsworthy.”

Give me examples. You say it happens all the time and provide no links whatsoever.

Atheists are always saying how offended they are by, well … everything. How is this billboard not offensive to me? I’ve said it before and I’ll say it again: Where’s my PC? And who’s protecting my right not to be offended?

You don’t have a right not to be offended. Go ahead. Put up your own billboard (with your own money). It can say whatever you’d like. We might poke fun at it, or write about how dishonest or misguided it might be, or put up our own billboard in response.

But I can’t think of any atheists who would even think to vandalize it. We support freedom of speech, including speech that we dislike.

In case you thought she was done making a fool of herself, Satterfield continued:

I would like to extend my deepest thanks to the man or woman responsible for this vandalism. I appreciate the action you took. Thank you for reminding me that I’m not alone. It took a lot of guts to do what you did –- and the fact that you haven’t stepped forward to take credit makes you a hero. It shows everyone that you are more devoted to the message than you are to the spotlight. I encourage you to keep your cover. Don’t give the secular world a reason to call your name; instead, let them call for our God.

I wish I could say this was a Poe. But it’s not. It’s really what she believes — and who knows how many WND readers agree.

If a Christian group would like to respond to this tripe in a positive way, they could always pay for a new atheist billboard. It would suggest: “We may disagree with your beliefs, but we defend your right to believe them. And Satterfield does not represent the true meaning of Christianity.”

Yeah, I’m not holding my breath for that…

It’s incredible how anyone could defend this sort of ludicrous logic, that vandalism can be condoned if you dislike what you see.

I am not happy that vandalism seems to be the only way to get an atheist’s attention.

Here’s how to get an atheist’s (or secularist’s) attention:

* Place the Ten Commandments in front of a court house (only two of which are actually against the law!)
* Have a National Day of Prayer
* Place religious displays on public property (nativity scenes etc.) while denying any other religions’ displays
* Have a prayer before a public meeting
* Have teacher led school prayer in public school
* Teach Creationism as a viable alternative to evolution
* Allow Judges to give different sentences based on the defendant’s religion (or lack thereof)
* Ban gay marriage because a Holy Book says it is wrong
* Allow teachers to use corporal punishment because a Holy Book says “spare the rod, spoil the child”
* Stop scientific progress in certain areas because some religions are uncomfortable with it (stem cell research)

And any number of other thing that the US does solely because of religion when it is supposed to be a secular country.

***Update 2***: A few local university professors are going to be discussing the billboard defacement on the radio talk show “Charlotte Talks” tonight at 9:00 ET

Thanks to Michael for the link!

July 6, 2010
If Christians Would Listen, What Would You Say to Them?
Next Post