Lately, in large part due to this post, I’ve heard from a couple different Christians who insist that while they may believe that homosexuality is a sin, they do love gay people and they think gay people deserve to be treated equally — the includes the right to marry even if their own church wouldn’t marry them.

While it’s not perfect, I don’t mind it. If you’re for equal rights for all people, I don’t really care what you personally believe about homosexuality. It’s a secondary issue, anyway.

But here’s a clear case of bigotry.

She explains how she came to her decision in the video below.

There was one part in there that disgusted me the most:

After listening to those both for and against House Bill 444, I have gained a new appreciation for just how deeply people of all ages and backgrounds feel on this matter and how significantly they believe the issues will affect their lives.

Few could be unmoved by the poignant story told to me in my office by a young big island man who recounted the journey he had taken to bring himself to tell his very traditional parents that he was gay. I was similarly touched by the mother who in the same office expressed anguish at the prospect of the public schools teaching her children that a same-gender marriage was equivalent to their mother and father’s marriage.

So this man’s coming out to his parents — and perhaps ultimately wanting to be in a legal marriage with someone he loves — carried the same weight as some mother who couldn’t handle her daughter knowing that straight people and gay people can all get married.

Lingle is saying she doesn’t want to give gay people equal rights because some irrational mother is too afraid to teach her child to love and respect other people? Ugh…

She goes on to explain why she vetoed this particular bill when it wasn’t even about gay marriage (which she had openly opposed):

“It is essentially marriage by another name… because it has the same rights, benefits, responsibilities and protections.”

Which of those four things is she against gay people having…?

All this from a woman who loves marriage so much, she got married (and divorced) twice.

The alternative newspaper, Maui Time, had two covers prepared to run based on what Lingle decided: 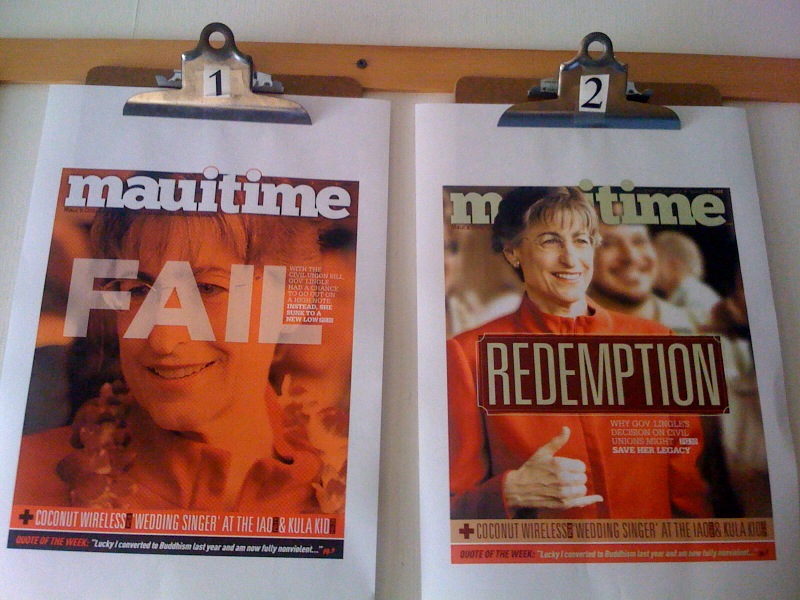 Take a wild guess which one they’re going with now.

Joe. My. God. has a lot more information about all this, including the fact that the ACLU and Lambda Legal are planning to sue.

I want to see any Christian who finds this despicable to say so. Blog about it. Tell your Facebook friends. Tell your church members. Call out anyone who disagrees.

If you don’t, you’re part of the problem.

Don’t tell me you love gay people and think this was the wrong decision… and then sit back and say/do nothing in response. I don’t care for your apologies if you’re not backing it up with action.