Atheist Billboard in North Carolina Vandalized Within a Week

Remember the billboard that the North Carolina Secular Association put up along the Billy Graham Parkway this past week? 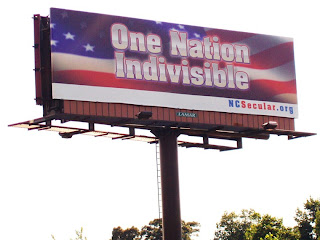 I can’t wrap my head around this. What is so horrible about the billboard; the unity part or the patriotism part?

Neither is good enough for the vandal(s) if God isn’t mentioned in the phrase.

Hopefully, Lamar Advertising will replace the billboard at no cost to the atheist group and there will be some free publicity as a result.

(via The Southern Atheist Gentleman)

June 26, 2010
“One Nation, Indivisible” Billboard Comes to Florida
Next Post

June 27, 2010 Christian Right Group Tells School to Call ACLU’s Bluff
Browse Our Archives
What Are Your Thoughts?leave a comment