Muhammad Believed in… What?

The Exploring Islam Foundation has put up a series of “Inspired by Muhammad” ads on buses in London. 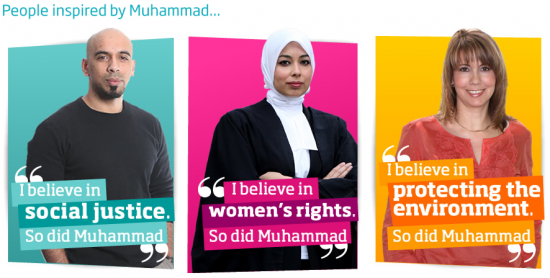 Because when you think Muhammad, obviously the first things that come to mind are social justice, women’s rights, and the environment…

(Women’s rights? Really?! The woman saying that is wearing a hijab, something that many Islamic women are forced to wear!)

This commenter debunks every one of those claims above.

The campaign posters show British Muslims saying things like: “I believe in protecting the environment. So did Mohammed.” Funniest of all is a woman barrister in a headscarf who fronts the poster: “I believe in women’s rights. So did Mohammed.” Unless, like the female poet Asma bint Marwan, you did something Mohammed didn’t like. (According to various hadiths, he had her killed for criticising Islam.) Or unless, like his bride Aisha, you were nine years old and he decided, at the age of 52, that it was time to consummate the marriage.

A blogger at Uzza’s Notes created alternative versions — and, unlike the original ads, the blogger backs these up with citations from the Koran: 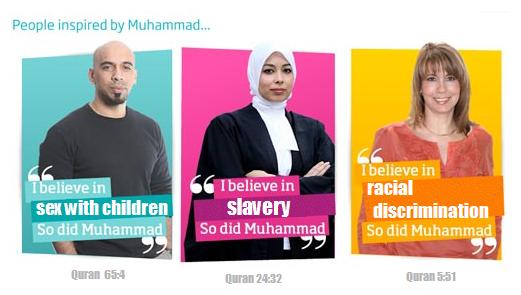 The parodies are gonna be ripe for this one…

Even Jesus and Mo are getting in on the action: 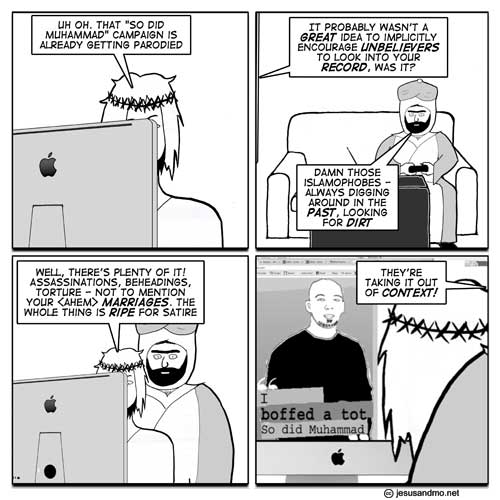 It’s a nice attempt at a campaign. There’s obviously something wrong with the image of Islam. But unlike the image problems for atheism (that prompted all of our ads), the negative perception of Islam isn’t unwarranted.

Radical Muslims, no doubt, have done awful things and continue to do them.

But Moderate Muslims aren’t helping their cause.

They don’t do nearly enough to criticize the radicals. Sure, they denounce violence in the name of Islam, but how often do you hear them denouncing things like the female face coverings? Anyone remember when they got mad at us for drawing images of Muhammad? One of the most outspoken moderate Muslims, Eboo Patel, compared atheists’ harmless stick figure drawings to a swastika!

You’ll never see an ad in this “Inspired by Muhammad” campaign that says “I believe in free speech. So did Muhammad.”

Or “I believe in peace. So did Muhammad.”

Or “I believe in religious freedom. So did Muhammad.”

Because even the ads creators know those posters would just lead to raised eyebrows and laughter.

June 23, 2010 Christian/Atheist Dialogue in Chicago Tonight
Browse Our Archives
What Are Your Thoughts?leave a comment