The Secular Student Alliance staff has been seeing a new development on colleges lately.

In our ten years of existence, we’ve worked hard to get a group for non-theistic students going on campuses nationwide. We have over 200 affiliates at the moment and that number is rising fast: 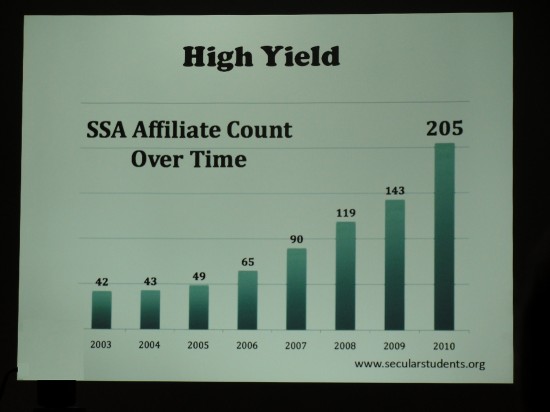 (It’s rising *really* fast, actually. We could always use your support.)

So what happens as these group numbers go up…?

One effect is that you start seeing TWO affiliates on ONE campus.

Why does that happen?

The original reason that we began to see two groups on one campus is that enthusiastic students would start a secular student group unaware that there was already a similar group on campus… Sometimes these groups end up merging when they find out about one another; in other cases, they continue as independent-but-cooperating groups.

Another reason we might see two groups on one campus is a difference in ideology or desired activities. A campus might have one “aggressive” atheist group focusing on activism and speaking out against the ills of religion, while another group provides a community for humanists looking to cooperate with religious groups on community service projects. Both ideologies and activity areas are legitimate, but they appeal to separate types of students.

A third reason to have more than one group on a campus is for demographic reasons. Some universities have separate groups for grad students and undergrads to meet the varying needs of these two communities.

The last reason we see two groups on one campus, and a reason that does draw some concern, is when a campus group splits because of internal conflict… Because this kind of split can be so harmful to everyone involved, we highly recommend that our affiliates seek more diplomatic solutions to these kinds of problems.

There are a number of benefits to having multiple atheist groups on campus… and a couple downsides, too. The SSA’s website elaborates on all of this.

Think about that for a second. I know when I was in college, I couldn’t even find one group for like-minded, non-religious people. I had to start my own. The thought of having a couple different options? That blows my mind.

This must be what it’s like to be a Christian at a college.