Hey, Chicago Tribune, What Up With That? June 17, 2010 Guest Contributor

Hey, Chicago Tribune, What Up With That?

Because I read the Chicago Tribune article about the Freedom From Religion Foundation’s latest bus ads online last night, I didn’t pay too much attention to the print version in today’s paper.

When I checked it out earlier today, though, I noticed this at the end of the article, urging people to comment on the Tribune’s website: 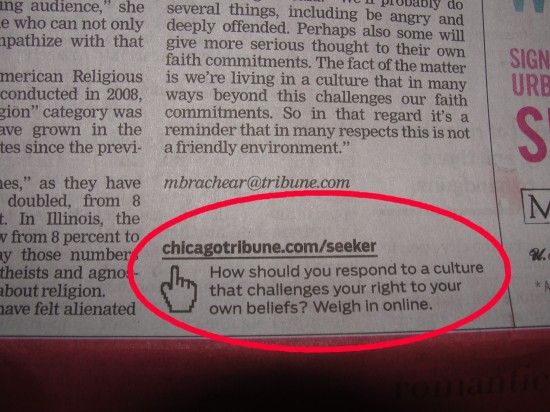 How should you respond to a culture that challenges your right to your own beliefs? Weigh in online.

The FFRF bus ads are not at all challenging people’s right to believe whatever they want.

Everybody has a right to their own beliefs. FFRF — just like every major atheist group in the country — believes in the freedom of religion.

What a horribly worded question.

I don’t know who wrote it, but an editor somewhere at Tribune Tower dropped the ball on this.

***Update***: Some of you in the comments are saying the wording is fine, assuming that the question is intended for atheists. (How should atheists respond to a culture that challenges your right to your own beliefs? Weigh in online.)

Considering that the majority of the Tribune’s readers are presumably religious, I’m not sure I agree it’s referring to atheists.

I could see it going both ways. But if that’s the case, it’s just more evidence that the question is poorly worded.

***Update 2***: I’ve been told by the Tribune that the wording is from (Humanist) Rabbi Adam Chalom‘s blog post on the subject. He’s writing about it in reference to religious people who challenge atheists. NOT the other way around.

I’m not sure why they used it — it’s confusing without any context. A clarification should be issued.

June 17, 2010
Ask Richard: When Will I Stop Feeling Angry About My Religious Past?
Next Post