I’m reading Ayaan Hirsi Ali‘s book Nomad — it’s incredible; you all need to check it out — and her story is very similar to that of Canadian Aqsa Parvez.

Bother families were ruled with an iron fist by the father. Rebellion wasn’t allowed. Marriages were decided by the father, too.

Ali managed to run away from her Muslim family.

Parvez did not have that chance.

Her family got to her first. 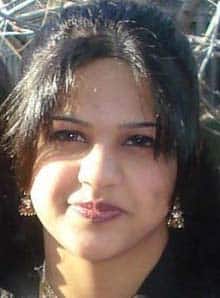 Aqsa Parvez, 16, the youngest in the family, dared to challenge her father’s rule.

She first refused his demands to wear the hijab and the traditional Pakistani clothing her four older sisters always wore. She hung out with girls outside her own culture and when things became intolerable at home, she opted to live in a shelter.

Even when Parvez relented, and allowed her to wear urban-style jeans and T-shirts to school, she still wanted more freedom. Her father wouldn’t allow her to go to her friend’s homes or to the mall on the weekends. Even talking on the phone at night was forbidden. Eventually, she ran away for a second time.

On the morning of Dec. 10, 2007, Aqsa was murdered in the basement bedroom of her Mississauga home. Her room was the only bedroom without a door.

She had been strangled by her assailant’s bare hands.

Her assailant was her older brother.

Everyone, including Aqsa, knew something terrible was going to happen to her. She told her high school’s counselor her dad was going to kill her. Look at what her mother said:

In a chilling police interview on the day Aqsa was killed, her mother crying and talking out loud to herself, was recorded as saying she thought her husband was only going to “break legs and arms,” but instead “killed her straight away.”

As if the former were any more acceptable…

Today, the father and the brother will be sentenced — they pleaded guilty and they face life sentences in prison. But they could be paroled after a decade or two. These monsters should not be allowed back in public.

There’s no honor in these “honor killings,” a misnomer if ever there was one. These are committed by men who are cowards and can’t take a woman defying their rules. This is religion at its worst.

June 16, 2010
Leaving Godless Leaflets on Their Cars
Next Post