Michael Largo is the author of God’s Lunatics, a book being published by Harper Paperbacks later this month. 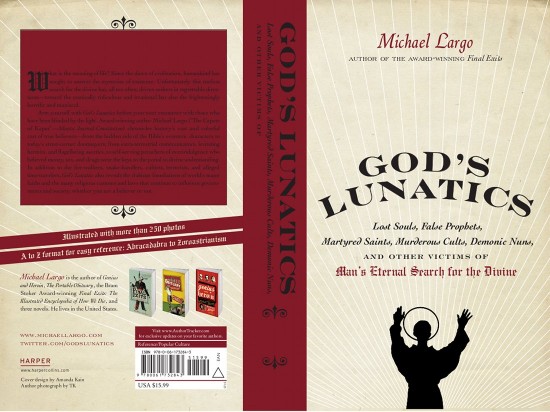 What is the book about?

[It] chronicles history’s vast and colorful cast of true believers — from the hidden side of the Bible’s eccentric characters to today’s street-corner doomsayers, and from extraterrestrial communicators, levitating hermits, and flagellating ascetics to self-serving preachers of overindulgence who believed money, sex, and drugs were the keys to the portal to divine understanding. In addition to the firewalkers, serpent handlers, cultists, terrorists, and alleged time travelers, God’s Lunatics also reveals the dubious foundations of the world’s major faiths and the many religious customs and laws that continue to influence governments and society, whether you are a believer or not.

His publishers are giving away three free copies of the book to readers of this site!

All you have to do is provide an answer to the following question:

Name the historical figure who, in the name of religion, caused the most harm to humanity.

The most interesting (or entertaining) answers, as selected by me, will receive a copy of the book. The contest ends in two weeks and it’s only open to people living in the U.S. (Sorry!)

Feel free to “vote” for your favorites in the comments, too 🙂

May 31, 2010
Miami Herald Columnist Uses "No Atheists in Foxholes" Phrase
Next Post