My Day at an Anti-Vaccination Rally May 27, 2010 Guest Contributor

My Day at an Anti-Vaccination Rally

This is a guest post by Jamie Bernstein. Jamie is a graduate student in public policy at the University of Chicago.

I am generally not the activist type. It’s not that I don’t have strong opinions or don’t care deeply about a variety of issues, but I just generally don’t like to go to rallies or protests. However, when I received an email two nights ago from Bruce Critelli saying that the anti-vaxers were going to have a rally right here in Chicago and that the keynote speaker would be Andrew Wakefield, the man who recently lost the right to practice medicine in the UK and wrote the thoroughly discredited study touting a link between vaccines and autism, I knew I had to go. I wasn’t planning on protesting and didn’t want to cause a scene — I just wanted to genuinely try to hear what they had to say… and document the event. The Women Thinking Free Foundation mobilized quickly to make this happen.

After my last class I ran out the door to catch the bus to downtown Chicago. I showed up 45 min late, but it seems I didn’t miss much. There were about 100 people there, though probably about half were wearing staff shirts and most had identical anti-vax signs that had been handed out by the rally organizers. There were a handful of people staying out of the way in the back handing out “fact cards” with information discrediting Wakefield and providing true facts on the safety of vaccines. I didn’t join them because I didn’t want to be “outed” but I felt more comfortable knowing they were nearby. 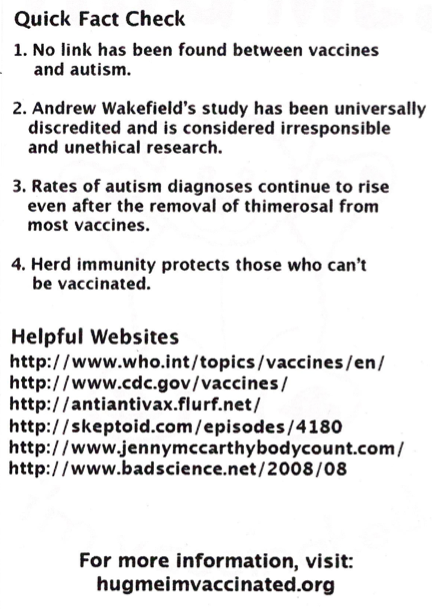 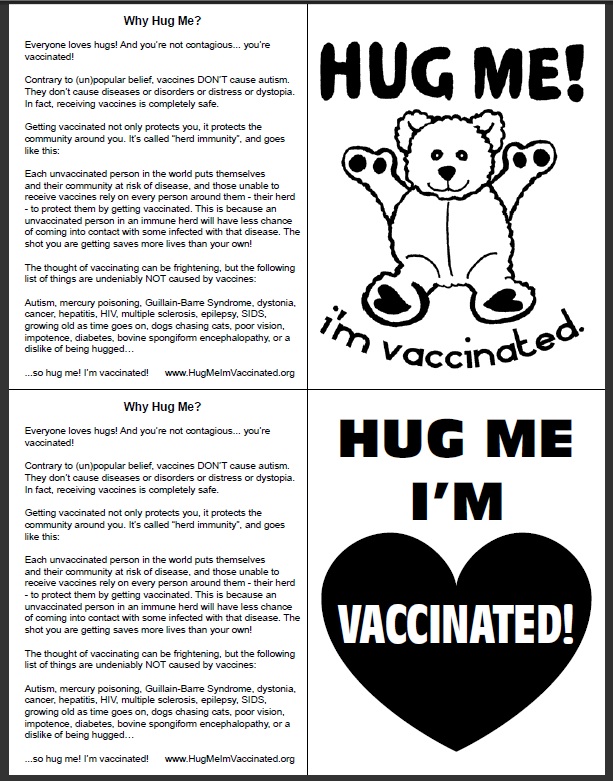 When I first walked in, my heart was pounding. I felt like any second someone there would see me and shout “She’s not one of us! Get her!” and a hundred mothers and their children would suddenly sprout fangs and attack me in a feeding frenzy. Instead I saw Bruce in the crowd and ran over to him so I’d have someone to talk to throughout the rally.

Generally the crowd consisted of mothers with their young children. It looked sweet until I started listening to what the speakers were actually saying. Words like “Nazis,” “eugenics,” “world order,” and other bogeymen brought up to terrify parents were tossed about with what seemed like utter disregard toward their true meaning.

Most of the speakers focused on painting a picture of the people who tout vaccines as evil. And, I’m not talking “Glenn Beck evil” here, I mean Hitler/Al Queda evil. In their view, pharmaceutical companies commit blatant fraud, creating horrible, toxic, poisonous substances like vaccines and acetaminophen (yep, Tylenol is EVIL!) and then making up lists of benefits and selling it to the public under the lie that its good for you. And don’t forget the government. Clearly the government is in the pocket of BIG PHARMA (capitalized because every time anyone mentioned BIG PHARMA, it really sounded capitalized). They get money from BIG PHARMA in order to turn their heads even when they know people are taking fraudulent products, and some even get enough money to convince them to legislate mandates and subsidize vaccines.

Oh, but while we’re at it, don’t forget your family doctor. S/he’s in on it too. See, they just really love to stick needles in your child’s arm. When you try to tell your doctor that you did that googling thing and read some stuff from a YouTube commenter on the internets and are sure that your son got autism from vaccines, your doctor will just laugh and you. Why? Because doctors think they are so smart from going to school and hate mothers and children. That’s why they became pediatricians in the first place, just so they can poison children then laugh about it afterward while rolling in their BIG PHARMA money.

I know this sounds like I’m exaggerating, but I’m completely serious. This is right along the lines of things said by speakers at the rally. Don’t believe me? Listen to the song “Vaccine Gestapo” by The Refusers — really just one guy (Michael Belkin) who sings along to a recording (serious!). The lyrics are here. Not only is it a terrible song but at the rally he played this song while mothers danced with their children. It was highly disturbing. 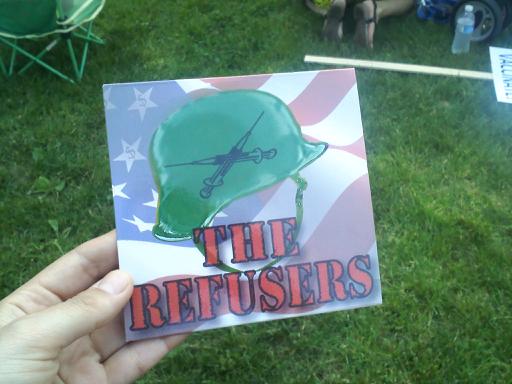 Finally, near the end of the rally the infamous Andrew Wakefield took the stage to cheers from a worshiping crowd. It was Andrew Wakefield, a victim of BIG PHARMA and a martyr to mother’s everywhere. There are few people in the world that I can truly say I hate, but he is one of them. The damage that he has done by scaring parents into not vaccinating their children and thereby leaving them free to contract deadly-yet-preventable diseases is beyond words. In order to keep myself from running up onto the stage and punching him in his smug little face, I contented myself by reading snarky comments on Twitter from all the people watching on the live internet feed.

After the rally I went and spoke with some of the other pro-science people who had showed up. At some point Bruce and I saw that Andrew Wakefield was particularly accessible and decided that we wanted to get a picture of him. I went up to him and asked and next thing I knew Andrew Wakefield had his arm around me setting up for a happy, smiling picture. Up until this point I had been wearing my “Hug Me I’m Vaccinated” Surly-Ramic necklace from Skepchick Amy hidden under my shirt. Right before the picture was taken I pulled it out and flashed a smile to the camera. Andrew Wakefield had no idea what just happened. 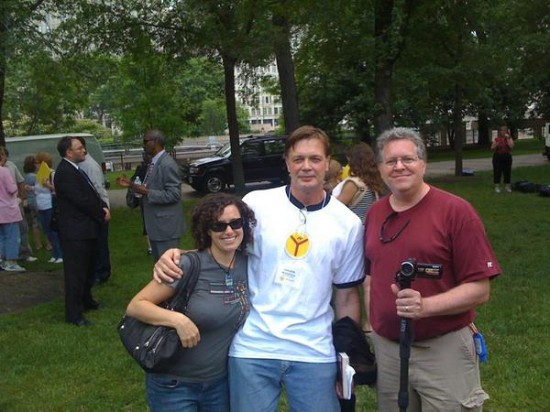 (From left to right, that’s me, Andrew Wakefield, and Bruce Critelli.)

As I left, I shook his hand and handed him a folded note I had handwritten the night before. I asked him if he would read it later when he got a chance. He told me he would, thanked me, and put the note in his pocket.

The note said the following:

I know that you truly believe that what you are doing is helping people and that the ends justify the means, but I just want you to know that the things you are doing –- the actions you have taken in the past have hurt people –- killed people. Your work has scared and manipulated parents into not vaccinating their children, putting them and their entire community at risk, all in the name of safety. Children have died because of you. I just want to make sure that you fully understand that.