I’m usually so proud of the way atheists are willing to stand up for their views.  But watching the drama unfold around Everybody Draw Muhammad Day, I’m left wondering what changed… and I’m a little disappointed.  It’s strange to see atheists arguing and criticizing each other for promoting an important message for fear that the message might offend people.

Some Secular Student Alliance affiliates had an important idea to express: “No religious figure should be so revered as to be off limits to criticism or even portrayal. We do not believe Muhammad is holy and we should be free to draw him.” After Matt Stone and Trey Parker had their lives threatened, it became more apparent than ever that this message needed to be said.  And there is no better way to say it than with images of Muhammad.

So they decided to draw Muhammad.  They bent over backward to provide accompanying messages, blog posts, and op-eds giving the context of their free-speech message.  But they were met with social uproar from their Muslim peers, from the Interfaith Youth Core, and even from members of the atheist community.

To me, the most puzzling objection came from Greg Epstein, who at least seems to understand the students’ motivation. In a piece on CNN.com, he writes:

There is a difference between making fun of religious or other ideas on a TV show that you can turn off, and doing it out in a public square where those likely to take offense simply can’t avoid it. These chalk drawings are not a seminar on free speech; they are the atheist equivalent of the campus sidewalk preachers who used to irk me back in college.

Let’s put this in perspective of the atheist movement’s past efforts.

About a year and a half ago, the American Humanist Association bought advertisements in major newspapers and in buses asking “Why believe in a god?  Just be good for goodness’ sake!”  Since then, the United Coalition of Reason organized local groups in two dozen regions to band together and buy large billboards proudly bearing slogans like “Don’t believe in God? You are not alone” and “Are you good without God? Millions are.” The campaigns were met with outrage, repeated vandalism, and people taking offense.

The billboards and bus ads were not statements that could be turned off.  They were unavoidable for people driving down the street or riding the bus: the messages were shoved in their faces. But Epstein had no problem with the billboards and bus ads – the book tour for his New York Times bestseller Good Without God rode the campaign’s coattails, gaining attention from the excitement they stirred up.  And while there was the occasional atheist who asked why we bothered to “evangelize,” there was nowhere near as much worry over hurting people’s feelings.  Epstein and the rest of the atheist community paid no mind to the people who shouted that they were offended.

And there’s no question that people were offended by the ad campaigns.  Even high-ranking politicians were willing to condemn them.  Iowa Governor Chet Culver bashed the local bus ads which read “Don’t believe in God?  You are not alone” and insisted that – you guessed it – he was offended:

“I was disturbed, personally, by the advertisement and I can understand why other Iowans were also disturbed by the message that it sent,” Culver said.

The question will likely become a legal battle, Culver said. He deferred questions of whether the group deserves the same free speech rights as Christian organizations to advertise on the buses to the Iowa Attorney General.

Culver also declined to answer if he would also have gotten off the bus had he been a rider, but noted that he would have been offended by the ad’s message. 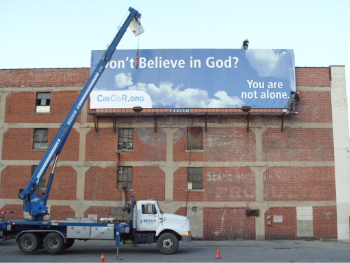 The Cincinnati CoR billboard was taken down and moved after the site’s owner received “multiple, significant threats.”

To drive the comparison home, look no further than what happened in Cincinnati: the billboard had to be taken down and moved because the landowner of the site received multiple threats.  Did we ask ourselves whether we should have kept quiet or found another way to make our point?  No, we realized that our statement was more important than ever.

When someone takes offense, we need to use it as a wake-up call that we’ve crossed a line in their eyes and ask ourselves whether to step back.  Sometimes we should – people get offended by swastikas, blackface, and slurs because they promote deplorable ideas.  But what lines are being crossed by the two campaigns before us?

Some religious people got offended because we were disputing a cherished belief: that religion is necessary in society.  In their eyes it crossed a line for us to question such a sacred belief.  But the entire purpose of our ad campaign was to challenge that belief, so we ignored the offense and pressed onward.

Some Muslims got offended by drawings of Muhammad because the images didn’t give their prophet as much respect as they feel he deserves.  In their eyes it crossed a line for us to give him less than that level of respect.  But again, that is exactly the line we are intending to challenge.  We want to challenge the claim that Muhammad is so holy that he’s off-limits to critique or portrayal.  So we ignored the offense and pressed onward.

I see remarkable parallels between the two campaigns.  Not all offense is worth altering course for.  We understood that when it came to our billboards and bus ads.  We need to wake up and apply the same thinking to Draw Muhammad Day.

May 24, 2010
South Dakota's Tea Party Candidate for Governor Tells Churches to Endorse Him
Next Post