Reactions from Everybody Draw Muhammad Day May 22, 2010 Guest Contributor

Reactions from Everybody Draw Muhammad Day

How is it possible that I got more Muhammad images *after* I posted the compilation than before it?

I don’t have time to post all the new ones I’m getting but this one by Louis made me laugh: 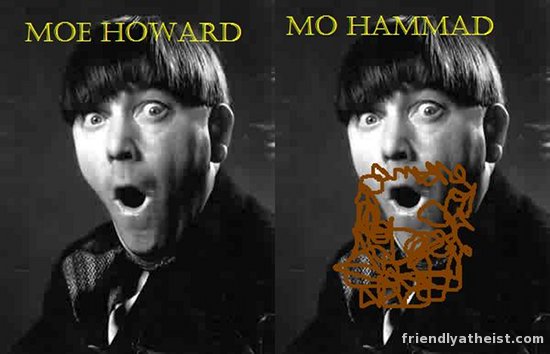 And this one from Lyz was simple and effective: 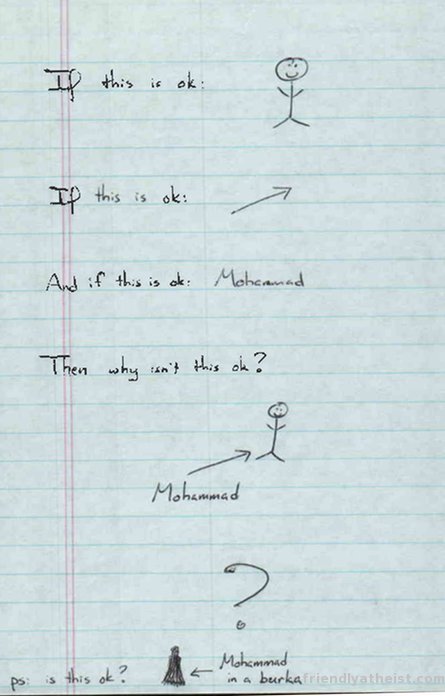 A few other Everybody Draw Muhammad Day related activities have also happened since Thursday.

The University of South Carolina Pastafarians couldn’t chalk their campus, so they put up flyers with the image of Muhammad:

“Our participation in this event is not to promote blasphemy or religious hatred,” said Pastafarians president Axton Crolley. “It is to be able to act on the freedoms guaranteed us by the constitution without fear for our safety afterward.”

“In recognition of Benjamin Franklin’s great insight that ‘Those who sacrifice liberty for security deserve neither,’ we must peacefully assert and exercise our rights for their safety and longevity, and encourage others to speak up as well,” Crolley added.

There was no major backlash there as far as I know.

Harvard’s Humanist chaplain Greg Epstein wrote a piece for CNN about the day. In an email from his office, the piece was touted this way:

Greg takes a balanced view, affirming the need for freedom of expression and the good intentions of those who have used the Day to defend it…

The problem is he is sticking up for the Muslims who are “hurt” by the drawings and not the atheists who are courageous enough to draw Muhammad.

He commended the Muslim students for responding to the Muhammad stick figures by adding the word “Ali” to many of the drawings:

As an atheist (or better yet, call me a Humanist: one who emphasizes doing good without God) who longs for fellow Humanists to gain respectability in this religious nation, I begrudgingly admit the Muslims’ approach in this incident is superior in humor and civility.

“Superior in humor and civility”? Hardly. It was clever, sure, but it just showed me that they can’t stomach the idea of anyone else not honoring their personal beliefs. That’s far from superior.

It gets worse later on, when Greg criticizes the atheists’ drawings:

These chalk drawings are not a seminar on free speech; they are the atheist equivalent of the campus sidewalk preachers who used to irk me back in college.

In other words, Greg is saying these two things are identical: 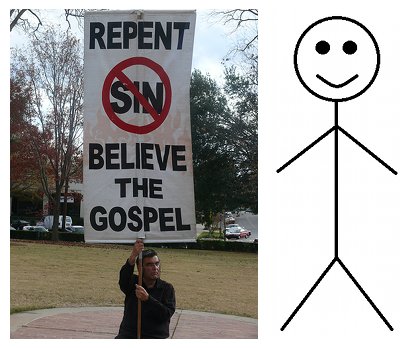 Greg defends Eboo Patel, who called the atheists who drew the stick figures “jerks” and “bigots” (even though Greg says they’re not bigots):

What Eboo and other Muslims are saying when they criticize the chalking campaign is, ‘please find a less hurtful way to protect free speech; you’re within your rights to do it this way, but we can’t help but see it as, at best, unfriendly in the extreme.’

No. What the moderate Muslims are saying is: “Free speech is fine but only as long as you never criticize our beliefs.” And that’s not free speech at all.

They’re welcome to dislike it. But that’s about it.

The atheists are the brave ones here, not the Muslims who have to (*gasp*) walk past smiling, happy stick figures.

Meanwhile, Patel is being especially deceitful. As one friend pointed out, look at what he writes in this piece for Inside Higher Ed:

In case you missed it, “Everybody Draw Muhammad Day,” which is today, is a campaign that has hit several campuses already and has the potential to scale, fast.

The only ingredients you need are a handful of students who believe they are crusaders for free speech, some chalk and the cover of darkness.

“Cover of darkness”?! Implying that the atheists drew the images secretly, when no one else was around? That’s not true at all.

The atheist groups didn’t do this with stealth, after midnight, cloaked by the darkness. Hell, a couple of the groups even emailed the Muslim student leaders beforehand to let them know what they were doing! They did it right out in the open for everyone to see.

I have yet to hear a convincing argument as to why atheists should not have drawn Muhammad.

As long as Muslims keep objecting to it (and use threats and violence to put a stop to it), we’ll keep drawing Muhammads in response.

May 22, 2010
Stolen Mojave Cross Which Was Replaced Is Taken Down Again
Next Post

May 22, 2010 Fargo Native Wants ISNOGOD License Plate
Browse Our Archives
What Are Your Thoughts?leave a comment