***Update***: If you took any pictures at the event, please tag them as “GreatGlobalKissin” on Flickr so a compilation can be put together!

Man, all hell broke loose the last time I wrote about a Kiss-In.

But it’s happening again and it’s bigger and better than ever.

So what is a kiss-in?

This kiss-in is to make a public statement for love, freedom and equality in your local community. A kiss is a simple expression of love and affection between two people who love each other — there is nothing vulgar, obscene or disgusting about it.

Acts like the Great Global Kiss-in are important. Simple acts of affection between people of the same gender are still seen as shocking and taboo and can too often lead to violence. The larger issue of “men kissing=gross”, for example, is not an uncommon theme in television… the media, and in society in general. Highlighting the differences between the way we view and treat those couples and their heterosexual counterparts can be illuminating and freeing.

Affection between same-sex couples or gender non-conforming couples is not out of the ordinary and shouldn’t be something that leads to violence or hate. We shouldn’t be afraid to hold hands, kiss our partners or spouses, or be like any other couple when it comes to being affectionate and showing our love and commitment. The old meme of “I don’t care what they do as long as they don’t shove it down my throat” is a false double standard from those uncomfortable with LGBT people that needs to be challenged. Showing love and affection is natural and should be treated as such — whether between opposite-sex couples or same-sex ones.

Hopefully, a day will come when events like the Great Global Kiss-in aren’t necessary or acts of rebellion. Until then, we keep fighting one kiss at a time.

It doesn’t matter if you’re straight or gay, go kiss someone in any of the public meeting spots and document it!

Some of the events have already taken place, but some are happening Sunday and Monday.

There’s a way you can still participate: 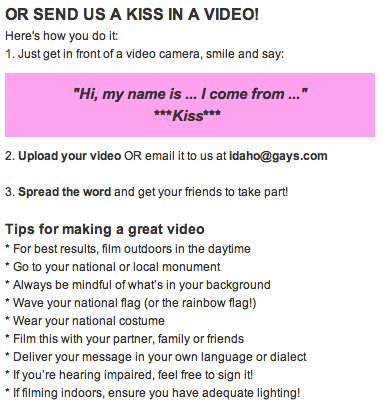 Videos of the events will be posted here later.