Now, We Can All Review Churches May 14, 2010 Guest Contributor

Now, We Can All Review Churches

***Update***: The story appeared on the Chicago Tribune’s front page (at the bottom):

And if you turn the pages to read the rest of the story…? 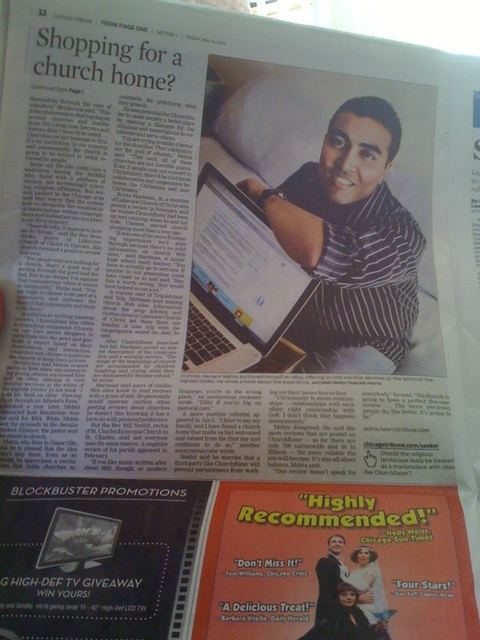 The folding of my shirt as I lean over makes my body look oddly-shapen. Oh well. Still kinda cool!

I’ve mentioned ChurchRater before — it’s a website where you can rate worship services that you attend, kind of like a Yelp for churches:

Jim Henderson is the man who “bought my soul” on eBay a few years ago. The reason he bid on my auction in the first place is because he loved the idea of “unchurched” people going to church and sharing their experiences.

Jim would take those filled-out surveys and share them with the pastors of these churches, explaining what visitors liked and didn’t like about their visit.

I wasn’t the first person to do this for him, and with Jim’s new site, I won’t be anywhere near the last.

The Chicago Tribune‘s Manya Brachear has an article about the website in today’s paper and I’m mentioned in it:

A graduate student at DePaul University, atheist activist Hemant Mehta avoided being a church hater by becoming a church rater.

Enlisted four years ago on a lark to attend about a dozen Chicago-area churches and honestly rate his experience, Mehta’s beliefs did not change, but his attitude toward organized religion did.

His journey inspired an interreligious group of entrepreneurs to recently launch ChurchRater, a new approach to church shopping modeled after Yelp, a popular Web site where users rate local businesses. By inviting ordinary worshippers to post reviews from the pews, the site aims to help Christians navigate the more than 330,000 churches across the U.S. to find where they fit on Sunday morning.

Mehta, who lives in Naperville, said he is pleased that the idea didn’t stop there. Even as an atheist, he appreciates a mechanism that holds churches accountable for practicing what they preach.

He sees potential for ChurchRater to make society a better place by opening a dialogue for the religious and nonreligious to collaborate and serve others.

“I’m not trying to make it better for the churches. That’s definitely not the goal of atheists,” Mehta said. “That said, all of these churches are not horrible places. Even if people may not convert to Christianity, there’d be a lot more collaboration and cooperation between the Christians and non-Christians.”

The article doesn’t elaborate on that comment, but I was referring to things like the community outreach and volunteer work that many churches do — they don’t proselytize as they help others; they just see it as their “Christian duty” to do good for others, something I would consider a “Humanist duty” as well.

May 14, 2010 Register for the 2010 Secular Student Alliance Conference!
Browse Our Archives
What Are Your Thoughts?leave a comment