Muhammad is not a Swastika May 13, 2010 Dr. Denise Cooper-Clarke

Muhammad is not a Swastika 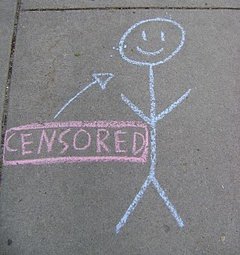 When is society justified in discouraging certain ideas from being expressed? I see this question at the heart of the controversy around our recent “Chalking Muhammad” campaigns.  The issue has never been about the law. Pretty much everyone is on the same page that death threats are unacceptable and that people have the legal right to draw images of Muhammad if they so choose.  But wherever secular students actually try to do it, they’re met with outrage and the school’s Muslim Student Association asks them not to.  Even the atheist community is divided about whether we should choose to draw Muhammad.

Despite being something of a free-speech fanatic, I actually do believe that we should try to self-censor ourselves when the circumstances call for it. Critics of the “chalking Muhammad” campaigns point to many of those cases – but then go wrong by pretending that smiling stick figures of Muhammad fit in the same category. I couldn’t have asked for a better distillation of the misunderstanding than the following passage.  Regarding the freedom to draw Muhammad, Eboo Patel wrote:

Will the free speech cloak protect you from social outrage if you went to a party dressed in blackface? If you chalked a swastika on the sidewalk leading to the campus Hillel? If you stood on the college quad and chanted “fag” at every male with blow dried hair who walks by?  If you applauded as champions of free speech the handful of Palestinian kids horrifically dancing in the streets after 9/11?

… But what idea does drawing Muhammad express? Does drawing a smiling stick figure labeled “Muhammad” somehow marginalize, demonize, or criticize a community? No. This expression doesn’t deserve to be stifled.

I spoke with a leader of the Muslim student group at OSU who told me that depictions of Muhammad are as offensive as swastikas.  The drawings, he said, disrespect the person Muslims consider the holiest and detract from his message. What are non-Muslims being asked not to express? The notion that Muhammad and his teachings are not so holy that he cannot be drawn. That is a request I cannot honor.

The Atheists, Agnostics, and Freethinkers at UIUC (AAF), the Atheists, Humanists, & Agnostics at UW-Madison (AHA!), and Northwestern University Secular Humanists for Inquiry and FreeThought (SHIFT) responded with a simple “Sorry, no.”

It is profoundly disturbing to me that such a statement – “I will not treat the person you consider holy with ultimate respect” – is equated with a swastika.  They’re not even close, and we shouldn’t shy away from asserting it.

That’s why I don’t believe we should censor ourselves in this case – we aren’t saying anything out of line.  As for the benefits of the campaigns, Ayaan Hirsi Ali puts it well in her Wall Street Journal Op Ed:

Another idea is to do stories of Muhammad where his image is shown as much as possible. These stories do not have to be negative or insulting, they just need to spread the risk. The aim is to confront hypersensitive Muslims with more targets than they can possibly contend with.

Another important advantage of such a campaign is to accustom Muslims to the kind of treatment that the followers of other religions have long been used to. After the “South Park” episode in question there was no threatening response from Buddhists, Christians and Jews—to say nothing of Tom Cruise and Barbra Streisand fans—all of whom had far more reason to be offended than Muslims.

The reaction of moderate Muslims is understandable – nobody likes seeing something they value being given less respect than they think it deserves. But they really weren’t the sole target of the campaign. Chalking Muhammad sent the message to everyone in society: “We’re not afraid to show Muhammad less-than-ultimate respect and you shouldn’t be either. Stand with us in asserting that.”

May 13, 2010 Draw Me a Muhammad
Browse Our Archives
What Are Your Thoughts?leave a comment